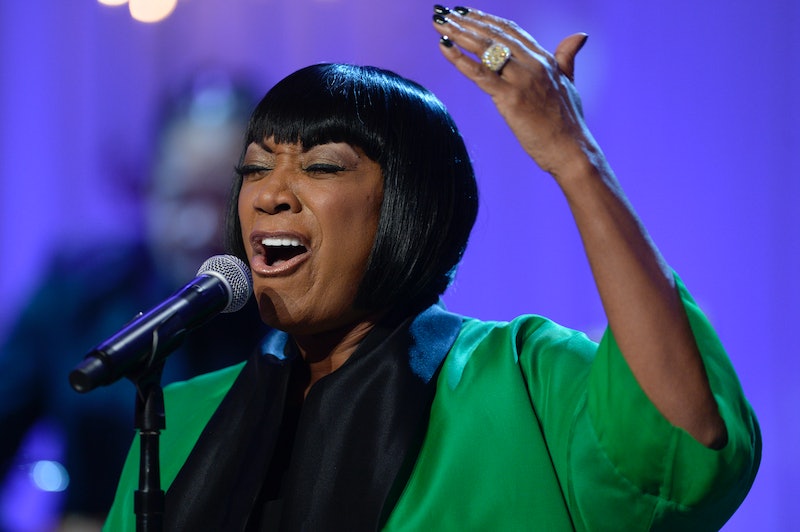 Trading in one famous singer for the next — oh, how we loved you, Stevie Nicks — American Horror Story: Freak Show has officially added pop icon Patti LaBelle to its cast. According to TV Line, Patti LaBelle will have a AHS four-episode stint as the mother of Gabourey Sidibe’s character. What's more? She'll be playing a townsperson who's close to unraveling the murderous doings of Twisty the clown killer. (A clown named Twisty? Or a someone named Twisty who kills clowns? Either way, this season might actually be the creepiest so far.)

The fourth season of Ryan Murphy and Brad Falchuk's anthology series will follow the last American freak show — which is set in Jupiter, Fla. during the 1950s — and its starring acts managed by none other than a German expat played by the fearsome Jessica Lange. In addition to Lange and Sidibe, other returning actresses include Kathy Bates (maybe she won't be racist this time), Angela Bassett (hopefully she'll be just as vindictive), Frances Conroy (bring the fake eye back!), Sarah Paulson (two heads are better than one), and Emma Roberts (she's back, bitch).

By adding LaBelle to the cast, AHS is keeping in line with its history of casting seriously strong females for roles where they will inevitably kick some ass. The only news that could top this casting notice would be if LaBelle was actually going to sing on the show; however, the singer will reportedly not be showing off her vocal range during her four episodes. But that's okay, because we can all just watch Nicks' AHS performances on repeat.