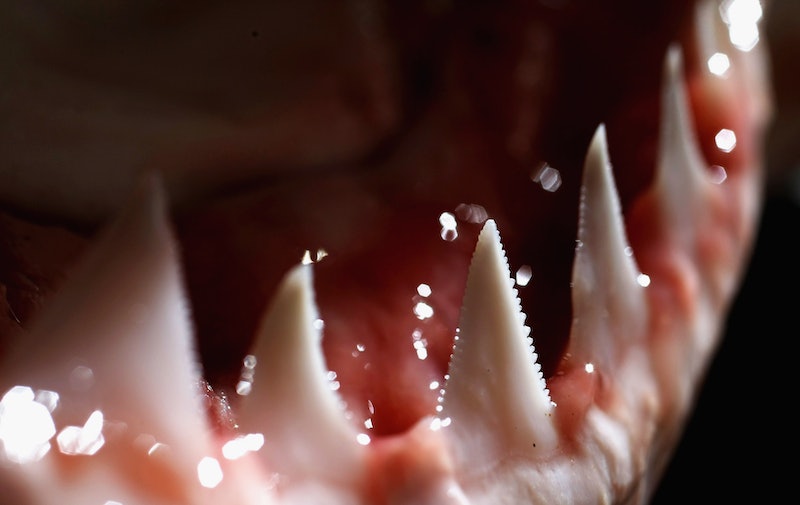 In case you hadn't already guessed it, Shark Week might be fake. True to it's somewhat predictable Shark Week programming, Discovery's got a new "documentary" coming our way Tuesday night: Lair Of The Mega Shark. Shark Week fans will have another chance to kick back, relax, and suspend their disbelief. Lair of the Mega Shark might totally be real (in another world, in a vastly different dimension completely removed from reality), but let's just say, I have my doubts.

Discovery has a track-record of exaggerating the realness of their sharks. Vox reports that on Sunday, Discovery aired "Shark of Darkness: Wrath of Submarine," a two-hour segment about a great white shark the size of a submarine living off the coast of South Africa that has supposedly been known to attack people. The only problem is that, according to zoologist Michelle Wciesel, South Africa's "submarine shark" is nothing more than an urban legend. Brad Plumer writes that the network went as far as to interview fake experts for the segment to help "prove" the existence of the "submarine shark," and likens the show to "shark fan-fiction."

Seems like this might be another Sasquatch situation. Except the shark version of that. Discovery is, however, careful to add a disclaimer to the "documentary," reading "[The Submarine Shark's] existence is highly controversial. Events have been dramatized, but many believe Submarine exists to this day." Good for those people. At least Discovery puts it out there.

Lair Of the Mega Shark sounds like a very similar situation. The mega shark "real" in that it's a legend. Here are five reasons you shouldn't exactly trust its realness (in case, you know, you really wanted to.)

Discovery has fooled us before

Megalodon anyone? Last year, Discovery aired a "documentary" about the megalodon, also referred to as "the world's biggest shark." The "documentary" alleges that Megalodon was last spotted during World War II, which is believable except for the fact that the shark has been extinct for a while. It was definitely the world's largest shark at one point in time, but there's no way anyone's seen it lately. In Discovery's defense, the story is never sold entirely as fact, given that there's a Megalodon promo video on the site called "Evidence of a 50-ton Megalodon?" That question mark is the giveaway.

The Mega Shark could be the next Megalodon.

According to the Mega Shark promo video, all this buzz about a Mega Shark is mostly based on rumors of its existence. Legend has it that a 20-foot shark is out there, but no one's ever actually seen it yet.

The Mega Shark is the subject of a sci-fi movie

That's not to say that a seemingly low-budget sci-fi movie can't be based in reality, but when something crosses into sci-fi territory in an epic fictional battle with a "Giant Octopus," it starts to veer in the direction of urban legend. At least in this particular case.

The origins of the Mega Shark haven't been clearly documented.

According to legend, century-old stories about a 30-foot-long shark have been passed down in the Maori culture, and there are reportedly plenty of fisherman's stories that support the evidence of a giant shark living off the coast of New Zealand. It's also entirely possible that "Mega Shark" was born in a meeting room and that a storyline was crafted to go along with the catchy title.

Entertainment Weekly reports that Michael Sorensen, VP of development and production for Discovery says, “We have brainstorm meetings for titles on every show[...] It’s packed, people throwing out mash-ups: One of my favorites that came out of one of these meetings was Sharkcano. I’m like, ‘I don’t even know what that is, but if we ever find sharks feeding around underwater volcanos, I’m sure there’s a show there.'” He also admits that "a good title often comes first."

The lack of fossil evidence.

The Megalodon's existence has been documented, but there doesn't seem to be any proof that the "Mega Shark" ever lived. It's OK. We still love you Shark Week.