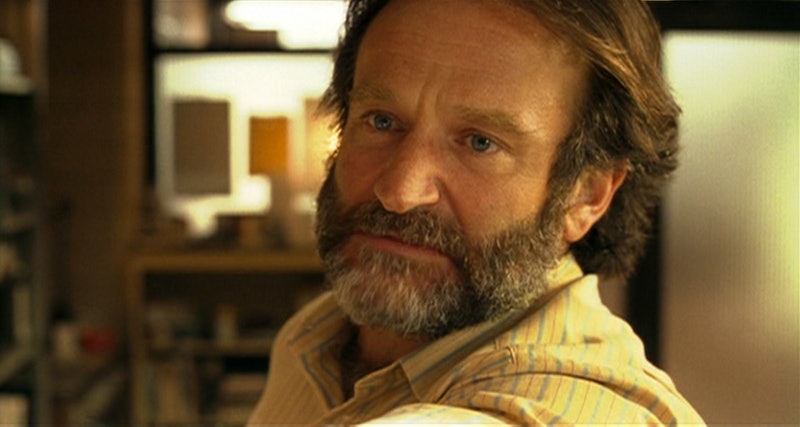 In 1997, Matt Damon and Ben Affleck's movie Good Will Hunting hit theaters. The triumphant little movie that could made us laugh, cry, and try our best to do a Boston accent. It also showed off one man's enormous talent. On Monday, actor Robin Williams died of an apparent suicide at age 63, and with the news comes a flood of memories. The prolific actor had a four decades-long career: From Mork and Mindy to Hook to Aladdin to Mrs. Doubtfire, no role stands out to me more than his portrayal of Professor Sean Maguire in Good Will Hunting. And it all has to do with one little phrase: "It's not your fault."

You likely know the scene as well as I do: Will Hunting (Damon) is reluctantly chatting with Sean (Williams) about being abused as a child. We see in Will's file that he's been brutally beaten by his foster parents. Will asks Sean, "You ever have experience with that?" and what follows is one of the most poignant scenes in the movie. The dramatic performances by both Damon and Williams are so powerful, it chokes me up every time I see it. I've seen the movie roughly 20 times. It's not my fault.

Will and Sean's breakthrough is an emotional pivot point in the film, and yet, it's also one of its most quotable. Sure, "How do you like dem apples" and "Gotta go see about a girl" and "I swallowed a bug" also roll off the tongue, but what makes "It's not your fault" so special is that it's a genuine quote. It's not sarcastic. It's not ironic. It's not supposed to be funny, and it isn't.

Just as we latch onto hilariously memorable lines like "Fuck you and your Irish curse, Chuckie" we grab hold of Sean's emphatic, empathetic phrase, too — but for a different reason. It doesn't make us laugh, it makes us feel. As much as we'd all love to school a Harvard asshole in a bar, we all want to be reassured we didn't do anything wrong even more.