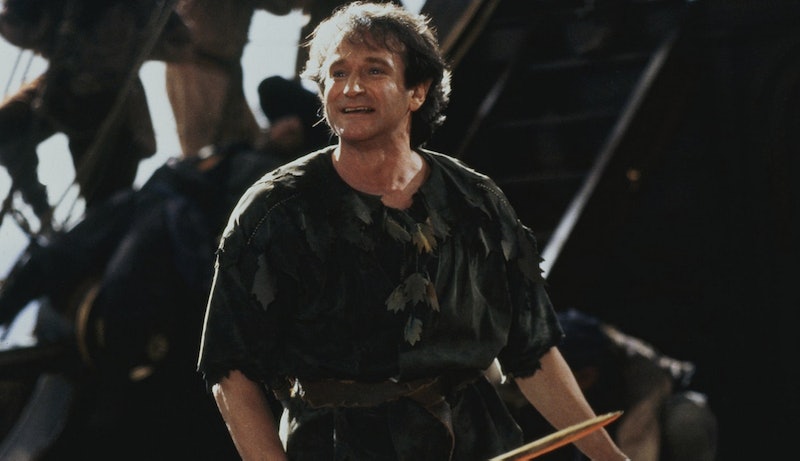 It's never easy to lose a beloved actor or actress, but the death of Robin Williams hits particularly hard. He not only made me laugh so hard I almost peed my pants (on an embarrassing number of occasions), he was also the guiding force through much of my childhood, pop culturally speaking. It's something that's true for legions of twentysomethings: From Hook to Jumanji to Good Will Hunting to Dead Poets Society, we live our lives in Robin Williams quotes and Williams-isms.

Whether he was hamming it up à la Patch Adams or delivering just the right amount of inspiration while talking to a genius who didn't quite know it yet, Williams was something of a filmic father figure for the pop culture–obsessed. We hung on his every word, and though he's passed away, his mark is so great, he's sure to enchant future generations. He's timeless, and on this sad occasion, there is no better tribute than to remember those iconic lines that made us laugh, cry, and wheeze (the man was a comedic tour de force, after all).

I'm fairly certain this speech will be referenced for centuries to come. There's not a man or woman alive who couldn't be roused to seize the day after listening to Williams' intoxicating speech.

"You're a... You're a complex Freudian hallucination having something to do with my mother, and I don't know why you have wings, but you have very lovely legs and you're a very nice tiny person, and what am I saying, I don't know who my mother was. I'm an orphan and I've never taken drugs because I missed the sixties, I was an accountant." –Peter in Hook

Because what the hell is a fairy like Tinkerbell anyway? Williams always made the confusing parts of life eloquently more complex.

"Goooooooood morning, Vietnam! It's 0600 hours. What does the "O" stand for? O my God, it's early!" –Adrian in Good Morning, Vietnam

I could add basically everything Williams said in this movie, but the classic line is inescapably memorable.

What more could you want? Genie dared to dream. Genie could put it all in perspective. Genie understood the power of a well-placed chickpea joke.

“Our job is improving the quality of life, not just delaying death.” –Patch Adams in Patch Adams

Say what you will about Patch Adams, but that quote alone gets me every time.

"You don't know about real loss because it only occurs when you've loved something more than you love yourself. I doubt you've ever dared to love anybody that much.” –Sean Maguire in Good Will Hunting

That. Line. It just cuts you to the core.

“You have to break in half to love somebody.” –Chris Nielsen in What Dreams May Come

There's something about the way Williams delivers this incredibly true line that gives it more gravity than it already carries.

"Oh, Gradual school is where you go to school and you gradually find out you don't want to go to school anymore." –T.S. Garp in The World According to Garp

You know, for the rebel in all of us.

Only Williams could turn one ubiquitous word into such an unforgettable greeting.