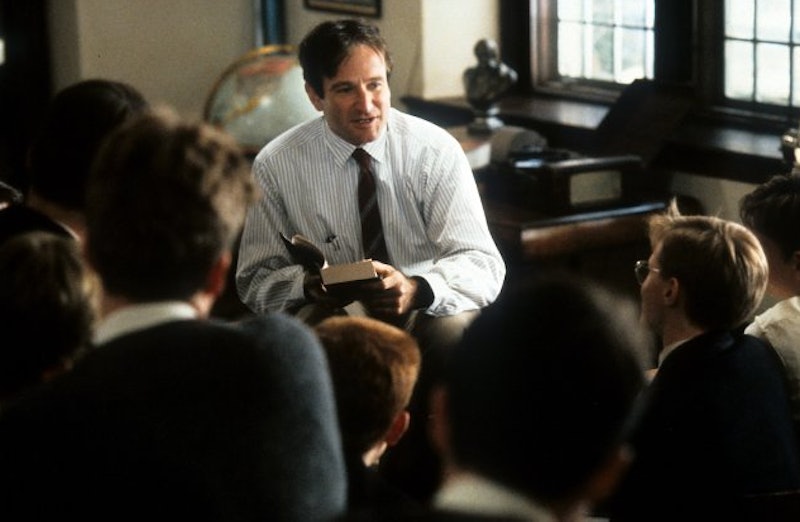 On Monday evening, scrolling through Twitter like any other day, my stomach dropped when I saw the news that Robin Williams died. It's news that would be shocking to anyone. Of course, the news is most tragic for those close to Williams — his friends, wife, and three children — but the shock that I felt is something that I'm sure everyone experienced upon hearing about his death. Robin Williams is just one of those actors who everyone is familiar with. His extremely long resume, which spans decades and starts as far back at the '70s, has something for everyone. There are television shows like Mork and Mindy, animated films like Aladdin, dramas like Good Will Hunting (a film which earned Williams an Oscar for Best Supporting Actor), and the list goes on. We've all seen at least one Robin Williams film, but the one that will stick with me the most is Dead Poets Society.

I watched Dead Poets Society several times throughout school. It was the go-to film for English teachers who either didn't have anything planned or wanted to surprise everyone with a movie day. But every time it came on, I appreciated it. It's not like I went to a strict private school like the one in the movie, or that I was particularly into poetry, but the anti-establishment message is something that pretty much every teen can get behind. Add in the fact that the students in the film and their teacher, John Keating (Williams) were rebelling by being into poetry (rather than, you know, skipping school or throwing wild parties), and this film had the perfect message to show in a classroom. A win-win for students and teachers.

Sure, it was kind of corny how the boys would called Keating "O Captain! My Captain!" But when he instructed them to rip out pages of their books, that was totally kickass and made me wish my teacher would have my class do the same with our massive World Literature textbooks. It didn't happen, but like I said, we weren't in a school with an uptight headmaster during the 1950s.

I'll always remember Dead Poets Society, and in particular Robin Williams' role in it, not just as that movie every teacher ever had available on VHS, but as a movie with that was inspiring in how it challenged young people to see outside of the traditional way of learning. As Keating says, "No matter what anybody tells you, words and ideas can change the world." And that's a message that definitely stuck with me.