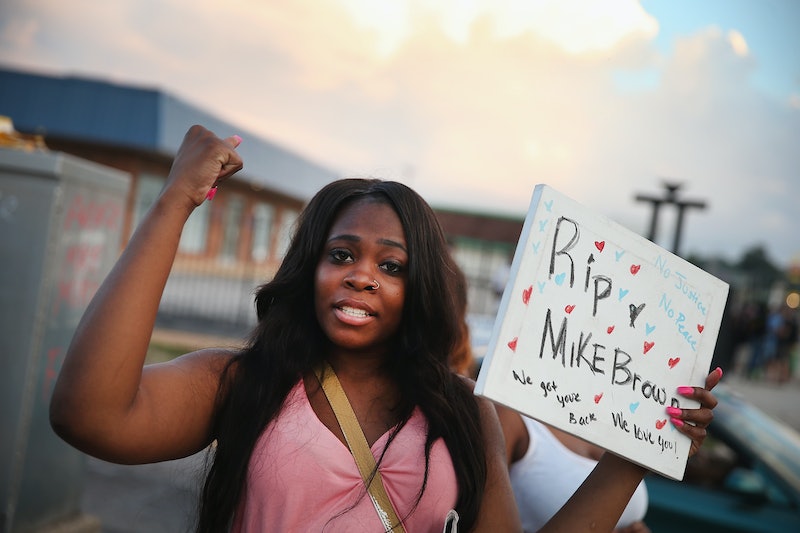 It started with a hashtag. Writer, social worker and activist Feminista Jones suggested a national moment of silence for Mike Brown and victims of police brutality to her Twitter followers on Monday night. The idea — as seen through this Storify collection — took off, and the #NMOS14 hashtag was born. Now, people in cities from New Brunswick, New Jersey, to Lansing, Michigan, will gather Thursday, Aug. 14, to honor Brown and silently protest excessive police force.

Mike Brown was an 18-year-old resident of Ferguson, Missouri, a working-class suburb of St. Louis. He had just graduated high school, and was ready to begin college classes this week. On Saturday, Brown was allegedly shot and killed by a police officer. According to The New York Times, authorities allege Brown — who was unarmed at the time — was killed during a struggle for a police officer's gun.

The community of Ferguson, however, is skeptical of this explanation, and protests continue in the predominantly African-American suburb this week. Police have reportedly used tear gas and other riot tactics on the community members, who are still reeling from the death of another unarmed, young black man.

As groups such as the NCAAP press authorities to open an investigation into the shooting, grassroots organizers across the United States are hurrying to plan Thursday's peaceful vigils in yet another example of positive "hashtag activism."

“I put out a call for us to gather in each city across the U.S. for a peaceful vigil in the way of the killing of Mike Brown in Ferguson, Eric Garner in New York City, and countless others who have [died from] police brutality around the country,” Jones told Philly.com.

So far, more than 30 National Moment of Silence events are scheduled for Thursday evening. Many of them will take place in major cities like New York, Los Angeles, Chicago and Philadelphia, as well as smaller cities such as West Palm Beach, Florida, and Decatur, Georgia. Each city has its own Facebook event, which can be found on the main #NMOS14 Facebook page.

According to the Facebook group #NMOS14, the vigils will take place at 7 p.m. Eastern Time (4 p.m. Pacific Standard Time), and the moment of silence will begin at the 20-minute mark. Many organizers are encouraging community members to bring signs, but to leave the bullhorns at home — reiterating the protest's intent as a collective healing.

From the Oakland organizers:

If you can, bring posters with the names of the fatal victims of police shootings and brutality. No bullhorns or violent messages. Feel free to bring candles for the vigil. This is a peaceful event in memory of the victims.

To find a National Moment of Silence in your city, visit the main Facebook page or search the #NMOS14 hashtag on Twitter to find local organizers.