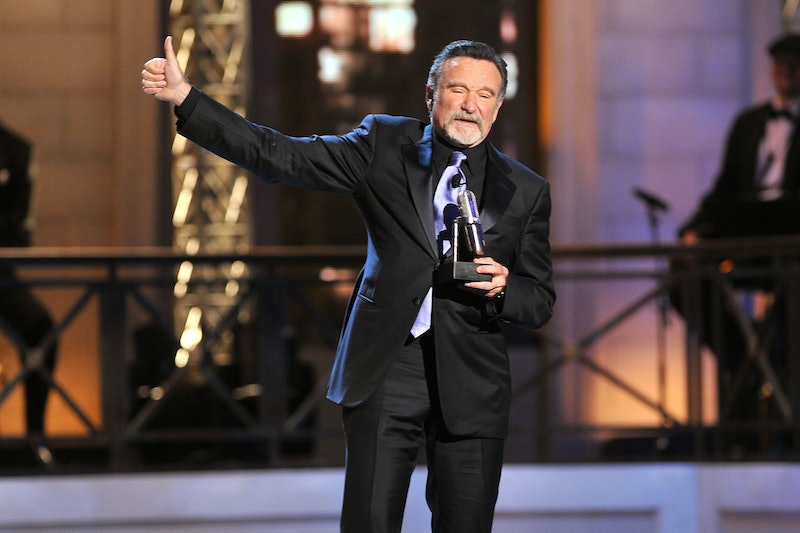 After news of his tragic death broke Monday evening, the world went into mourning for actor Robin Williams. It has been reported that Williams died of suicide and that he was found on Monday morning in his Tiburon, Calif. home. Williams touched many people — more than most actors can ever dream to — with his extensive career, and at the time of his death, he was still working on adding even more roles to his resume. One film in particular that was highly anticipated was the sequel to 1993's Mrs. Doubtfire. While it's hard to think about the production of a movie at a time like this, that is what the filmmakers are faced with. And according to sources, it sounds like Mrs. Doubtfire 2 will not continue without Robin Williams.

As Variety reports, "Sources say that though no decision has been made on the future of the project, written by David Berenbaum, it most likely won’t go ahead after the actor was found dead Monday."

To not continue without Williams is exactly the right decision, so hopefully the production company will stick with it. Mrs. Doubtfire, the character and the film, is Robin Williams. Making a sequel to such a well-known and loved movie 20 years after its release is questionable in the first place, and the idea of doing it without its main character who really made the movie come alive would just be plain nonsensical. Additionally, the film had not even started shooting yet, so to make the film without Williams would mean either going with a completely different story or casting someone else in the lead role, both of which seem extremely unlikely. No one wants to see a Mrs. Doubtfire that doesn't have Williams.

The film was set to be directed by Chris Columbus who helmed the original film as well. In a statement, Columbus said,

His performances were unlike anything any of us had ever seen, they came from some spiritual and otherworldly place. He truly was one of the few people who deserved the title of 'genius.' We were friends for 21 years. Our children grew up together, he inspired us to spend our lives in San Francisco and I loved him like a brother. The world was a better place with Robin in it. And his beautiful legacy will live on forever.

If, somehow, the film does go on without Williams, judging by that statement, it would be going on without Columbus as well.

In addition to Mrs. Doubtfire 2, Williams was also working on three other movies: Merry Friggin' Christmas, Night at the Museum: Secret of the Tomb, and Absolutely Anything, all of which are in post-production.