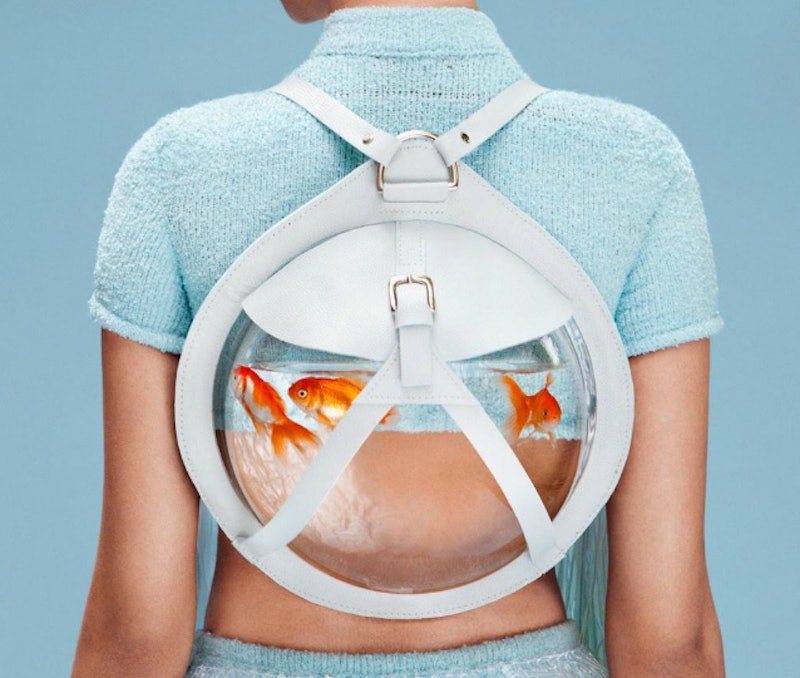 My childhood goldfish lived for eight years. EIGHT. That little guy was an overfed trooper, dutifully swimming his way up to the top of the tank to pant (or whatever fish do) his/her way through a few food flakes, then let his belly pull him to the bottom to hang out with the rocks for the rest of the day. A thrill of a pet if there ever was one, but I loved that orange, scaly dude and would have been more than happy to carry him/her to school with me every day — which is a thing I could theoretically do now. According to HintMag, London designer Cassandra Verity Green created a fishbowl backpack for her first collection, so you can actually tote your aquatic friends around on the daily.

This seems...heavy. And useless, obviously, since any notebooks you stick inside with the fishies would be instantly ruined. But dang, it sure does look cool! Just as cool as those toilets that are also aquariums, which I plan to fill my mansion with as soon as I make my millions. Be still my seapunk heart.

Sadly, as Ashley Hoffman of Styleite pointed out, you probably won't get fish living as long as mine did if they reside in your backpack. The lack of oxygen and small quarters are likely to lead to the early demise of your goldfish.

If you just can't resist the idea of lugging around a couple pounds of water and fish on your back, you can score the Bubble Rucksack for a little over £200 at notjustalabel.com. Plus, you could always fill it with other stuff — like a bunch of sour gummy worms or your entire daily quota of iced coffee.

Images: Not Just A Label