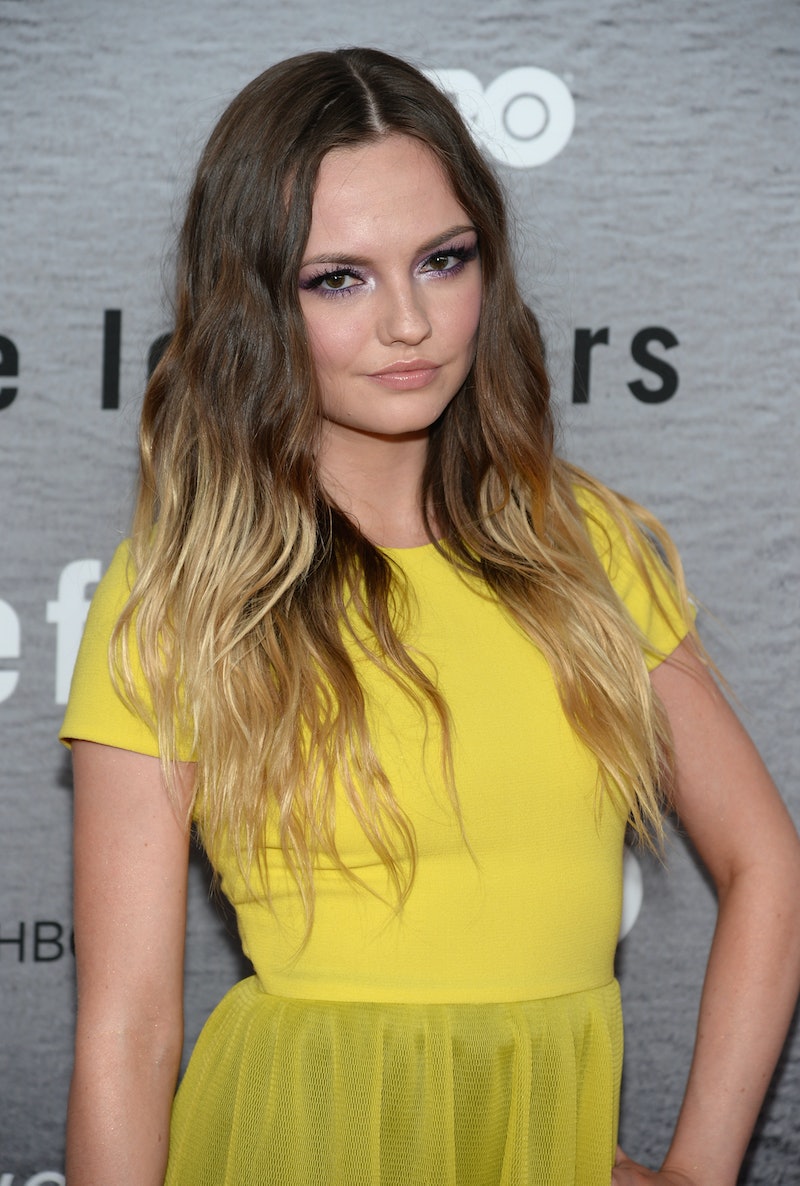 It's not been easy to follow Damon Lindelof's The Leftovers. Partially because the series' writers keep much of the characters' motivations and even actual occurrences off screen and partially because while the series came from Tom Perrotta's book The Leftovers, it's not following the page exactly. On Sunday's episode, another mystery moment went down between Chief Kevin Garvey and his daughter's teenage friend Aimee (Emily Meade). While we're never told what Kevin actually said to Aimee, the actress spoke to Bustle and helped us gain some insight into the nature of the interaction.

In "Solace for Tired Feet," Kevin's blackouts return and for the most part the main consequence (and certainly the loudest consequence) is a wild dog tied up in the backyard. "He's gonna rehabilitate it," Aimee informs Jill (and the rest of us). The other consequence is all Aimee. She speaks to Jill the way a mother might, referring to Kevin as "your dad" and nestling into the familiarity she and Kevin apparently came to share during his episode.

"I do think she takes on sort of the mother-wife role in her own mind, in the family," says Meade. "But also ... depending on her relationship with men, it's obviously sort of abnormal for a teenager." Part of her maternal instinct comes from Jill's need to be mothered, and as Meade puts it, "It’s like [Aimee's] way of being able to deal with [being without her mother] is mothering Jill in the way that she didn’t get to be mothered." But then there's other side of the mother-wife role. And that's where it gets tricky.

As we've seen, there's a subtle, yet undeniable sexual tension that's been pulsating between Kevin and his teenage houseguest since Episode 1. This episode, of course, is where it comes to a head. At one point, when she steals a moment alone with him, Aimee asks Kevin if he remembers what he said to her when she was bandaging his hand — a moment that we can only imagine heightened the latent, uncomfortable sexual tension between the pair. He simply changes the subject and leaves us all begging to find out what was said.

Meade isn't so bold as to ruin Lindelof's secret by divulging the exact details of the exchange, but she says that Lindelof told her what was said and so she gave us a little something to think about: "Obviously, we don’t know exactly how that plays out. But she’s not going to relate to a grown man in the same way that all other 17-year-olds would relate to a grown man."

While Aimee is very clearly a teenager, there's something about her that's always seemed older, unlike her same-aged best friend. When we spied her acting on her spin-the-bottle command at the raucous party in the first episode, it contrasted greatly with Jill's girlish weeping in her own semi-sexual situation. Aimee, due greatly to her circumstances, is somehow older, making it all the more likely that she attempts to fill that wifely role in the Garvey house.

And though we never actually get Aimee's official backstory on the show, fans of Perrotta's novel may remember that Aimee losing her mother in The Departure and her desire to flee her stepfather's more than inappropriate behavior landed her in the Garveys' house. While the writers may yet change Aimee's past (just look at Nora Durst, who was in no way related to Reverend Jamison in the novel), the book could give us a sense of understanding of why Aimee is the way she is. At least for the time being.

If we bring the book into the discussion, it's all there: fierce independence, a murky past of potentially sexual abuse from a father figure, the need to mother herself. While we won't find out immediately what exactly was said in Kevin's tender moment with Aimee, we almost don't need to hear the exact words. The act itself, the brief flicker of inappropriate familiarity almost stands on its own.