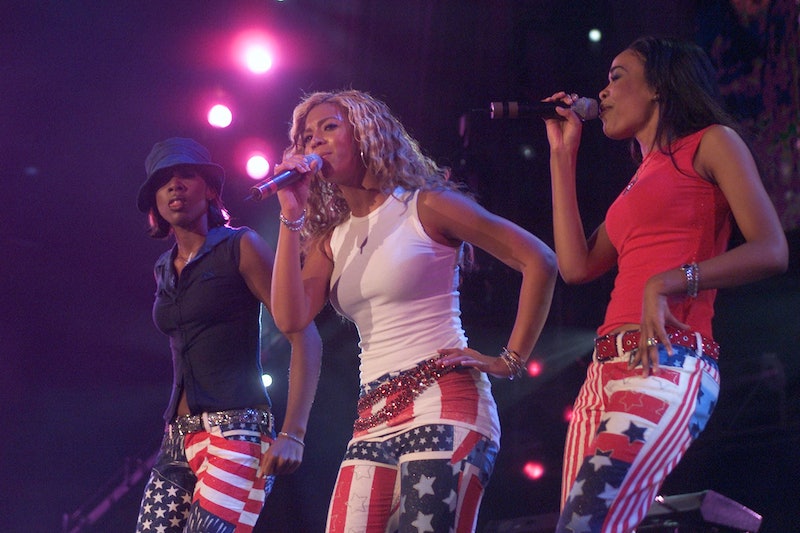 At some point after a breakup, I think we all reach the "fuck you" stage — it just happens at different times for different people. Sometimes it comes almost immediately, just moments after turning and walking away for the last time or sending that final, biting text (no emojis). Other times, it comes after weeks and weeks of laying on the couch in ill-fitting sweat pants, drinking Moscato and eating Cheetos crumbs out of the folds of your stained t-shirt. Whenever it arrives, the "fuck you" stage after a breakup can be, well, exhilarating.

All those times you farted and thought I didn't know — fuck you! You eat at Arby's — fuck you! Your sister looks like a troll doll — fuck you! YOU WERE ALWAYS MISQUOTING THE OFFICE AND I NEVER SAID ANYTHING UNTIL NOW — DOUBLE EXTRA FUCK YOU!!

This is your official "fuck you" breakup anthem playlist, featuring songs from the early '00s, because, let's face it, that was a special time in popular music: *N SYNC was still a thing, American Idol still mattered, and Destiny's Child was absolutely everywhere. So, sit back, relax, and get ready to tell your ex...

Breakup-iest Lyrics: "It ain't no lie/ I wanna see you out that door/ Baby, bye, bye, bye!"

Breakup-iest Lyrics: "Guess I couldn't trust/ Called your bluff/ Time is up/ 'Cause I've had enough..."

Sugababes — "Hole in the Head"

A little empowerment from across the pond.

Breakup-iest Lyrics: "Erased your number from my telephone/ And if you call me, I won't be at home..."

Few groups can make you feel as good about yourself as the legendary Destiny's Child.

Breakup-iest Lyrics: "Only ring your cell-y when I'm feelin' lonely/ When it's all over, please get up and leave..."

Breakup-iest Lyrics: "He's out there holdin' on to someone/ I'm holdin' up my smokin' gun..."

A surprisingly unforgettable song from this one-hit wonder.

Breakup-iest Lyrics: "Get your hands on his cash/ And spend it to the last dime/ For all the hard times..."

Breakup-iest Lyrics: "Hush, just stop/ There's nothing you can do or say, baby/ I've had enough/ I'm not your property as from today, baby..."

Kelly Clarkson — "Since U Been Gone"

You were just waiting for this song to make an appearance, weren't you? It's so epic.

Breakup-iest Lyrics: "Since you been gone/ I can breathe for the first time/ I'm so movin' on, yeah, yeah!"

The chorus is iconic.

Justin Timberlake — "Cry Me a River"

This song is so cold...but I love it.

Breakup-iest Lyrics: "Your bridges were burned/ And now it's your turn/ To cry, cry me a river..."

I was obsessed with this song when I was in the 7th grade because...well, because.

Breakup-iest Lyrics: "Did you know I made him leave?/ Did you know he begged to stay with me?/ He wasn't man enough for me..."

As always, Pink is committed to telling it like it is.

Eden's Crush — "Get Over Yourself"

Breakup-iest Lyrics: "Get over yourself, goodbye/ It must be hard to be you, yeah, livin' in your life..."

Carrie Underwood — "Before He Cheats"

This isn't just a breakup anthem, it's a revenge anthem.

Breakup-iest Lyrics: "Maybe next time he'll think before he cheats..."