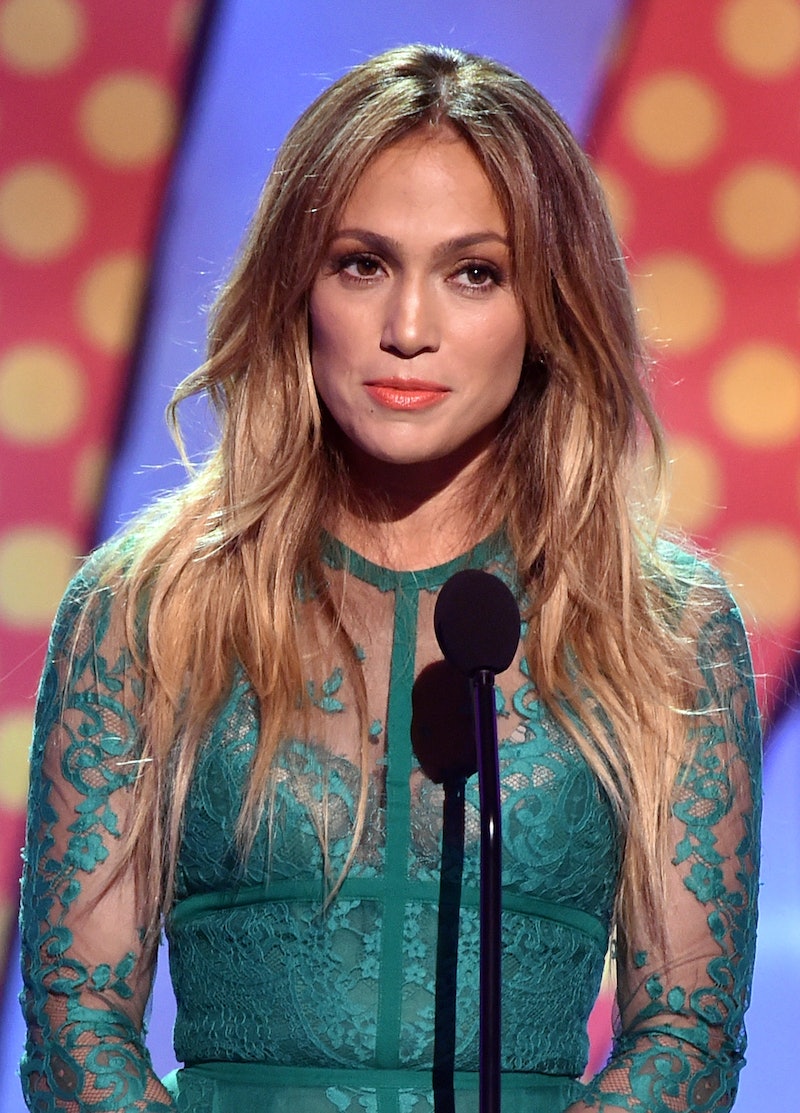 Don't be fooled by the age that she got— J. Lo turned 45 in July of this year and Wednesday she debuted the album cover for her forthcoming record, Jennifer Lopez's Booty, on her Instagram, and it's a not so gentle reminder to bow down to one of the greats. Sure, Nicki Minaj's Anaconda has everyone gasping for breath, but let's face it, we can't talk about butts without talking about J. Lo.

Do I sound crass? I don't mean to be—seriously, her new album is called Booty. She named it after her most notorious asset. And yet, J. Lo isn't asking you to objectify her; she's just smizing in that black and white leotard and high ponytail reminding everyone that she's in control of what she's got, which is an amazing body and an amazing career. It's a brazen cover, yeah, but it's no big leap from the contained control that J. Lo has had over her sexuality throughout her entire career. No matter how much Jennifer Lopez has amped up the sex appeal in the past (and it's certainly reached unattainable heights at times), she was always the one who made you look but never dared to touch. That kind of power is damn impressive for any pop star, but especially a pop star of color. And the proof is in the booty shots, and more.

The cover of her newest album, Booty will make you do a triple take. Like, damn, the woman is 45 going on 25. And the best part? J. Lo's Instagram caption that accompanied the pic: #bootybootybootybootybootyeverywhere #naturalbooty #jlobooty #bootyandthebeat #bootyfromtheblock #lol." Hashtag LOL? Come on, that kind of hashtag is practically a hairflip in e-speak. J. Lo knows what she's got going on and her sense of pride and sense of humor about her amazing shape are genius and outright—she knows people are looking, because she's making them look.

The movie that made J. Lo a star, especially her abs. Not only was it a loving tribute to the late, real Selena, but J. Lo turned the role into her own and did those bustiers justice.

Yeah, you know the one. The backless, frontless, sheer wisp of emerald chiffon that bore everything at the 2000 Grammys (when J. Lo's date was Sean Puffy Combs, my how time has passed), that has stood the test of time and lives on as a cultural artifact. It made J. Lo and Versace forever connected and it showed everyone that this is a woman that knows how to make you stop in your tracks. If she wants you to talk about her, you will. And let it be noted that she has barely aged a day since this, WTF?

If you've ever seen a Jennifer Lopez music video you know that the girl doesn't play. I was scandalized by the "Waiting for Tonight" music video and also mesmerized by a vision of a bronze J. Lo gettin' life from those green lasers. In almost all of her music videos, J. Lo is extremely, overtly sexy but that's the point: she can dance, she has an incredible body, why not show it off? She never seems like she's the subject of someone else's gaze; she's making you look at her (and seriously, where else could you look?) She's cultivated an unbelievable sense of presence.

It's safe to say that with the release of Booty, J. Lo is continuing her tradition of being a sex symbol that's totally in control of the way the world looks at her, and that's no feat to scoff at. She's gained and held onto power by shaping her image, and with every #booty, she keeps that control.