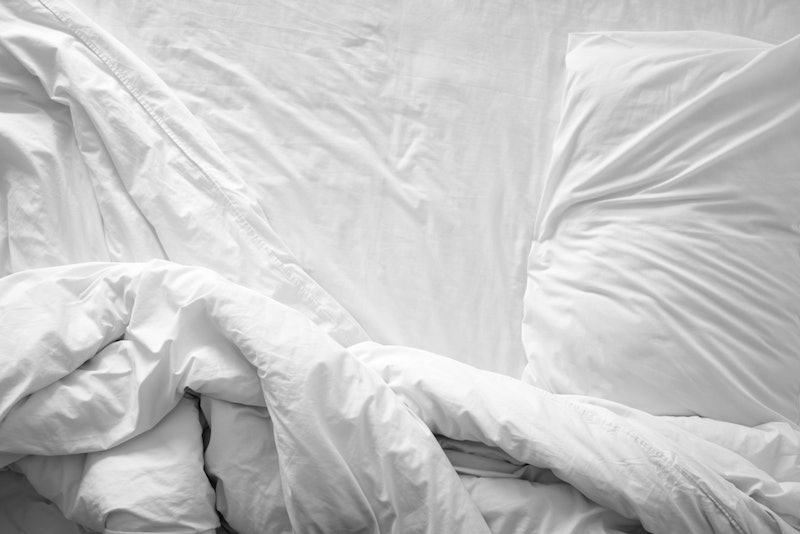 Ah, sex. Whether you’re into kinky, wild sex involving toys and new positions or you’re satisfied with chill, post-work, stress-relieving sex, intimacy with your significant other or even just a casual fling is fun, pleasurable, and exciting. Yet despite some of your best efforts, it’s not always easy to get in the mood, especially if you find yourself following the same routine every time you hit the sheets. It's time to turn on your speakers and put on these love making songs to put you in the mood.

Sometimes what you need — aside from scented candles and sexy lingerie (sorry, mom and dad) — is a soundtrack. At times it can be difficult to focus on the task at hand when all you can think about is the awkward silence before doing the dirty deed, whether or not your roommate can hear you, or if you remembered to turn off the oven. So with a little bit of music you’ll be able to take your mind off everything but the person you're with and get a little crazy. After all, what’s better than experimenting a little during sex?

So without further ado, here is a love making playlist that will definitely help you get laid tonight.

This Marvin Gaye classic is definitely the best song to put you in the mood, and if you don't know how to get things started, at least the chorus will make your intentions known to your partner. The smooth tune also makes for a great way to prank your sibling by playing it really loudly when he or she is about to get it on with his or her SO. Not that I would know from experience. #smh

While far from the dirtiest song in Prince's deep catalog, "Purple Rain" may be one of the best songs to put on when you're hoping to get in the mood before the magic has started. It's a classic makeout song, and what better way to ease into sex than to start with a sensual kiss?

This group didn’t hide anything in the hilarious and at times naughty music video to this song, but there’s nothing wrong with that. Embrace the fact that you’re getting laid tonight with this rock romp .

The song that officially signaled Britney Spears had embraced her sexuality and grown into a mature woman was "I'm A Slave 4 U." While it's definitely a throwback, it's an undeniably sexy one. If your man isn’t into this, then you can tell him to leave.

This song is so sexy, it even became a meme. But all fun aside, the funky bass line and Donald Glover's falsetto make this track from his funk and soul-heavy album Awaken, My Love! a bona fide jam to turn on when you're finally alone with that special someone.

"Earned It" — The Weeknd

Although I wouldn’t typically recommend attempting to do the Dirty Dancing lift associated with this song, Ryan Gosling’s go-to move in Crazy, Stupid, Love drove women crazy. And I’m not just talking about Emma Stone.

Speaking of hot men, Timberlake pretty much says it all in this song with, “Better have you naked by the end of this song.” Plus, who doesn’t like a good song by the former *NSYNC singer?

Though Stacie’s performance of this song didn’t win the riff-off in Pitch Perfect, it wins the “this-will-get-me-laid” contest for sure. Also, points given for being extremely clear about what's going down when you put this song on. Anna Kendrick would be proud of you.

Aside from the fact that this song is essentially one of the world's sexiest power couples flaunting their tipsy love in front of everyone, Beyoncé and JAY Z's "Drunk In Love" also gets points for the proliferation of the term "surfbort." Don't know what it is? Ask your partner to try the position with you!

This slow jam is all about the celebration of pleasure, particularly from oral sex. "What are you willing to do?" is a good challenge to give to your partner. We all could learn a thing or two about kissing it better, after all.

There's a reason this song is so iconic. Channing Tatum dances to it in Magic Mike, and if you or your partner (or both of you!) are ready to show off your moves in the bedroom, this is absolutely the song to put on.

Not only is this video hot (after all, it is Queen Bey — when is she not?), but the lyrics are also on point. Beyonce knows how to reach out to her listeners. Oui, j’aime le sexe.

I’m not going to say that all sex songs are classy, because this one definitely isn’t, but "Cherry Pie" will make you feel crazy and carefree. Most sex isn’t all Fifty Shades of Grey — and that's probably a good thing — but not all of it is completely innocent, either. Sometimes you just gotta let your freak flag fly.

Birthday sex, everyday sex… who’s really keeping track? Getting laid should be a celebration in and of itself. Listen to this song and have birthday sex year-round!

There's a time and a place for fast-paced songs when you're enjoying sexd with your SO, but sometimes it’s nice to take it down a notch with a slow song like this one. Remember: passionate sex is good sex, and this is definitely a sweet and passionate song.

Usher is the king of slow jams, and there's no better slow jam than "U Got It Bad." The best part is that this song is sexy, but genuinely romantic, too. Put this one on when you're sending some special time with someone you're really serious about.

If your partner needs some motivation to get down, Normani's joyous new single will get you both there. And if anyone is ambitious enough to do that basketball trick in bed... all the better.

This post was updated to include recent releases on September 9, 2019.

This article was originally published on Aug. 19, 2014