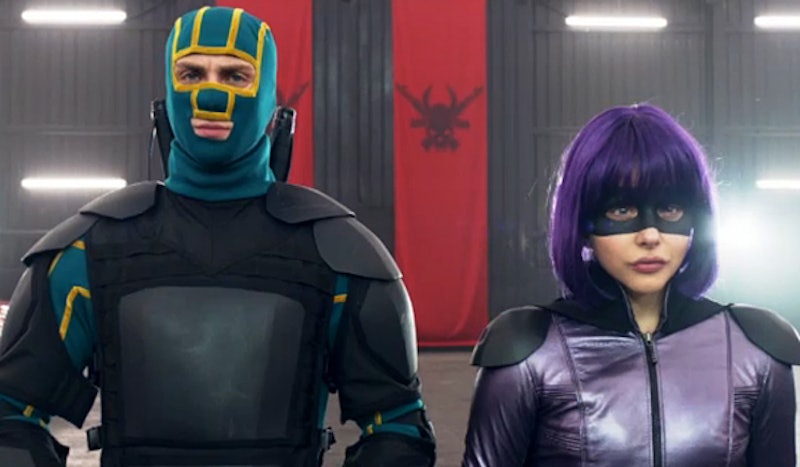 About 30 seconds into the trailer for Kick-Ass 2, the upcoming sequel to the 2010 superhero action comedy, Hit Girl (Chloe Grace Moretz), addresses the moaning boy she just kicked into submission. "Oh, take your tampon out, Dave," she says, walking away. In the PG-rated TV version of the trailer, the line is altered. There, Hit Girl tells Dave to "take his skirt off" while he's writhing on the floor. In both trailers, Hit Girl is shown to be smart, tough, and capable, an important feminist character. So why is she resorting to insulting her male enemies by calling them girls?

It's hardly a new idea that Hollywood has a problem with feminism, yet Kick-Ass and its sequel are two of the few movies of recent years that feature complex, three-dimensional heroines. Hit Girl is physically tough, but she's not a caricature of "strong female character." She's a realistic teenager, as complicated as any of the movie's males. Her young age makes her an especially feminist character; teenage girls are often made one-dimensional in film, pigeonholed into being either quiet and insecure (She's All That) or single-minded and oblivious (Election). Hit Girl, however, falls refreshingly between these lines. And so it's incredibly disappointing to see that despite this, she tells her male enemies to "take their tampons out" or "take their skirts off," implying that their weakness and complaining are "female" traits.

In doing so, Kick-Ass 2 reinforces the stereotype that women aren't capable of the same badassery as men. All of Hit Girl's feminist moments in the movie — and there are many — are irrelevant if she celebrates them by comparing the villain's weaknesses to being female. Beyond this just being obviously hypocritical, it's detrimental to women, especially the film's young viewers. The movie may be rated R, but the teens and tweens that will undoubtedly watch anyway will get to hear the main female lead imply that it's an insult to be her own gender. What kind of message is that?

Female-hating jokes like Hit Girl's prove that while Hollywood has increasingly become more accepting of female protagonists, they're still uncomfortable with having a heroine who's confident in her femininity. If Hit Girl was truly a feminist character, she wouldn't have to resort to anti-female insults in order to gain laughs from the audience. It's a cheap trick, but unfortunately, it's a reliable one.

Like most action comedies, the Kick-Ass series has a primarily male audience, and they respond well to male humor. Lines like "take your tampon out" reassure them, the men and boys in the theater, that Kick-Ass 2 may have a girl protagonist, but it's not a movie for girls. The tactic is insulting, frustrating, and unnecessary.

Boys can enjoy Kick-Ass 2 without needing to be reminded that they're its target audience. Girls can enjoy it without having to see the female star diss her femininity. Kick-Ass is a smart, enjoyable series that's capable of doing well with critics and at the box office without resorting to anti-feminist lines. There's absolutely no need for statements like those, and they take away from the movie's overall feminism. If the Kick-Ass movies really wants to be seen as progressive in terms of gender equality, getting rid of lines like "take your skirt off" would be a good place to start.

More like this
Sandra Bullock, Girlboss Extraordinaire
By Matt Harkins & Viviana Olen
The 'Thor: Love and Thunder' Trailer Finally Shows Christian Bale As Villain Gorr
By Grace Wehniainen
Sadly, 'Fantastic Beasts: The Secrets Of Dumbledore' Isn’t Streaming — Yet
By Arya Roshanian
Laura Dern Said “Cultural Awareness” Made Her Rethink This 'Jurassic Park' Fact
By Grace Wehniainen
Get Even More From Bustle — Sign Up For The Newsletter