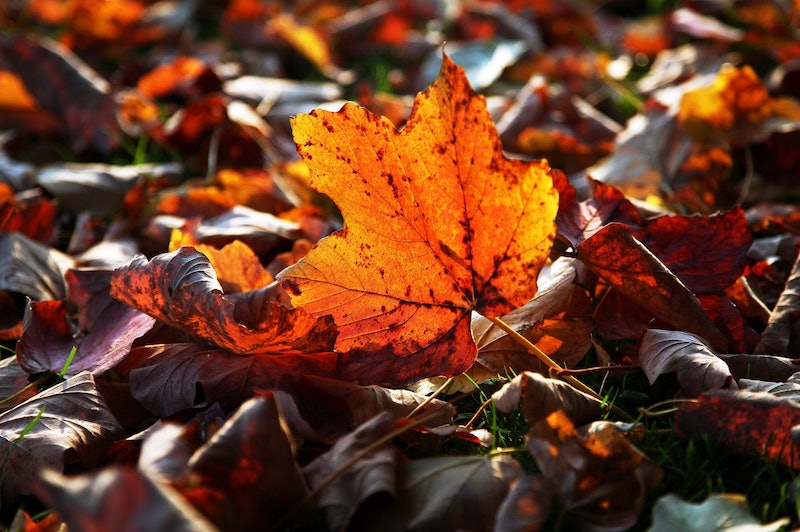 If you’ve ever enrolled in a lit class, whether at the 6th grade or the undergraduate level, chances are you’ve been schooled in the virtues of imagery. And what virtues it has — it's the driving force behind literary wonders such as Wordsworth’s belt of cheery daffodils and Steinbeck’s verdant Salinas Valley, among others. Imagery is what gilds the leaves with dew, and blankets the fields with dawn mist. Lovely, right? Right.

With the turn of the season just around the corner (insane!), I culled some of the most beautiful images of autumn to usher us in. If we're going to say goodbye to summer, might as well bring in fall in the prettiest way possible, no? And there are so many shimmering descriptions by writers; I mean, what better subject about which to wax poetic through imagery than autumn, she the jewel-toned season responsible for sending writers everywhere scurrying to their color wheels and thesauruses for le mot juste?

You're reaching for your sweaters already, I just know it.

“At no other time (than autumn) does the earth let itself be inhaled in one smell, the ripe earth; in a smell that is in no way inferior to the smell of the sea, bitter where it borders on taste, and more honeysweet where you feel it touching the first sounds. Containing depth within itself, darkness, something of the grave almost.”

“Her pleasure in the walk must arise from the exercise and the day, from the view of the last smiles of the year upon the tawny leaves and withered hedges, and from repeating to herself some few of the thousand poetical descriptions extant of autumn — that season of peculiar and inexhaustible influence on the mind of taste and tenderness — that season which has drawn from every poet worthy of being read some attempt at description, or some lines of feeling.”

“The Sussex lanes were very lovely in the autumn. I started going for long lone country walks among the spendthrift gold and glory of the year-end, giving myself up to the earth-scents and the sky-winds and all the magic of the countryside which is ordained for the healing of the soul.”

“It was October again ... a glorious October, all red and gold, with mellow mornings when the valleys were filled with delicate mists as if the spirit of autumn had poured them in for the sun to drain — amethyst, pearl, silver, rose, and smoke-blue. The dews were so heavy that the fields glistened like cloth of silver and there were such heaps of rustling leaves in the hollows of many-stemmed woods to run crisply through.”

“The ripe, the golden month has come again, and in Virginia the chinkapins are falling. Frost sharps the middle music of the seasons, and all things living on the earth turn home again ... the fields are cut, the granaries are full, the bins are loaded to the brim with fatness, and from the cider-press the rich brown oozings of the York Imperials run. The bee bores to the belly of the grape, the fly gets old and fat and blue, he buzzes loud, crawls slow, creeps heavily to death on sill and ceiling, the sun goes down in blood and pollen across the bronzed and mown fields of the old October.”

“There was a filmy veil of soft dull mist obscuring, but not hiding, all objects, giving them a lilac hue, for the sun had not yet fully set; a robin was singing ... The leaves were more gorgeous than ever; the first touch of frost would lay them all low to the ground. Already one or two kept constantly floating down, amber and golden in the low slanting sun-rays.”

“In the entire circle of the year there are no days so delightful as those of a fine October, when the trees are bare to the mild heavens, and the red leaves bestrew the road, and you can feel the breath of winter, morning and evening — no days so calm, so tenderly solemn, and with such a reverent meekness in the air."

“Don't you love New York in the fall? It makes me want to buy school supplies. I would send you a bouquet of newly sharpened pencils if I knew your name and address.”

“After the keen still days of September, the October sun filled the world with mellow warmth... The maple tree in front of the doorstep burned like a gigantic red torch. The oaks along the roadway glowed yellow and bronze. The fields stretched like a carpet of jewels, emerald and topaz and garnet. Everywhere she walked the color shouted and sang around her ... In October any wonderful unexpected thing might be possible.”

“Squeeze your eyes closed, as tight as you can, and think of all your favorite autumns, crisp and perfect, all bound up together like a stack of cards. That is what it is like, the awful, wonderful brightness of Fairy colors. Try to smell the hard, pale wood sending up sharp, green smoke into the afternoon. To feel the mellow, golden sun on your skin, more gentle and cozier and more golden than even the light of your favorite reading nook at the close of the day.”

“That old September feeling, left over from school days, of summer passing, vacation nearly done, obligations gathering, books and football in the air ... Another fall, another turned page: there was something of jubilee in that annual autumnal beginning, as if last year's mistakes had been wiped clean by summer.”

“Fall: bright flame before winter’s deadness; harvest; orange, gold, amber; cool nights and the smell of fire. Our tree-lined streets are set ablaze, our kitchens filled with the smells of nostalgia: apples bubbling into sauce, roasting squash, cinnamon, nutmeg, cider, warmth itself. The leaves as they spark into wild color just before they die are the world’s oldest performance art, and everything we see is celebrating one last violently hued hurrah before the black and white and silence of winter. Fall is begging for us to dance and sing and write with just the same drama and blaze.”

“Is not this a true autumn day? Just the still melancholy that I love — that makes life and nature harmonise. The birds are consulting about their migrations, the trees are putting on the hectic or the pallid hues of decay, and begin to strew the ground, that one's very footsteps may not disturb the repose of earth and air, while they give us a scent that is a perfect anodyne to the restless spirit. Delicious autumn! My very soul is wedded to it, and if I were a bird I would fly about the earth seeking the successive autumns."

More like this
Prince Harry Incorrectly Recites Christina Aguilera’s “Genie In A Bottle” Lyrics
By Jake Viswanath
I Read Prince Harry's 'Spare' So You Don’t Have To: 11 Highlights To Know
By Marina Watts
7 Bicep Curl Variations That'll Spice Up Arm Day
By Carolyn Steber
25 Inspiring Quotes From Black Women To Celebrate Black History Month
By Kyli Rodriguez-Cayro and JR Thorpe
Get Even More From Bustle — Sign Up For The Newsletter
From hair trends to relationship advice, our daily newsletter has everything you need to sound like a person who’s on TikTok, even if you aren’t.