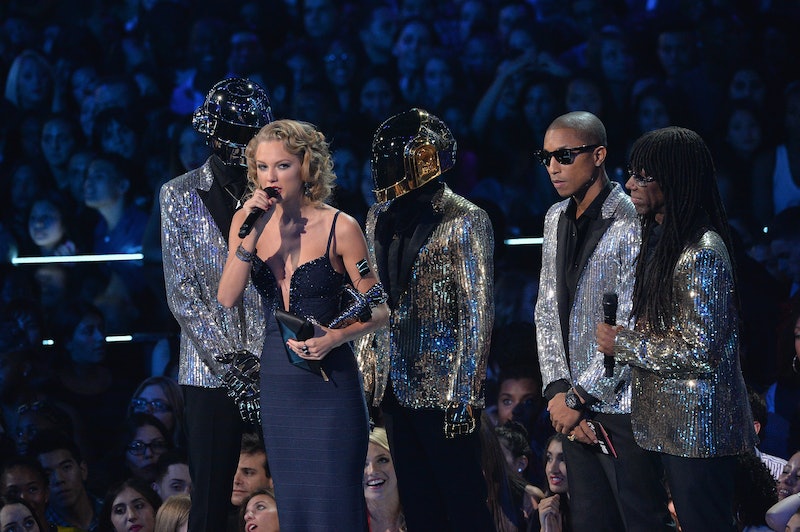 Taylor Swift has been going to the MTV Video Music Awards since she was 18 — not many people can say that. Then again, Taylor Swift is no ordinary person. She's been a fixture at the ceremony ever since she made her debut in 2008. On Aug. 24, Taylor Swift will attend the VMAs for the seventh time, and will perform... something. Details about her performance (and her rumored new album) have been kept tightly under wraps, in spite of Jimmy Fallon's friendly teasing, but odds are it'll be memorable. How do I know this? Because Taylor Swift has quite the VMA track record — both on stage and off.

There are the obvious great Taylor Swift VMA moments we can recall. After all, she was involved in the best impromptu onstage scuffle ever televised. (While I'm sure you know what incident I'm referring to, there's more on that later.) But, for the most part, Swift has been quietly ruling the VMAs since she started out. Every year she's attended has been marked by at least one moment that solidifies Swift as equal parts superstar and awkward young adult. In honor of her seventh time down MTV's red carpet, let's check out her best VMA moments.

Way back in 2007, Swift released a little single called "Teardrops on My Guitar," which would inspire heartbroken teens across the globe and make MTV take a second look at the budding superstar. The video earned Swift a Best New Artist nomination. While the award would go to Tokio Hotel that year (remember them?), Swift had quite the night, co-hosting the VMA Pre-Show and stepping out with Joe Jonas for the first time as a couple.

For her second time around the block, Swift arrived in style (2009)

By 2009, Swift was a force to be reckoned with. As such, she arrived to the 2009 VMA's in style. To compliment her glamorous sequined dress, Swift arrived in a carriage — as a true queen does.

While Swift dazzled in a performance that involved New York City public transport, her winning streak was... interrupted. While accepting her first-ever moon man for Best Female Video, the microphone was unceremoniously taken from her by none other than Kanye West. West just wanted to take the opportunity to share who he thought deserved the award that year. (Spoiler: not Swift.)

Swift was quite the champ after The Incident. The next year, she took the stage to perform some new music. While fans were divided about the new single, "Innocent," it showed a triumphant return for Swift — despite the lack of footwear.

The beginning of "Never Ever Getting Back Together" (2012)

Swift wasn't nominated for any awards in 2012, but she was just setting up for the success that would inevitably come from her fourth studio album, Red. She performed "Never Ever Getting Back Together" for the first time at the 2012 VMA's. It's weird to think that song came out two years ago, and it still comes up on Pandora top hit playlists every once in a while.

An offbeat moment between Swift and Selena Gomez during One Direction's acceptance speech was caught by MTV's cameras and left for the Internet to devour. See, at that point, Swift and One Direction's resident heartbreaker Harry Styles had briefly dated and split. Presumably, she was making a snarky comment to her friend about an ex — hey, we've all been there. However, we are not all glamorous pop stars being recorded at all times. While Swift and Styles' mutual friend Ed Sheeran dismissed the situation as a bad lip-reading, we'll always have Gomez' awkward head lift to make us believe otherwise.

Swift took home the Best Female Video moon man in 2013 for "I Knew Your Were Trouble," which she has insinuated is about Styles. So, when handing out thank you's for her award, Swift called out her subject: "I want to thank the person that inspired this song, he knows who he is! And now I've got one of these."

Three makes a trend! Swift revealed on The Tonight Show that she will, indeed, be performing at the VMAs, but nothing else. Seeing as she's used the show to debut new music twice before, what's to stop her?