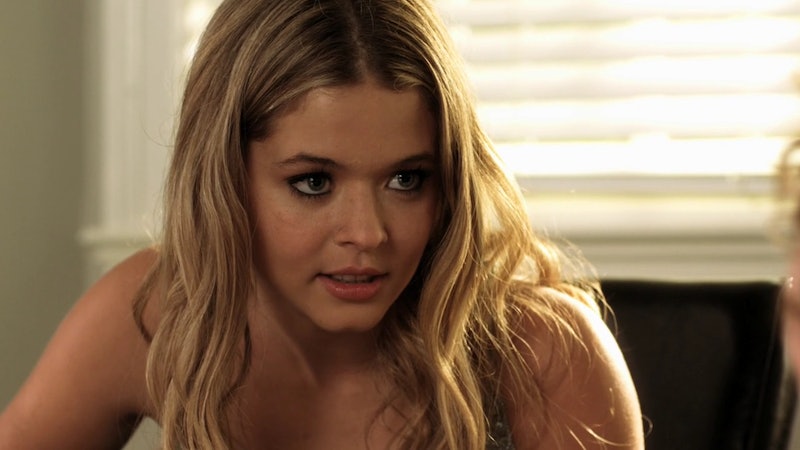 I'll be honest: this summer season of Pretty Little Liars hasn't exactly been the most thrilling. While I'm all for the writers introducing new story lines into the show as to not have every single episode be about searching for the identity of A (let's face it, four seasons of that would've been a total dud) I really couldn't care less about Detective Wilden's murder or the death of Toby's mom (sorry, Tobes).

So, imagine my surprise when Tuesday night's episode not only brought us reeling back into Ali-Land, but also might have answered a question that's been plaguing Pretty Little Liars viewers since the show's pilot. (Yes, I take this show a bit too seriously.) Get ready, non-book readers, because spoilers are headed your way.

Did Alison have a twin? And is one of them alive?

In the Sara Shepard novels, Alison's identical twin sister, Courtney, is introduced — and it explains a ton of the mysteries within the books. But in a shocking twist, it turns out that the girl introduced to the Liars as "Courtney" is really Alison — and that Courtney was the girl who was murdered ... BY ALISON. Pretty craycray, right? (You see why these books have been my summer guilty pleasure).

But, while the show has gone in a completely different direction — many characters remain the same, but their stories are totally different — many fans have questioned whether Ali would end up having an evil twin (or, you know, a normal twin, since Ali always seemed pretty evil to me). Why? Well, there have been about a million clues indicating that Ali could have a twin, including this picture posted on Twitter by executive producer I. Marlene King. Ali having a twin would explain a ton — all those hallucinations of Ali could be the real Ali reaching out, and her twin could be the one who died. Or, if Ali was the one who died, her twin could be back to taunt her sister's former friends. While Ali having a twin wouldn't neatly wrap up every mystery, it would certainly make some sense.

All that said, it seems that the twin theory was shattered last night. Though producer Oliver Goldstick stated that Season 4 wouldn't explore the theory, we already may have our answer to whether Ali has a twin. And the answer? Umm, no, she probably doesn't.

She still has a doppelgänger ... and that doppelgänger is Cece Drake, an older, potentially more wicked version of Alison DiLaurentis, with the same amazing hair and conniving smirk. In last night's episode we learned that Cece totally had it out for the Liars, which she conveniently kept secret. Why? Well, apparently Alison pretended to be Cece and shoved a girl down the stairs at a frat party, causing Cece to get expelled from UPenn. Cece thought all the girls were in on the "prank". Getting expelled from your Ivy League college over something you didn't even do? Well, that's enough to make anyone murder someone and then create an anonymous fake identity in order to torture all of her friends, right?

What makes Cece a stand-in for the twin theory? Well, for one, last night's flashback indicated that Mrs. DiLaurentis was fed-up with Alison and Cece pulling the "ole' switcheroo"... especially when it came to pretending to be on suicide watch in a mental institution. (This show is basically a very dark Mary-Kate and Ashley movie). According to Mrs. D, the girls did more than just wear one another's clothes — they wore one another's personalities. Umm, scary.

Ali may not have an actual twin, but Cece Drake could definitely fill the same type of role in the story. Could she be Red Coat? Or A? Or is Cece Drake simply another red-herring for the Liars to chase?

Either way, we may have finally put at least one Pretty Little Liars theory to rest.