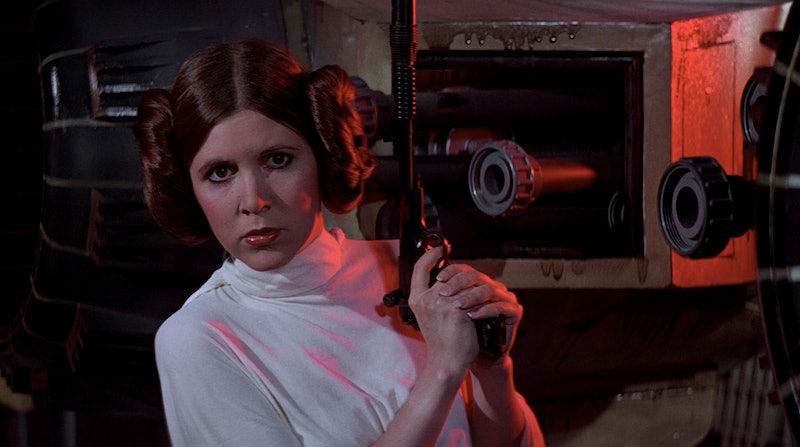 The other day, I happened upon the most awesome shirt I have ever seen: a black, sleeveless shirt with every character from the classic Star Wars film The Empire Strikes Back epically depicted in an array of brilliant colors. (It even included Bossk. Yes, I know how awesome that sounds.) I bought it without even checking the price, stoked beyond all get-out that I'd just found something that's both on trend and fitting of a longtime Star Wars fan. It was the best of both worlds.

I wore my new shirt proudly that night, pairing it with my favorite Zooey-Deschanel-in-New-Girl-approved blue skirt, a blue and gold statement necklace, and my favorite flats. Upon arriving to my chosen social activity for the night, a friendly acquaintance of mine looked at my shirt with a puzzled face before finally reaching eureka. "Oh! Dudes are gonna love you tonight," she said knowingly while gesturing to my new favorite top. I smiled, but in my head, all I could think was how insulted I was over the notion that I bought this awesome, incredible find just to get the attention of some sweaty dudes at a Brooklyn bar.

Hell no. That shirt is for me. Because believe it or not, I'm a girl who cares about fashion, yoga, and other basic bitch staples and I'm big ol' nerd. Haters to the left, because it's the truth: I fucking love Star Wars.

And with this feather-ruffling incident fresh on my mind, I thought there'd be no better time to defend my fellow ladies who love that galaxy far, far away:

"Girls who like Star Wars are usually so weird, but you're so normal!"

"How can you get so into it? Star Wars is just so cheesy."

Oh really? Is the existential crisis that cripples a young man when he learns his father is the enemy he's been fighting all along cheesy? Is the film that jumpstarted the world of visual effects in film cheesy? Is a tiny, green creature who speaks in life-changing riddles cheesy? (OK that last one is kind of cheesy, if not for the fact that Yoda is the spiritual guru we all need in our lives. "Do or do not. There is no try" may be the greatest piece of advice ever spoken on film.)

"Are you really watching Star Wars right now? You are such a nerd."

Hell yes, I am spending my Saturday afternoon watching the classic, beloved, epic, incredible film The Empire Strikes Back. You know, the one Roger Ebert called "thought-provoking," praising the film's story for being "as deep and universal as storytelling itself." Yeah, that one. Yes, it's old. Yes, I've seen it a thousand times. But the entire point of being a fan is to love the movies, not remember that one time I watched them when I was 5 years old. You don't have to understand it. Just respect it, or talk to Boba Fett's emphatic finger up there.

"Star Wars is basically like Babylon 5 and Star Trek right?"

So these things are sci-fi and deal with space. That doesn't mean they're identical. But if it makes you feel better, sure. They're the same thing. Just like Breaking Bad and Weekend at Bernie's are the same because they both deal with figuring out where to put dead bodies.

"Oh, you probably had a boyfriend who really loved Star Wars."

No. I did not. What part of "I've been watching these movies since I could consciously remember watching movies" don't you understand?

"Yeah, but do you really love Star Wars?"

This is insulting on many levels, because it implies one of a few things.

A. That I have some ulterior motive for "pretending" to like this film franchise, often as a method of garnering the attention of dudes with similar interests. Which is utterly ludicrous. Change my interests to lure a man? Have you even seen a single Princess Leia scene? Homegirl taught me better than that.

B. That the person asking the question doubts my devotion and is likely already prepared to quiz me on some obscure fact about the films. And don't even think about pulling that "What species is Yoda in the movies?" trick question bullshit on me. I'm way ahead of you, pal.

"Did you get that Darth Vader shirt at Urban Outfitters?"

Nope. And even if I did, it's only because I was so ecstatic to find a shirt that matches my love of Sith lords and the need for clothes that fit my womanly shape appropriately. This is not an attention-grabbing ironic throwback. Deal with it.

"You probably love the Ewok part of Return of the Jedi."

To the non Star Wars fan, this seems pretty innocuous, but to a die-hard this is rude as hell. For one, Star Wars fans have long hated George Lucas' addition of cute, cuddly bears to the final chapter of his original trilogy — something any real fan would know. Secondly, it's like assuming that the only reason someone watches Game of Thrones is for the occasional glimpses of fluffy, cuddly direwolves. Look, I like cuddly things and I didn't hate the Ewoks, but let's get one thing straight: I'm here for the conclusion of the most epic space saga of all time. Not a country bear jamboree in the trees.

"Oh, well then you probably just like it for the Han and Leia romance."

Again, I don't sit around through about four and a half hours of collective screen time waiting for the few minutes of romance between Han and Leia. Same goes for the new trilogy (in fact, I'm inclined to fast forward through some of those overwrought Anakin and Padme scenes). While I will certainly attest to Han and Leia's stories being one of the greatest on-screen romances of all time, it's certainly not the only thing pulling me into the film series' orbit.

That being said, I will admit that Han Solo #cangetit.

Actually, I have. It is pretty spectacularly terrible. And the fact that anyone in their right mind would claim to love that as a measure of superfandom is someone whose approval I definitely don't need. GTFO.

"Your favorite characters are probably Leia and Padme."

Seriously? Didn't I cover this in the Ewok section? Were you even listening? Being a woman does not mean I only like cuddly things and pretty ladies in dresses and cute outfits. Besides, picking a favorite Star Wars character is like picking a favorite food: I've never been able to settle on one thing and instead choose to enjoy a 14-ounce porterhouse just as much as I do a plate of disco fries or a mountain of coffee ice cream with chocolate sprinkles. Looking at you, Vader, Boba Fett, and R2D2. And if, somehow, Leia and Padme were my top two favorites, I'd be doing pretty well. Those ladies are some badass bitches.

I'm sorry my awesome choice in movies has turned your world upside down, but if you'll excuse me, I'm going to keep living every day like it's that final scene in Return of the Jedi. May the force be with you, 'cause you're gonna need it.

More like this
The 'Hocus Pocus' Sequel Finally Has A Release Date & It Makes Total Sense
By Shannon Barbour and Radhika Menon
S Club 7’s Jon Lee Continues To Reach For The Stars
By Rachel Mantock
“The Door Is Always Open” For Another 'Breaking Bad' Spin-Off, Says AMC Boss
By El Hunt
Everything To Know About Obi-Wan Kenobi Season 2
By Kadin Burnett
Get Even More From Bustle — Sign Up For The Newsletter