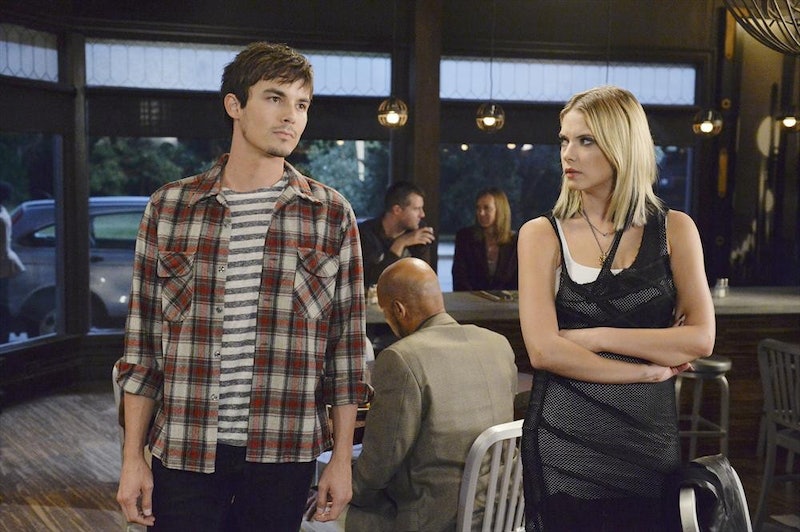 ABC Family's Pretty Little Liars spin-off Ravenswood had all of the makings for a great television show. Tyler Blackburn? Check. Ghosts? Check. Trendy coffee shop set in an old bank? Check. Tyler Blackburn? Double check. So when it was Caleb's life in Ravenswood was canceled, I, along with the fifteen other people who watched the short lived show, wept. Ravenswood left so many unanswered questions; most importantly, what kind of hair product was Remy using to get that crazy volume?

On paper, Ravenswood made perfect sense. I assume a bunch of writers were brainstorming, "Hey, could A be a ghost?" (because, come on. A couldn't be a ghost. Could he/she/it?) Then, another writer shouted to the packed room, "Caleb should get a spin-off! About ghosts!" Before anyone knew what was happening, they were laughing and popping champagne because they had the Next Big Thing on their hands. Put Caleb on a bus to Ravenswood, and leave him there. Also, make sure that there's some strange haunted back story about his relatives that hasn't been discussed until right now. Also, kill off one of the main characters in the first episode, so she can be a ghost for the remainder of the series. Also, skeletons.

I diligently watched Ravenswood, and I still can't tell you half of what was happening during the show. Caleb may or may not have died at one point. Plus, Hanna showed up on a few occasions, and her haircut did not follow any PLL continuity, which made everything more confusing because when was the show taking place? However, I digress.

When the unthinkable happened, and Ravenswood got the cut on Valentine's Day this past year, those same writers who were so excited about a Caleb-centric spin-off now had the difficult task of figuring out how to get him back to Rosewood. But, PLL had started making arrangements for Caleb to be MIA. Heck, Hanna even went and got herself a new boyfriend. So when Caleb hops off the bus at ROS, with his shattered dreams and cardigan, he was bound to be different. He had to come back a changed person because GHOSTS! I think. Right? It was confirmed that there were ghosts in Ravenswood? Real or not real?

The writers also needed to explain Caleb's Rosewood reappearance, while casually trying to hint at the events of Ravenswood. Honestly, Caleb has kind of been referring to Ravenwsood as if it were his Gas Leak year and we're supposed to accept that it happened, and move on. But clearly his time away has changed him gravely (oh gosh, sorry about that awful pun, I couldn't help it).

For starters, his beautiful flowing locks that made him look like the dreamiest skater boi are suddenly gone. It's the easiest way to show Caleb is dealing with some stuff and Hanna, you just wouldn't understand. His newly coiffed 'do is the result of a bad breakup/cancellation, and it kinda makes him look like a real life Flynn Rider or Cary Elws in The Princess Bride. Both are fine in my book.

Caleb's wardrobe has also taken a dramatic change, and a much darker one at that. While he has always worn muted tones, gone are his graphic t-shirts, flannel shirts, and hoodies. Instead, he's traded them in for grays and blacks, and a ripped fraying jacket that seems to suggest he saw something awful. Caleb, who hurt you?

While Caleb was always apt to cause trouble (remember when he used to be the girl's go-to guy for tech stuff? He hacked into so many phones for them!), now he's starting actual trouble, like punching Aria's mom Ella's ex-fiancé Zack. Zack was totally justified in getting punched in the face, and it's sweet of Caleb to stick up for Hanna's honor like that.

However, two seasons ago we never would have seen Caleb do something like that. Instead, he and Toby would have taken a road-trip together for about three episodes to "get to the bottom of something" and then reappear with answers about Zack's mysterious backstory. Caleb never would have rushed over there to punch someone out. Is this going to be his new thing? Then, will he justify his brash actions with whatever happened to him in Ravenswood?

Plus, Caleb shows up in Rosewood and immediately starts drinking. Come on, Caleb, you're better than knocking back a few beers and not going to school. I have no idea how Caleb will ever graduate on time as it is, considering he's bounced around schools more times than any school board should allow. All of this takes a toll on Hanna: she might have her boyfriend back, but it's causing her trouble, too. She falls into a downward spiral with him, and soon the two are living off of leftover junk food and takeout. Thankfully, at the end of this last episode, Hanna came to her sense and gutted their fridge, and forces Caleb out on a run. If there's anyone who can talk sense into him, it's Hanna.

This still doesn't explain the events of Ravenswood, and what ultimately led Caleb to this breaking point. Caleb's dealing with his own internal ghost-A demons, and clearly they've gotten to him. He left Ravenswood for a reason, and I don't think he can break any fourth wall and tell us it's because his spin off was canceled. He's got to be a little bit darker, and it's worrisome. Marlene King hinted to Zap2It that we might get to see some Ravenswood characters again, but maybe PLL should pump the breaks a little bit, and finish one story line before they open up fifteen others. They can save the loose ends of Ravenswood for PLL's eleventh and twelfth seasons.

Caleb, I love you no matter what you're going through, so please let me know if you need anything. I'm available for hugs whenever.

More like this
The 'PLL: Original Sin' Creators Say A’s Identity Will Be “Very Clear” By The Season Finale
By Alyssa Lapid
Every Horror Movie Reference In The 'PLL: Original Sin' Premiere
By Alyssa Lapid
Josh Peck Shows Love To Jennette McCurdy After Her Shocking 'iCarly' Revelations
By Radhika Menon
At 14, D'Arcy Carden Was Sneaking Out To Parties & Crying Over Kurt Cobain
By Ivana Rihter
Get Even More From Bustle — Sign Up For The Newsletter