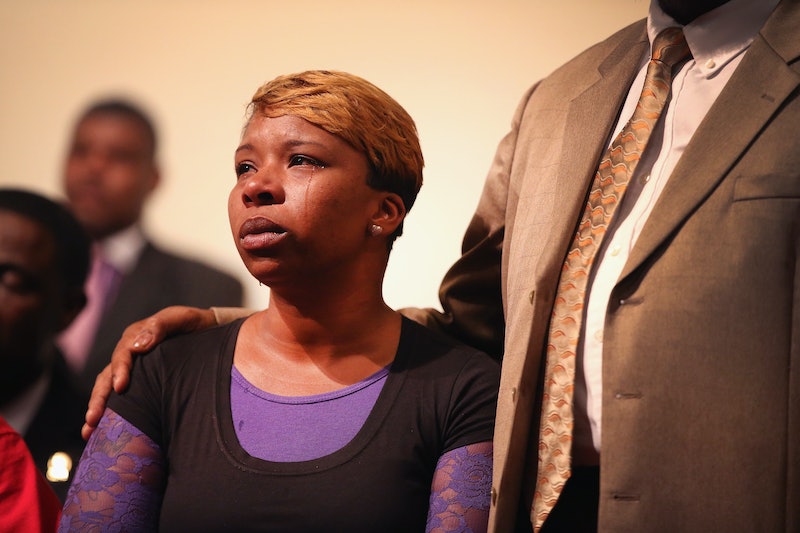 When Carla Sheffield took to the steps of the Boston Common at the National Moment of Silence for Michael Brown on Thursday, the crowd of 400 people fell silent. Earlier in the evening, the crowd had called out, one at a time, the name of an African-American killed by either law enforcement or a vigilante citizen. Eric Garner, Trayvon Martin, Oscar Grant, Danroy Henry Jr., Renisha McBride and Ezell Ford — who was just shot and killed by a Los Angeles police officer Monday night — were among those memorialized. But Sheffield had another person to add to that list: her son.

Burrell Ramsey-White was 26 years old when he was shot and killed by a Boston police officer in 2012, following a traffic stop that turned into a foot chase through the streets of Boston's South End neighborhood. An investigation into the incident found that the officer shot Ramsey-White in self-defense, after he reportedly pulled a firearm on the officer.

While holding a portrait of Ramsey-White, Sheffield picked up the communal bullhorn and addressed the crowd in the shadows of the Boston Statehouse, where she had worked for 11 years:

I’m here because my son was shot and killed on Aug. 21, 2012, by a Boston police officer. It was supposed to be a routine traffic stop. This officer has now been cleared of his wrong doing. But my thing is this: Just because you wear a blue suit doesn’t mean you don’t lie. ... I bust my ass. I work hard. I went to school, I got a master’s degree in criminal justice. And you still took my son. You still took my son.

When Sheffield tried to file for victim assistance, she was told she couldn't receive it because her son had committed a crime, leaving her with little money to pay for his burial.

Every time I go to a rally like this, what I hear is, “Oh, the officer’s from a nice family.” Well guess what, dammit — so was my son. My son doesn’t have a headstone. I shouldn’t have to bury my son when you all took him. You all need to set up a police fund for when you shoot and kill our kids.

After Sheffield stepped down, her husband took the bullhorn, raising his fist toward the Common. "We don't need to go to Ferguson," he said. "We have a Ferguson right here."

In the wake of Michael Brown's death, the stories of police brutality, racial profiling and systemic racism have gone far beyond Ferguson, Missouri. Every town, it seems, has their own Ferguson. And for women like Carla Sheffield, who lost their young African-American sons, the tragedy is ordinary.

"My heart goes out to Michael Brown’s family. I know they are hurting," Sabrina Fulton, the mother of Trayvon Martin, said in an email to The Washington Post. "My family and I continue to pray for them during their darkest hour of burying a child."

The grief of Fulton and Lesley McSpadden and hundreds of others has fueled many women's rights activists across the country over the last week, calling for the feminist movement to recognize the harassment, shootings and overall devaluing the lives of African-American men — and women — as a reproductive justice issue. Writes Dani McClain in The Nation:

But the killing of Michael Brown, like the killing of many young black people before him, is rarely framed as a feminist issue or as an issue of pressing importance to those who advocate for choice, self-determination and dignity as they relate to family life. With this most recent killing, I am wondering what it would take for more people in feminist and reproductive rights circles to begin to think of parents such as Lesley McSpadden, Sybrina Fulton and Angela Leisure ... as women they advocate for just as passionately and vigorously as they advocate for a young woman’s right to contraception or an overwhelmed mother of three’s right to an abortion.

Ferguson is more than police militarization, though that is certainly an integral issue. Ferguson affects women. It affects parents and grandparents. It affects families. And, from what the National Moment of Silence showed us, it affects communities, whether they're as small as Ferguson or as large as Boston, New York or Los Angeles.

Later in the evening on Thursday, after dozens of young African-Ameican men and women shared their testimonies, 29-year-old Corneillus Phillips inched his way to the top of the Boston Common steps. "I don’t normally do this," Phillips said, before continuing:

I have two kids. My eldest is six. My daughter is about to be two tomorrow. Danroy Henry is her cousin, and she’s never going to meet him. That's it.