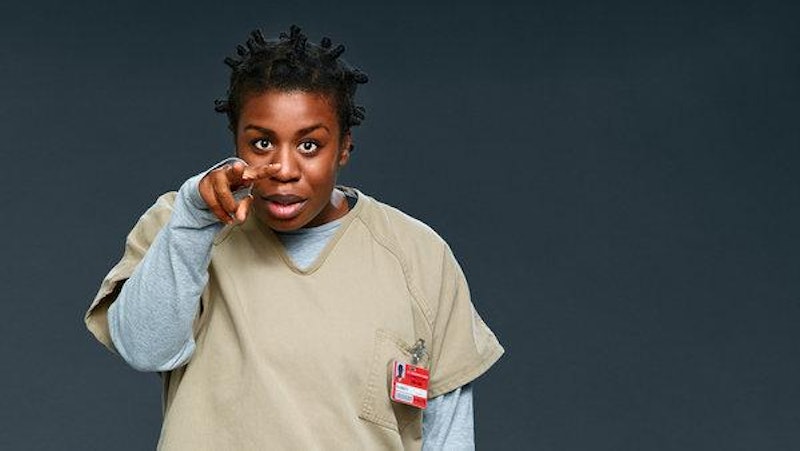 Say what you will about Uzo Aduba's Emmy nomination for Best Guest Actress for her work in Orange Is the New Black (and you should say: Guest actress? Really? The woman commands the entire show!), but it still led to great things for the actress. Because, on Saturday, Aduba won the Emmy for her guest role as "Crazy Eyes" at the Creative Arts Emmys. True, it might not have happened during the primetime Emmys (bad enough she's given the "guest" qualification, but we can't even see her accept her award live?), but it's still heart-warming, and revolutionary, to see the scene-stealer from the progressive Netflix series get recognition.

Taking the podium, Aduba toasted the series that made her a star, which was created by Weeds' Jenji Kohan: "I don’t know how to say how incredibly impressed I am to be a part of this show day in, day out," she said, also thanking Netflix for “putting something like this on television so that everyone can be represented in such a beautiful way.”

It certainly wasn't an easy statue to win. Though Aduba has cemented herself as one of Orange Is the New Black's most valuable players, she was also up against big names like Saturday Night Live nominees Tina Fey and Melissa McCarthy (who received nods for their hosting stings at Studio 8H), Shameless' Joan Cusack, and fellow Orange Is the New Black stars Laverne Cox and Natasha Lyonne.

But, really, we know what clinched the win for Aduba in the competitive category:

Well, and this dessert-related sacrifice for art:

Honestly, though, could any other win be as well-deserved? Time to re-binge-watch season one!