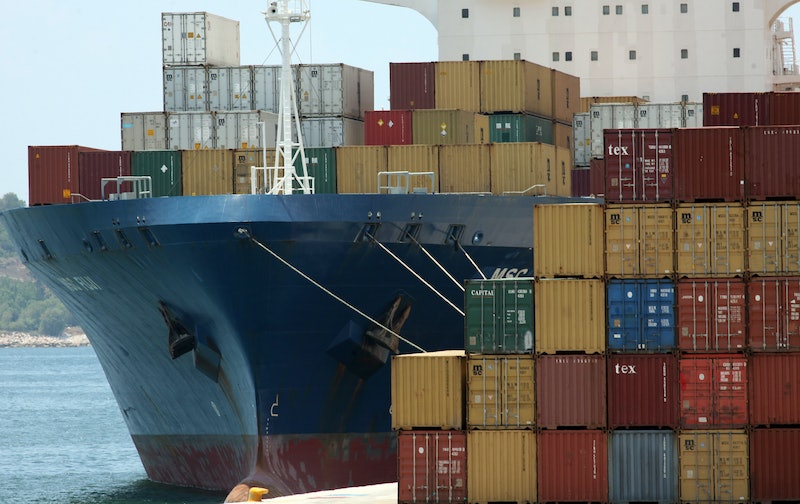 Police in the U.K. have launched a homicide investigation after a dead man was found among 35 people who were discovered in a shipping container at Tillbury Docks, Essex, on Saturday. The people in the container, who are now understood to be Sikhs from Afghanistan, are believed to be victims of human trafficking. It's unclear where the victims, including children, were loaded onto the ship on which they were found, but the freighter's last stop before Essex was in Zeebrugge, Belgium. The 34 survivors were all sent to local hospitals to be treated for dehydration and hypothermia, and all but four have since been discharged.

"Staff here at the port became aware of screaming and banging coming from a container coming from that particular ferry," said Essex police Superintendent Trevor Roe in a press conference. The victims are believed to have been trapped in the box for at least 12 hours overnight before they were discovered. Taking that into consideration, police can't confirm yet how the dead man was killed, though the death is currently being treated as a homicide. After the horrifying discovery, police continued to investigate the other 50 containers on the ship. At least there's some good news: In one of the few bright sides of this story, no other refugees were found.

Although police still haven't revealed their knowledge — if they have any — about where the box of people was loaded onto the ship, Belgian authorities feel certain that the victims were already in the container when it arrived in Europe. Police there are currently looking at security camera footage to get information on the shipping company that deposited the box in Zeebrugge, said a Belgian police spokesman. "In that area," he explained, citing tight security, "it is rather impossible to put 35 people in that container."

The discovery was such a major concern that a special casualty bureau has been set up for the 34 survivors. In addition to official help, the Sikh community in Essex has banded together in support of the surviving trafficking victims. Although they are now in the official care of Essex police, Roe revealed, it's the religious community that has been tending to the refugees' emotional needs. "We have had a good deal of help from partners within the local Sikh community in the Tilbury area to ensure that these poor people, who would have been through a horrific ordeal, are supported in terms of their religious and clothing needs."