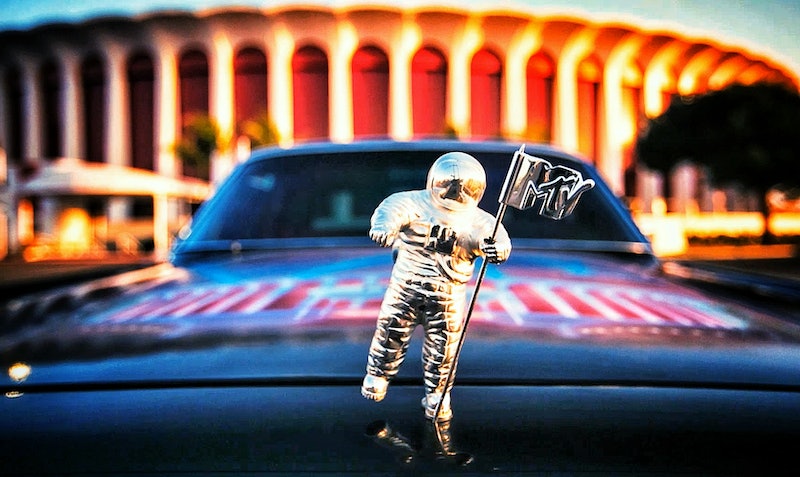 The Academy Awards have Oscar. The Emmys have a winged woman holding an atom. And MTV's Video Music Awards, aka the VMAs, have...a moonman. It is, in a word, unique. Astronauts have nothing to do with music, videos, or current celebrities, so why is the VMA statue a moonman?

It's actually a nod to the very first MTV broadcast. Fred Siebert, MTV's first creative director and creator of some of its most famous ads, wanted to launch the new cable network with a statement-making, iconic image. "We felt MTV was as big a TV event as ever happened; it was going to change TV that much," Siebert told Print magazine. "We had this idea of copying the biggest TV event in world history — the man walking on the moon — usurp it to ourselves, the juvenile delinquents of MTV."

So, when MTV made its first broadcast on August 1, 1981, that's exactly what people saw: The 1969 Apollo 11 moon landing. Only instead of Neil Armstrong's famous "one small step for man quote," a disembodied voice simply said: "Ladies and gentlemen, rock and roll." A kickin' guitar riff came in, and, instead of an American flag sticking out of the lunar surface, an astronaut planted a flag with the MTV logo. The fledgling network is born.

The VMA statue is an astronaut to pay homage to the first moment in MTV's history. The original moonman statue was created by Manhattan Design's Frank Olinsky, who created many of MTV's early logos. The moonman was based on Buzz Aldrin, who, according to the New York Times, gave his permission for his likeness to be used as the inspiration for the statue.

Personal aside: I snapped this photo in an excellent exhibition of music video memorabilia held at the Museum of the Moving Image in Queens, New York. (They also had sketches from A-Ha's "Take On Me" video.) It is for Peter Gabriel's "Sledgehammer," which is still one of the best music videos ever as far as I'm concerned.

That moonman statue was used from the very first VMAs up until last year, when a new moonman was designed by Brooklyn-based contemporary artist KAWS. It was a Brooklyn-themed VMAs all-around, since the ceremony took place in the borough's Barclays Center. This one definitely doesn't look like Buzz Aldrin. The space traveler doesn't even look human; it looks like a skull-and-crossbones with X's for eyes, or maybe an extraterrestrial being with stubby mouth tentacles like Cthulhu.

"It’s such a strong, iconic thing, everybody sees the moonman and knows right off the bat what it is," KAWS told MTV. "It seems very, very in line with the work I make; it seemed like a natural step.”

It looks like MTV has dropped the Brooklyn vibe for this year's VMAs. The ceremony is back in California, and it seems like they've gone back to the original moonman. But, while the KAWS statue is cool, it's better to have a statue with more of a direct connection to MTV's history, even if everyone watching is too young to remember it,

More like this
Everything To Know About Taylor Swift’s 10th Studio Album, 'Midnights'
By Grace Wehniainen and Jake Viswanath
The Spice Girls Just Dropped A Brand New Music Video
By Sam Ramsden
The Best 'Grey's Anatomy' Intern Moments, From MAGIC to Glasses
By Grace Wehniainen
A New Scooby-Doo Movie Confirmed Velma Is Gay & Twitter Is Pumped
By Radhika Menon
Get Even More From Bustle — Sign Up For The Newsletter