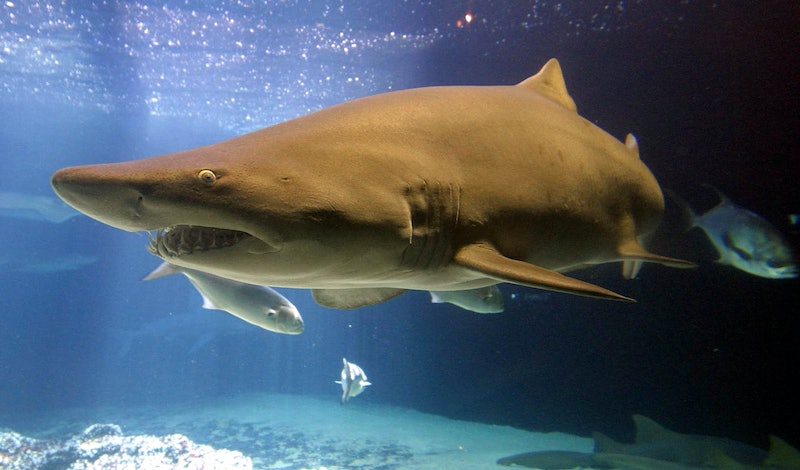 Sure, you might use your Internet to read Bustle articles and watch adorable cat videos, but can you have it for dinner? If you happen to be a great white shark, your answer is likely yes — seriously, great white sharks are attempting to eat the Internet, and now Google is coming to the rescue. And you thought you had to be in the water to suffer a shark attack.

For nearly 30 years, sharks have been feasting on Internet cables on the ocean floor that connect the world via the web. In 1987, the New York Times reported that four cable failures among the US, Europe, and Japan could be attributed to shark attacks, and in the 27 years since, it seems that number has only increased. At the very least, sharks certainly haven't tired of biting these cables, as relatively recent video evidence shows these ocean monsters attempting to chomp down on our Internet.

The reasons behind this Internet fetish is a bit murky, though there are a few prevailing theories. One of the most scientifically sound explanations is that the high voltage current that travels through these cables create electromagnetic fields in the water around them. Sharks coincidentally possess the superpower known as electroreception — the ability to detect these fields, also generated by fish — which they normally use to track and hunt their prey.

But as clever as sharks are, they cannot differentiate between the electromagnetic fields generated by fish and those generated by Internet cables, and being the indiscriminating, equal-eating-opportunity animals that they are, they attack everything generating these signals. Unfortunately for the Internet cables, this means that they sometimes fall victims to the hunger of a great white.

Of course, an alternate theory is simply that sharks are curious about their surroundings, and lacking the opposable thumbs and hands humans possess to feel things out, sharks simply take a more straightforward approach — biting.

But regardless of the reason behind the attacks, the consequences are quite costly. As the Times reported back in 1987, "a single bite...can cost $250,000 or more to fix." And that was in 1987 — imagine what the price tag would look like now. At the time, AT&T officials told the Times that they were "confident [that] wrapping the cable in double layers of steel tape" would prevent further damage. But unfortunately, they were wrong.

When sharks bite the cables, it allows the salt water of the sea to flood the power conductor, which causes the cables to fail. And while wrapping the cable in protective materials was the right idea, we've never quite gotten the material right to keep out the sharks.

But luckily for us humans, our corporate version of a great white, Google, is combatting the sharks to regain control of our Internet. Considering that Google laid claim to an astounding 40 percent of all the Internet's traffic last year, it certainly has reason to fight a turf war with the sharks.

Thanks to modern technology, Google is now surrounding 100,000 miles of its trans-Pacific fiber-optic Internet cables with a material very similar to kevlar — yes, the stuff bullet-proof vests are made of. At the Google Cloud Roadshow in Boston last week, Dan Belcher, a product manager said that the company was doing this in order to "prevent against shark attacks."

Well, it isn't exactly kevlar — as Google told Slate, the wrapping is more of a "special protective yarn and steel wire armor." In fact, to make sure that Google and only Google has the magic shark-proof material, they went ahead and patented what they are are calling Polyethylene protective yarn, which they've apparently had around since 2003. Whatever it is, it's meant to withstand even the hungriest shark's bites.

Google, which would likely send the world into a state of global chaos if it were to ever go down, certainly needs to keep all its cables up and running as perfectly as possible, and no great white shark will get in their way. Moreover, these new fiber-optic cables, which use lasers to shoot data through the ocean, are supposedly 100 times faster than the copper cables that are currently in use. So not only is Google saving your Internet, it's also making it faster.

If Google's kevlar solution works, it will save Internet users everywhere from virtual shark attacks, and let's face it — if Google can't fix it, nobody can.