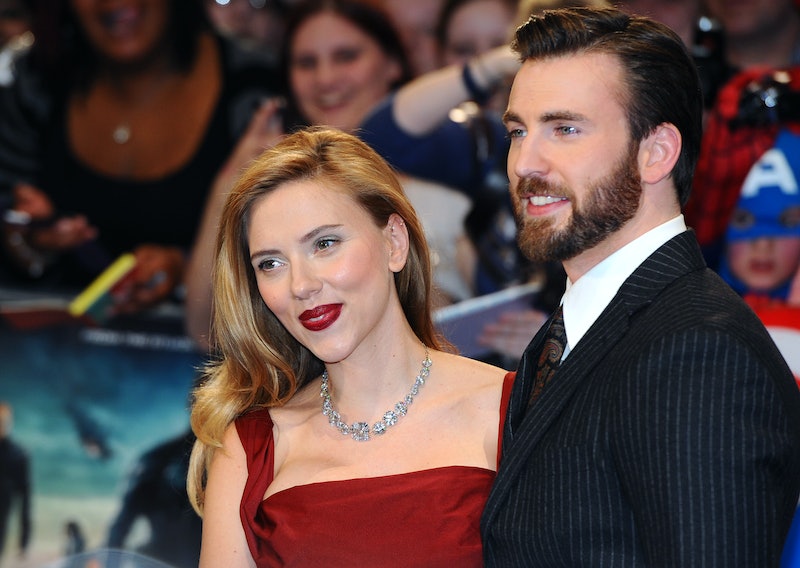 "Another day, another baby bump," is pretty much how it's starting to feel when I take a gander about the Internet. Seriously, is there something in the water? How is it that every single actress in all of Hollywood is pregnant? Today's baby bump belongs to Scarlett Johansson, who looked pretty darn pregnant when she went to get ice cream with her fiancé Romain Dauriac. (So to answer your question: Yes, today we will be discussing only the hardest hitting news). Johansson, like all working women, has a little more on her plate than just morning sickness and ankle swelling though — like filming an action movie. But it sounds like in Avengers: Age of Ultron, Scarlett Johansson's pregnancy is hidden with some pretty skillful tactics.

Perhaps, like me, your mind immediately went to Black Widow's super-tight costume and then asked, "How?" Or maybe you realized that we live in a world where David Fincher transplanted Armie Hammer's head onto somebody else's body instead of, you know, just casting twins, and figured that hiding a pregnancy was probably no big thing. And it wasn't, apparently. Avengers: Age of Ultron waits for no man (or baby), so Joss Whedon rounded up a bunch of women who bear a passing a resemblance to Johansson (aka the luckiest women in the world) to work around the actress' pregnancy.

But all the body doubles caused a little confusion on set, apparently. "You walk by, 'Hey, Scarlett — oh, weird. You're not Scarlett at all. Sorry.' A lot of fake Scarletts around," Chris Evans told Entertainment Weekly .

Of course, Evans could have avoided all that confusion if Avengers had taken their lead from the original masters of pregnancy concealment: television. Now, granted, TV shows have a much smaller budget than a big studio action flick. But less money usually leads to to great ingenuity — kind of like that time your microwave broke but you still really wanted ramen.

In that spirit, let's take a look at some of the more, shall we say, creative ways TV has addressed the age-old question of off-screen pregnancies.

We'll start with my personal favorite: coats, coats, coats. Apparently actor pregnancies plunge the television world into an endless winter because television wants nothing more than to simply layer a pregnancy away. How I Met Your Mother's Colbie Smulders and Scandal's Kerry Washington both layered it up to continue filming while pregnant. So basically, all Joss Whedon had to do was set Avengers in Antarctica, and the world would have been considerably less confusing for Chris Evans.

But unfortunately, characters occasionally have to come inside, even when the actresses playing them are pregnant. Luckily, television figured out a work-around long ago: just stick a chair in front of them! Olivia Pope apparently loved nothing more than standing behind a nice chair while Kerry Washinton was pregnant.

And this scene is basically a master class in pregnancy filming. Big coats, waist-up filming and a big ol' chair right in the middle of the shot! Bravo!

Sitcoms also have the option of playing a pregnancy for laughs, a bonus option How I Met Your Mother banked on when Colbie Smulders and AlYson Hannigan both got pregnant while filming. In Season 4's "The Possimpible," the writer's attributed Hannigan's extra weight to a hot dog eating contest Lily had entered. Soooo meta. Well played, guys.

But even if chairs, coats, and hot dogs had no place is the Whedonverse, Whedon could still have gone with the most classic of TV pregnancy standbys: just write the darn thing into the script. Sure, it might come across as lazy, but that didn't stop The Office from using that crutch both times Jenna Fisher got pregnant. And you know what, everyone was totally cool with it because of this:

Come to think of it, the only thing that Avengers was missing the first time around was an adorable moppet. And now, I can never forgive Whedon for taking baby Black Widow away from us when it was sitting right there. And just think of all that baby daddy drama! (The father has to be Hawkeye, right?)

Can we say "giant missed opportunity?"