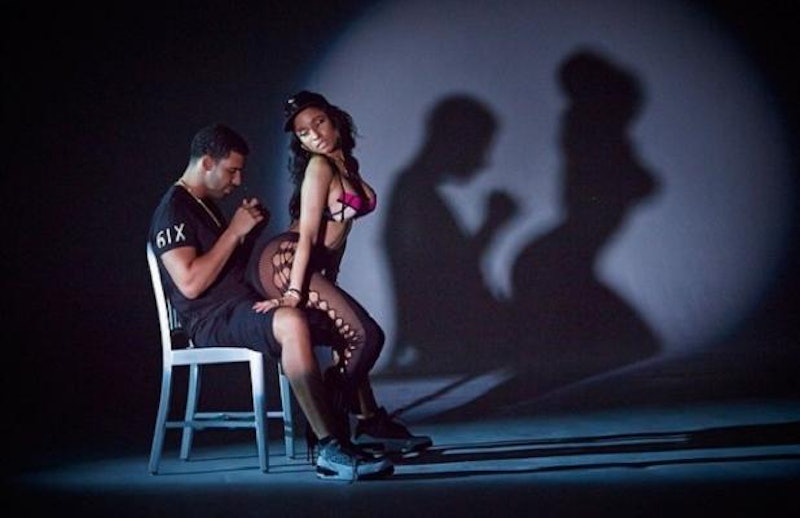 As the harbinger of the long-awaited "Anaconda" music video release Wednesday, Nicki Minaj has released a quartet of teaser photos on Instagram. Although many online ranters have already deemed the photos "racy" or "steamy," I'm not so sure. Of course, the Anaconda album cover has proven, once and for all, that thongs can match sports bras, but I'm not sure these images have as much inherent sex appeal as fans have proclaimed. Perhaps it's platonic partially-clothed touching, okay?

Obviously, all of our "Anaconda" questions will be answered once Nicki releases the music video for the this colubrine single, including the inquiries about its name. Then perhaps fans will be able to calm down about her makeunder, and maybe, just maybe they'll stop shaving her visage into their buzz cuts. Until Wednesday, we'll simply have to speculate about the level of NSFW-ness the video possesses, and I'm going to fight hard for the Maybe Nicki Isn't Giving Drake a Lapdance, Not Even One Little Bit camp. Sometimes men and women make music videos that look exactly like sexytimes, but can easily be explained by an unrelated third party. So here are a few completely nonsexual things they could obviously be doing instead.

I could see how this shot could be the raciest of the group, with Nicki supposedly reaching for Drake's "anaconda." However, it's possible that she was merely disgusted with the deference to male genitalia in the media, and is pushing his chair away by the most offensive point.

Other Possible Explanations: Nicki is patting Drake down (while looking away in politeness) to check for actual anacondas; Nicki is threatening Drake by pushing his chair back an inch at a time; Drake is bleeding internally and Nicki must maintain constant pressure

Even if you think these grams depict a lapdance, you have to admit that this is the most pensive of the group. Therefore, I think it's probable that Nicki was pacing the room, deep in thought about world affairs, then needed to have a squat to rest her tired feet and calves. Look at those heels, they look painful.

Other Possible Explanations: Drake was rude and didn't give Nicki a turn on the one chair in a room with white-hot floors; Nicki and Drizzy were having a competition to see who could spread their legs wider (Nicki won)

At this point in the image-release-melee, Nicki decided to throw fans a bone by including the caption "the sneaker challenge." Obviously this indicates that the feet are the focus of this picture, meaning that Nicki was merely trying to upstage Drake's sneaker game. Why she chose to smoosh her entire body on Drake during this friendly contest will always remain a mystery.

Other Possible Explanations: Nicki got cold after hours of shooting and needed to cuddle for warmth; some form of bizarre partner yoga; Drake really needed to smell Nicki's face to ensure its freshness

From the caption, we know that this image is all about the silhouette. So, even though it looks like Nicki and Drake are chair-grinding, it's clear that they were coming together for life-sized shadow puppets. They seem to be attempting to make some sort of pair of lobster claws, although it's clear that life-sized shadow puppets might not be their bag. Better luck next time, guys.

Other Possible Explanations: Nicki was rude and used Drake as a man-chair while he was praying; Nicki needed assistance in capturing the perfect butt selfie, and Drake helped out a friend.