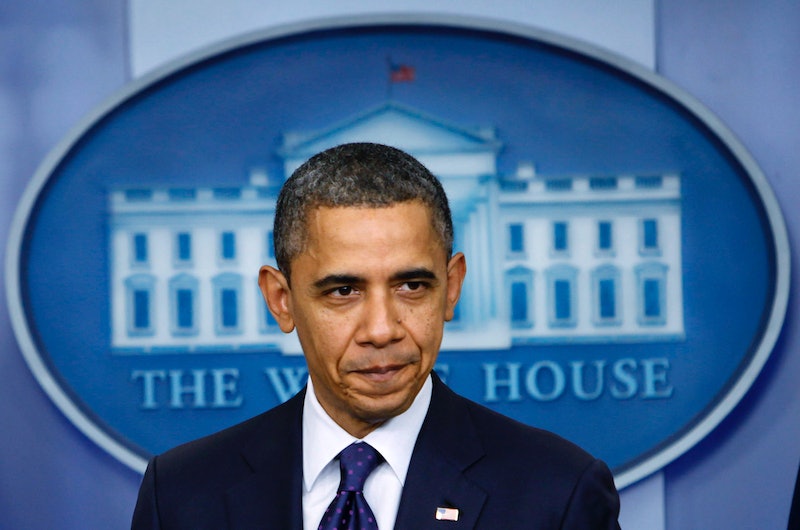 Just four days after he last spoke on the issue, President Barack Obama addressed the ongoing situation in Ferguson, Missouri, on Monday afternoon, once again calling for healing rather than chaos. Although the president has already made a grand civil rights gesture by personally propelling the Justice Department investigation forward, Obama took it a step further on Monday by directly addressing the race relations between the shooting of Michael Brown, the African-American protesters, and Ferguson's largely white police force.

The president reiterated the need for law enforcement to respect peaceful protests in the St. Louis suburb, as well the rights of the press to report on the ground without threat of harassment or arrest.

The president elaborated on the Department of Justice's civil rights investigation into the shooting of 18-year-old Brown, after meeting with Attorney General Eric Holder and Missouri Senators Claire McCaskill and Roy Blunt earlier on Monday. Holder will travel to Ferguson on Wednesday to meet with FBI agents and community leaders. Ronald L. Davis, director of the Office of Community Oriented Policing Services, is scheduled to arrive in Ferguson on Tuesday to work with police officials on the ground.

The DOJ has also ordered a third autopsy on Brown's body. Obama did not comment on the findings from an independent autopsy released by the Brown family's legal counsel Monday morning.

The president noted that the "passions and anger" stirred by Brown's death have been boiling beneath the surface of these "communities that feel left behind," and acknowledged that "a gulf" has existed between law enforcement and minority communities for decades. However, Obama said he has to be careful about not "pre-judging" these events because the Department of Justice works for him. "I can’t look like I’m putting my thumb on the scales one way or another," the president said.

Still, the president's statements are strong, echoing the comment he made in the aftermath of the shooting of Trayvon Martin, another young, African-American man who was unarmed at the time of his death. "Trayvon Martin could have been me 35 years ago," Obama said at the time.

The president reminded the nation that the vast majority of protesters in Ferguson are peaceful. He urged those who are causing chaos through looting, vandalism and violence to stop, because it only "undermines rather than advances justice."

Because the move to activate the National Guard was decided by the state and not the federal government, Obama said he'll be watching over the next several days to see if the guard's presence is used in a "limited and appropriate way." He added that it might be beneficial for Congress to reexamine the programs that militarized local law enforcement agencies, emphasizing that there should be a clear difference between the U.S. military and domestic police forces.