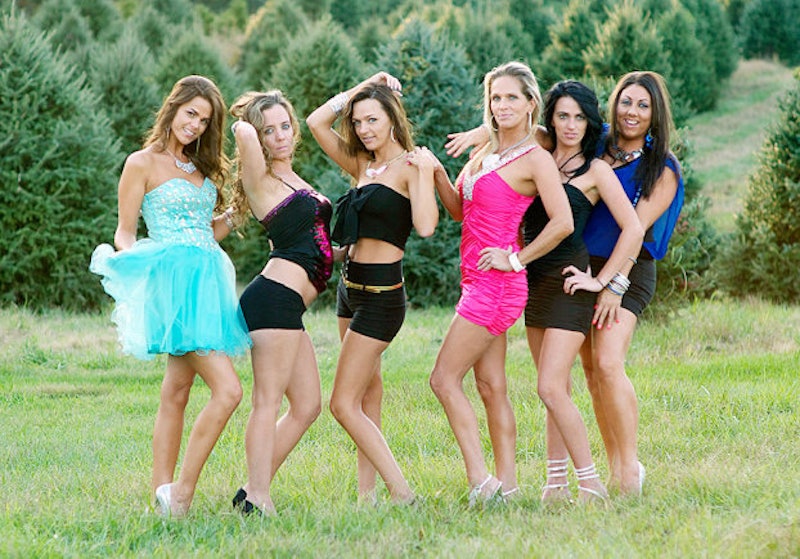 If you've been following the TLC show My Big Fat American Gypsy Wedding and its spinoff Gypsy Sisters , you may be a little familiar with the mixture of the glitz, gaudiness, and glam of its reality show cast, but many viewers might not fully understand what makes someone a Gypsy. First off, My Big Fat American Gypsy Wedding is itself a spinoff of British network Channel 4's Big Fat Gypsy Weddings. TLC also aired this earlier British version with an added "My" to the title before eventually doing its own American off-shoot.

The British series first introduced us to this close knit group people who married young and espoused regressive gender norms while expressing boisterous taste at social gatherings. The programs have garnered controversy for their depiction of the sexualization of young women, with overtly sexualized dancing and over-the-top dresses designed to showcase young women's coming of age and introduction into adulthood.

They've also raised ire with their muddling of the definition of the word "Gypsy" and have been blasted with the charge of being ethnically insensitive to a real, living group of people, with accusations pointing to the cartoon-ification of a rich and ancient culture. The truth lies somewhere in between.

Here is the low-down on all things Gypsy.

What is a Gypsy anyway?

The overarching term "Gypsy" refers to the Romani people, a culturally migrant group who can trace their roots from India all the way to modern Europe and America. TLC's Gypsy primer confirms and also touches on the persecution that historically plagued Gypsy people, including time in concentration camps and the killing of over 1 million during WWII. "Traveller" is also a common term used to describe Gypsy groups, though TLC's Gypsy Sisters identify as Romanichal.

In 2013, The Daily Beast reported on the persecution of Gypsies here in the United States, who are also little known or recognized (when's the last time you saw a checkbox for "Romanichal" for ethnicity on a form or census?). One-sided media portrayals don't help, and the article calls out Gypsies in media for hurting the image of modern folks, who'd like to distance themselves from tales of fortune-telling, swindling, and Esmeralda from The Hunchback of Notre Dame.

Music Is A Big Part of Gypsy Cultural Heritage

While it is not OK to assume every Romani person is some sort of traveling street performer, music is a huge part not only of traditional Romani peoples, but of the histories of everyone they've interacted with. The 1993 documentary film Latcho Drom follows the migration pattern of Gypsy music starting in India and ending in Spain. In the mostly dialogue-free film, you'll see the passing of tradition through generations and the transition from desert processions to vibrant flamenco guitars. It's a must-see for music geeks.

"Want U Back" singer Cher Lloyd numbers among the list of famous Gypsies, with Mirror reporting she was teased for it and often on the receiving end of slurs like "gypo." Jersey Shore favorite Snooki discovered she had a Romani background on her series Snooki & JWOWW.

Like any diverse culture, there are many modern and assimilated Gypsies who eschew the traditional and more orthodox beliefs. However, EveryCulture's database notes some interesting specific mores, especially by way of taboos. Traditional Gypsy beliefs separate the body into an upper "pure half" and lower "impure half" going as far to frown upon washing underwear with linens. Similarly, new mothers and babies are temporarily segregated from the community for a period as childbirth is though to make both impure. The database's thorough study of Gypsy peoples explains the roots of many modern Gypsy customs. The revelry of bright traditional clothes can easily be seen in the dramatic gowns the girls don on TLC's series and their debutante-like debut parties where they connect with suitors speak to the culture's focus on kinship and togetherness (not to mention marriage and family). Mostly, Gypsy people are no different than other immigrant or marginalized groups; they live big, loud, and proud, refusing to be ashamed of what the past has wrought on them.

While the Gypsy reality shows portray a certain type of person, who let's face it, is more about being a "reality type" than any particular ethnicity, it's important to know the heritage behind the people, too. To learn more about modern Gypsies, visit the Gypsy Lore Society.

More like this
Britney Spears Shares Unknown Details Of Conservatorship In New Voice Notes
By El Hunt
Pro Footballer Zander Murray Is "Blown Away" By Support After Coming Out
By Sam Ramsden
How Angelica Ross Plans To Make Roxie Hart Feel “Universal”
By Jessica Derschowitz
Everything To Know About Taylor Swift’s 10th Studio Album, 'Midnights'
By Grace Wehniainen and Jake Viswanath
Get Even More From Bustle — Sign Up For The Newsletter