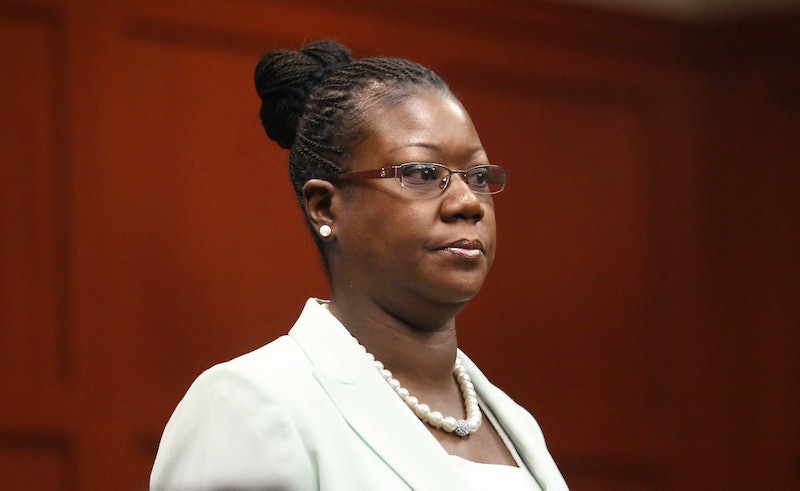 Two days after her 18-year-old son, Michael Brown, was shot dead by a police officer in the streets of Ferguson, Missouri, Lesley McSpadden gave a gripping testimony to local news station KMOV. "You took my son away from me," she said. It's a sentiment that another mother, though 1,000 miles away, can understand. The mother of Trayvon Martin, Sybrina Fulton, published an open letter to Michael Brown's family in Time on Monday, sharing her grief with the family and inviting them to join what she calls the "exclusive yet growing group of parents . . . who have lost loved ones to senseless gun violence."

Much like the story of Michael Brown, news of Trayvon Martin's death at the hands of George Zimmerman, a volunteer neighborhood watch coordinator, went viral in 2012. Martin, who was shot in the chest at a close range, was unarmed as he walked through the gated residential community where he was visiting his father's fiancée.

In the letter, which can be read in full here, Fulton reminds not only McSpadden, but also the public, that tragedies such as Brown's or Martin's deaths are more than just police, gun violence or political cases. Although the humanity aspect tends to be upstaged by the media and legal discourse, Fulton writes that Brown is more than just a case. "Michael is your son," she writes. "A son that barely had a chance to live."

Further complicating the pain and loss in this tragedy is the fact that the killer of your son is alive, known, and currently free. In fact, he is on paid administrative leave. Your own feelings will bounce between sorrow and anger. Even when you don’t want to think about it because it is so much to bear, you will be forced to by merely turning on your television or answering your cell phone. You may find yourselves pulled in many different directions by strangers who may be well-wishers or detractors. Your circle will necessarily close tighter because the trust you once, if ever, you had in “the system” and their agents are forever changed. Your lives are forever changed.

Fulton also provides McSpadden with advice on how to cope with the "facts, myths, and flat out lies" about the case, as well as the inevitable character assassination of her son. Martin received similar attacks over his social media footprint and clothing:

Honor your son and his life, not the circumstances of his alleged transgressions. I have always said that Trayvon was not perfect. But no one will ever convince me that my son deserved to be stalked and murdered. No one can convince you that Michael deserved to be executed.

Fulton currently runs The Trayvon Martin Foundation, which provides support and resources for families of violent crime victims. The foundation also conducts peace talks in communities across the United States to raise awareness.