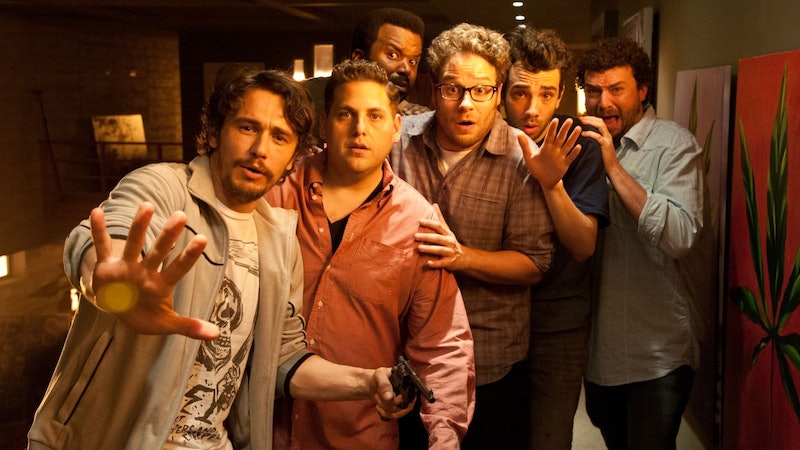 Give a Hollywood heavyweight open reign and $25 million and what do you get? A bro-co that's too heavy on the bro and too light on the co. Seth Rogen's directorial debut This is the End, which he co-directed and wrote with BFF Evan Goldberg, hits theaters Wednesday night. The film stars the duo's besties James Franco, Jay Baruchel, Craig Robertson, Danny McBride, and Jonah Hill (who I know we all love) as they face the apocalypse while playing themselves or, at least, versions of themselves.

Rogen drags Baruchel to a house party at Franco's and all your fave celebs make cameos. (Aziz Ansari! Jason Segel! Paul Rudd!) All of a sudden, all hell breaks loose (literally) and the Earth opens up and swallows most of them while fireballs fall from the sky. The apocalypse has begun. The guys then spend the majority of the film cooped up in Franco's house hiding under the covers, battling it out for a Milky Way and eventually waging an all-out war with the Devil. Sounds hilarious, right?

With an 80 percent on Rotten Tomatoes, the critics are falling all over themselves with praise, but no one seems to be discussing the obvious: Where the hell are the women in this film?

If you couldn't already deduce it from the super brotastic movie posters, the tagline might as well have been "This Is the End… And Who Needs Women?".

So it should be no surprise that This Is the End brilliantly fails the Bechdel Test, which requires 1) at least two named women, 2) who talk to each other, 3) about something other than a man. The film barely passes requirement No. 1 with only three named characters, but doesn't even come close to passing the other two.

Mindy Kaling and Rihanna both make cameos at Franco's party, each with only a few lines of dialogue. Kaling blabbers on about her desire to sleep with Michael Cera while Rihanna yells at him for slapping her ass. A few unnamed non-celebrity women then join Cera in the bathroom for coke and blow jobs.

The most prominent woman in the film is Emma Watson, who appears at the party for a few minutes and shows up later wielding an axe and looking for refuge at Franco's house. Everything's all well and good for about five minutes, until the sextet start making rape jokes (seriously?) and Watson runs away.

Trust us, we could go on and on about the rape joke, but more offensive was the fact that the girls weren't even allowed a chance to play with the boys. There are plenty of awesome ladies who could have showed up for some laughs: Emma Stone, Ari Graynor, Anna Faris, Kristen Schaal, Sarah Silverman, Kristen Wiig… the list goes on and on. Even Kaling could have killed it with a bigger part and more dialogue. (As for Rihanna... let's just say jury's still out.)

True, the film boils down to a bromance (Rogen and Baruchel), but does that mean women aren't necessary? Or maybe the truth is that Rogen and co. just aren't friends with any ladies. Doubtful, considering the cast's been surrounded by them in other films (hello Knocked Up!) and is even married to them. Rogen's wife, Lauren Miller, is the writer and star of the hilarious For a Good Time, Call... — couldn't she bring along some pals for The End?

On the bright side, everyone's favorite '90s boy band shows up in the final few minutes for a killer song and choreographed dance routine. If anything's gonna redeem Rogen for the lack of ladies, it's probably that.