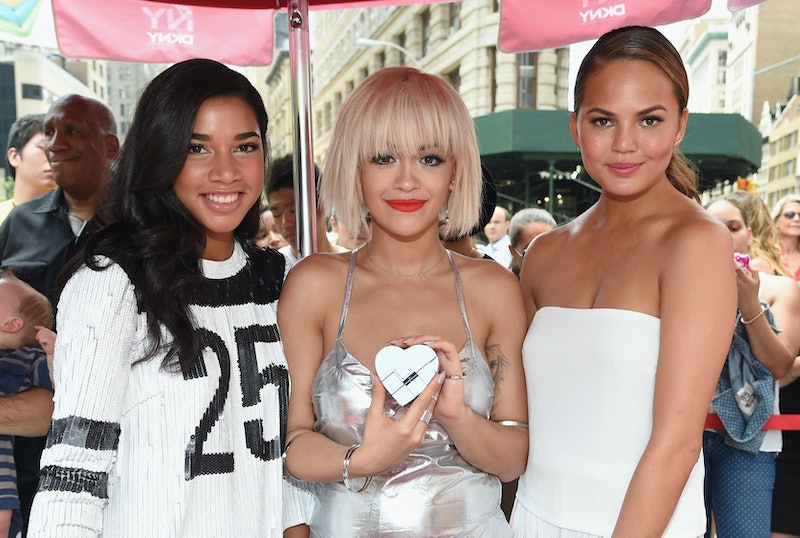 When you combine a scent by DKNY with the formidable Rita Ora and a guest appearance by Chrissy Teigen, you're left with one very chic mashup indeed. Such was the case when DKNY launched My NY, its new fragrance, in New York's Madison Square Park, complete with stacks, guest stars, and Instagrammable material.

With DJ Hannah Bronfman's tunes serving as a soundtrack, Ora took center stage eagerly greeted her fans and posing for pictures whilst strategically placed fragrance spritzers showered guests in a cloud of My NY. The Sports Illustrated fans in the crowd were pleasantly surprised by Chrissy Teigen's arrival. For those guests who felt peckish after waiting in a photo opp line — which could have rivaled the queue for Space Mountain at Disneyland — Dominique Ansel provided custom heart-shaped, sprinkle-laden soft pretzels in honor of the ubiquitous NYC food cart staple.

In order to channel the scent's inclusive "Be a Part Of It" tagline, customers and passerby were encouraged to create a digital collage of personal New York experiences via their individual social media accounts, each end product posted with the hashtag #MYNY.

The scent itself is quintessential Donna Karan fare and could be said to capture the audacious, uninhibited spirit so often seen in New York. With notes of musk, patchouli, vanilla, and pink pepper, this is one scent for the New Yorker who loves to be at the hub of the city's nonstop soiree.