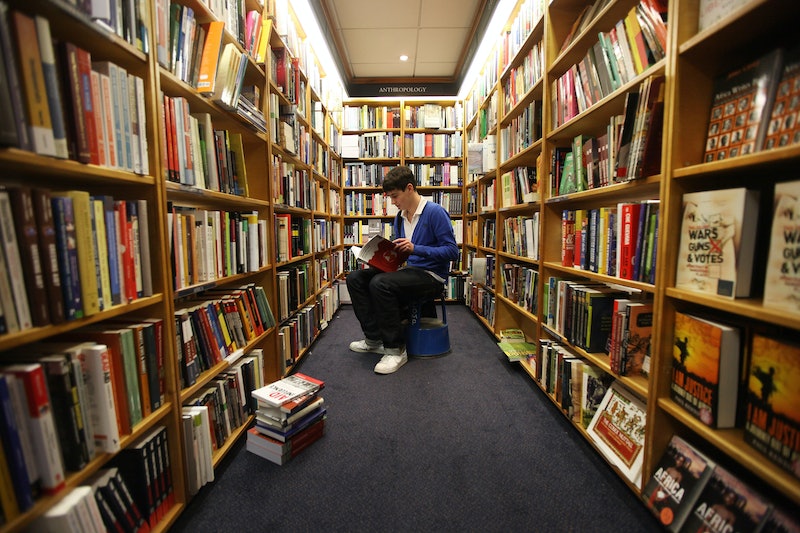 Hopefully, you’ve heard of VIDA, a grassroots organization that serves to openly discuss the role of women in literature. They are best known for their annual VIDA count, which tallies how many women versus men are represented in major literary publications and book reviews. As you might suspect, each year, the final count demonstrates a huge gender disparity with women’s writing being disproportionately absent from journals that can open the door to greater career advances and higher pay. The badass ladies at VIDA want to not only see good old-fashioned equal opportunity for women, but a greater representation of diverse voices. Unfortunately, not everyone in the industry sees it this way. Some are flat out living in another universe.

A small publishing house in California believes that there isn’t enough writing in our literary canon about men... because... well, I'm not entirely sure. According to the call for submissions for Vineyard Press' Passions of Man anthology, "Each entry will be by a man, about something that happened to him, that by and large could only have happened to a man, and that shows women Who Men Are." The capitalization here is all theirs. You’re not the only ones laughing right now at the idea that men are somehow underrepresented in any media anywhere in The Entire World (capitalization all mine).

TheNewerYork, an experimental literary journal out of Los Angeles, also found this idea for an anthology immensely comical. In response, they are creating their own call for submissions. From now until August 31, they're encouraging women (under a male pen name) and men to submit to Vineyard Press exactly what they are asking for, as equally bizarre but in this case satirical. When you're done submitting your writing to Vineyard Press, they want you to also submit it to theNewerYork for the chance to have it featured on their website.

“These old white dudes at Vineyard think that there is something valiant about their manliness. But their anger comes through in their language: they're looking for work 'targeted at women'," Josh Raab, senior editor at theNewerYork told me. "I'm not opposed to any discussion of men's rights but not when it is pitted against women's rights, as if women's rights would somehow encroach upon men's rights.”

Raab hopes to flood the small press with so many submissions that they'll give up on their project all together — or better yet, publish the anthology without ever realizing that it is mockingly filled with writing by women.

Although this would make for a great laugh, their project is about more than just a few laughs. In an appropriate and ironic gesture of brilliance, theNewerYork is asking people to include a $3 donation with their submission. All proceeds will go to the charity WriteGirl, which mentors girls in Creative Writing and encourages them to pursue careers in writing.

“I'm hoping we get some insightful submissions and really, I would love to give a chunk of cash to WriteGirl. It's carbon offset mentality. We will donate to a girl's writing program to counter the effect of the Vineyard Press' aims,” Raab said.

Whether it's for a good cause or a good laugh, get out your laptops and start writing submissions, friends. I've got some kicking around in my head that I'd like to send along, too...

Jay’s mother’s medical expenses have exceeded her means and she is about to lose her house to the bank. Pulling together a small band of friends, Jay attempts to pull off the greatest heist of the century while learning what it means to Be A Man.

A troop of military commandos are dropped off in the middle of a terrorist ridden country where they learn through trials of friendship and loss of blood Who Men Are.

In Ancient Rome, a gladiator is chained and forced to fight for his freedom. When a monster of impossible proportions is released into the stadium for an unfair battle, he must use his will and wits to prove to himself and the onlookers Who Men Are.

After his father’s death, Matthew learns his true extraterrestrial identity. As he learns to tame his newly discovered superpowers, he must also win the heart of Sally Lynn by showing her that he is more than an alien but A Man.

TheNewerYork plans to post the winning entries and the amount of money the contest generated for WriteGirl in mid-September. Get writing, y'all.