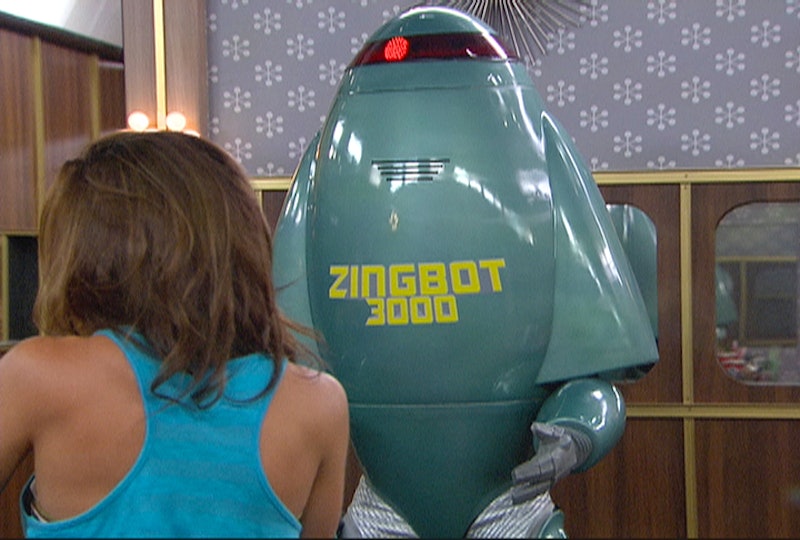 It's a question as old as time (or, at least, since Zingbot 3000 was first introduced in the Big Brother world back during season 12): Who is Zingbot 3000? Not, like, who is the robot — we already know that Zingbot 3000 is a robot that hangs around Big Brother sometimes and throws hilariously timed insults/"zings!" at castmates from the copious amount of time that we obviously all spend watching Big Brother livefeeds and documenting the contestants' every moves. No, I'm talking literally. There is a person inside that gigantic robosuit that walks around, and none of us seem to have a clue who they are. It's one of the biggest mysteries in the world!

We haven't been offered many hints, so I've gotta give it to Big Brother producers — not only have they constructed an astonishingly addictive show, but they are good at keeping secrets. Apart from the one time the person who was in the robosuit passed out from heat exhaustion, we, as viewers, are never made privy to the information about who the poor person actually is.

Luckily, this is the age of the Internet, and hardly any mysteries go unsolved these days. Consider this an investigation.

Now, there isn't much evidence, so don't get too excited. But, after some hasty Internet sleuthing, I've come to the conclusion that the mystery of Zingbot 3000 is very similar to the mystery of A on Pretty Little Liars: It looks like there may be multiple people who take over the role of Zingbot. See exhibit 1: A Big Brother fansite on Tumblr run by a user who was, at one point, affiliated with someone who portrayed Zingbot in season 14.

Exhibit 2: When asked for further info by another user, the user stated the following:

Exhibit 3: More info, in response to a question from another user:

I personally reached out to the user who runs the blog to request more info, but, unfortunately, this is all she knows about the girl who was once Zingbot. The fact that this girl was only Zingbot 3000 in season 14, though, leads me to believe that producers rotate who gets to be in the robosuit per season, so it's either a poor (or lucky?!) intern/production assistant who gets to don the suit, or a freelancer-type person specifically hired to take on the role of Zingbot 3000 on a per-season basis. Either way, any speculation that the person in the suit could be a cast member is likely false.

This concludes the investigation. Though we didn't find any concrete information, at least we're all a little more knowledgeable about Zingbot 3000 now, right?

Anyway, we'll probably never find out who's in the Zingbot costume for sure. Some things, after all, are better left a mystery.