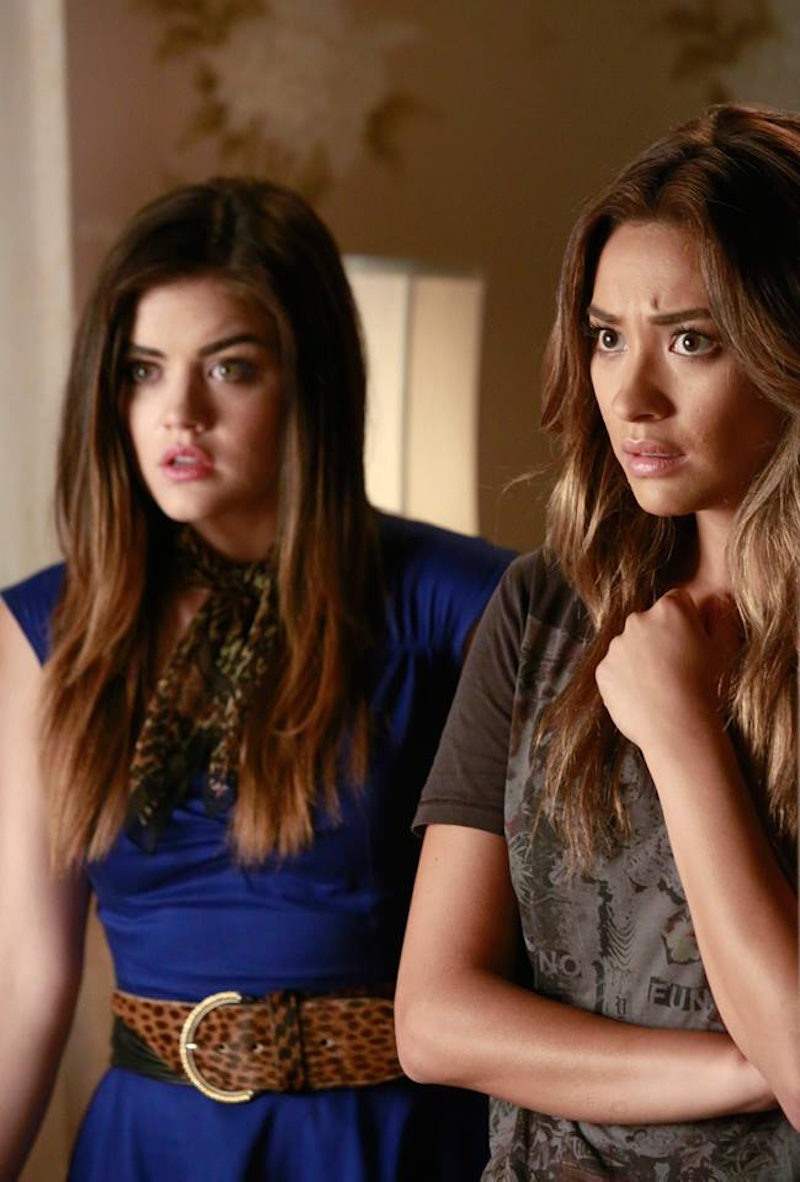 Talk about a Freudian slip. Pretty Little Liars finally killed Emison last Tuesday and this week, Emily Fields continued her truth tour even if it was by mistake. After finding out that Alison planned to tell Detective Tanner a new story about New York and her kidnapping, Aria, Spencer, and Emily got together to discuss their options. Alison's increasingly shady behavior had me wondering whether she's even less of a victim than the show let on last week. And on Tuesday night, Emily called Alison "A" by accident and I immediately realized how likely it is that Alison is her own tormentor.

While Spencer and Aria seemed pretty horrified at Emily's slip, I definitely wasn't. First of all, Alison was missing from the entirety of this week's new episode — I know, she was supposed to be "away" with her dad worrying about Cyrus. But there's a reason why PLL's made into a more secretive and distant character with each Season 5 episode. And following Spencer's reveal of Melissa's confession to her friends, the three liars present and myself realized something else — Bethany Young being dressed exactly like Alison on the night of her death is a wildly important detail. Like, more important that catching Ali in one of her many lies.

It's possible that Alison planned this entire thing all the way down to her outfit that night so that she could fake her own death for a reason still unbeknownst to us. I mean, it's not that far off, considering she planned for Noel Kahn to break into Hanna's house and scare her mother and she planned to have Cyrus come to Rosewood and confess. I wouldn't be surprised if she also planned for "A" to attempt to strangle her in her empty house at this point.

Alison's web of lies and secrecy is slowly starting to unravel and it's becoming more likely by the episode that she's the mastermind behind all of Rosewood's drama. Could Ali be "A"? Absolutely.

More like this
The 'Freeridge' Cast Shared Their Hopes For A Potential Season 2
By Grace Wehniainen
You Might Want To Rewatch This Key 'On My Block' Scene To Understand 'Freeridge'
By Grace Wehniainen
A 'Terminal List' Sequel & Spinoff Are Reportedly In The Works
By Kadin Burnett and Grace Wehniainen
This 'One Tree Hill' Wardrobe Error Is Going Viral On TikTok
By Brad Witter
Get Even More From Bustle — Sign Up For The Newsletter
From hair trends to relationship advice, our daily newsletter has everything you need to sound like a person who’s on TikTok, even if you aren’t.