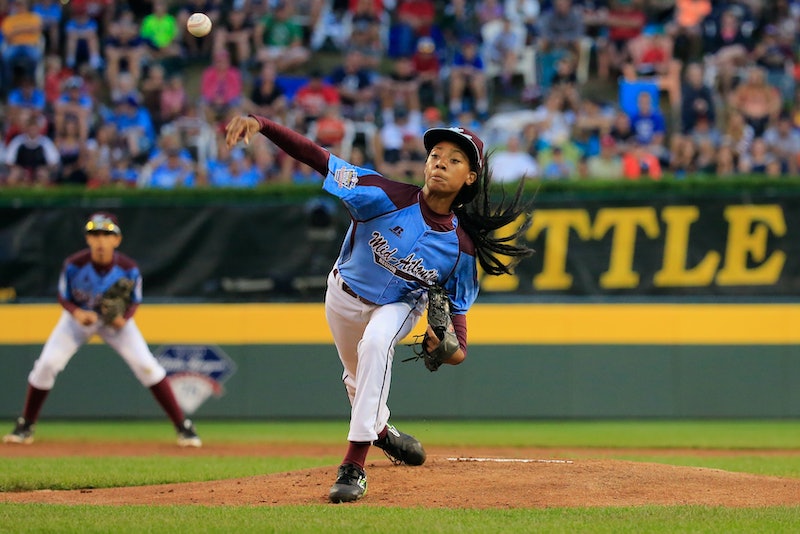 She's won over an entire nation, but she didn't earn the title by being quiet. Mo'Ne Davis, the Little League superstar pitcher who threw record-setting shutout games in the Mid-Atlantic Finals and the Little League World Series — and this month became the first Little League player to land a Sports Illustrated cover — has been busy imparting some words of wisdom way beyond her 13 years.

Mo'Ne, who plays for Philadelphia's Taney Dragons, was only the fourth American girl to ever participate in the Little League World Series. But the way she dominated the 4-0 shutout game against Nashville, you'd think that Little League baseball was a girls' sport.

It should be, or so Mo'Ne believes. The teen from South Philly, who's been striking out boys with her intimidating 70-mph fastball, has frequently commented on the gender divide in Little League baseball — namely that there shouldn't be one.

She may instill fear in her opponents stepping up to bat, but she's been inspiring people the world over with her positive spirit and fierce attitude.

On Her Undebatable Skills

When asked who she pitches like, Mo'Ne compared herself to the L.A. Dodgers' pitcher, while also stating (correctly!) that her fastball is unmatched: "I throw my curveball like Clayton Kershaw's and my fastball like Mo'Ne Davis."

"Throwing 70 miles an hour — that's throwing like a girl," she told CBS News.

When ESPN asked what she thinks her limit is, Mo'Ne answered, "To go as far as I can."

"I don't really like all the attention because it just feels like everything's about me, and they don't see the whole picture of my teammates," Mo'Ne told ESPN. "And without my teammates I don't think we'd be here right now."

She's praised her teammates to CBS News as well, saying, "I can't fill all nine positions or bat all nine times, so you just have to see the whole reason why we're here is because we work well together and we work as a team."

And to ESPN, she added: "I never thought I'd be a role model at this age. I just have to be myself."

On Being a Girl in a Boys' Sport

"Probably, like, a couple of years from now, there'll be a lot of girls here," Mo'Ne told CBS News. "And then it won't be just like all boys, so they'll have to build like another dorm for girls, so it'll be a huge impact if more girls start playing."

"It does mean a lot to be the first American girl, but more girls should start joining boys’ teams," Davis told the Philadelphia Daily News. "The attention should not just be on one girl; more girls should join boys’ teams so it is a tradition and it won’t be so special."