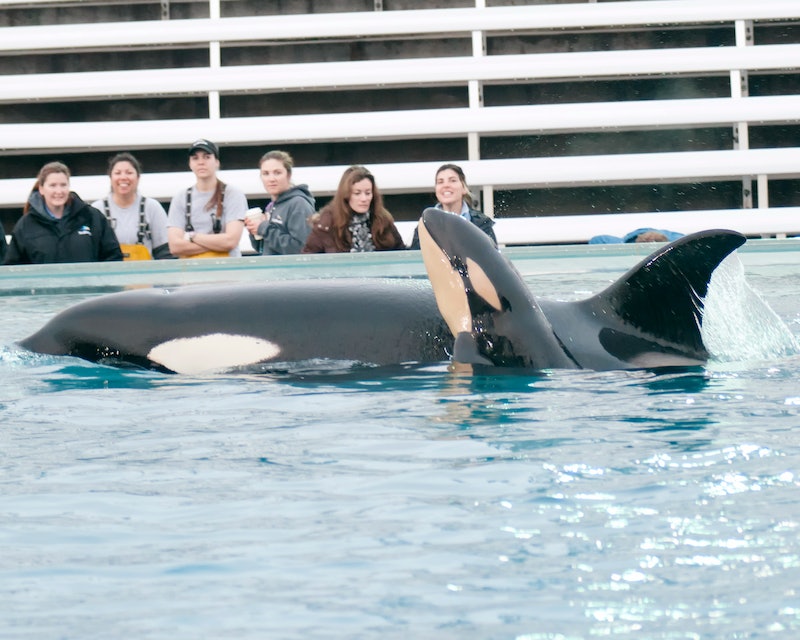 If you've seen harrowing documentary Blackfish, you know why things haven't been going well for SeaWorld lately. Still, the marine-animal theme-park company is trying: SeaWorld San Diego recently agreed to expand its orca tanks so the giant mammals can stretch their fins while in captivity. The company has also thrown its weight behind SeaWorld's orca trainers, denying to appeal a court ruling keeping SeaWorld trainers out of the killer whale tanks. Basically, SeaWorld won't be going to the Supreme Court after all.

The Occupational Safety and Health Administration, an agency under the U.S. Department of Labor, hit SeaWorld with three citations following the death of orca trainer Dawn Brancheau at the Orlando park in 2010 — an incident at the heart of Blackfish. According to the filing, Brancheau was reclining on a platform several inches below the water's surface when Tilikum, an orca responsible for two other deaths, pulled her off the platform. Brancheau suffered traumatic injuries and drowned. (If Tilikum's name sounds familiar, it's because he's the whale at the center of Blackfish.)

Although SeaWorld parks removed trainers from the water following Brancheau's death, the company tried appealing one of the citations, which said trainers must remain behind a barrier when they work with the killer whales. A panel on the U.S. Court of Appeals in Washington, D.C., ruled against the company in April.

To be sure, SeaWorld has increased its safety measures for its killer whale trainers over the years. The same month of the appellate court's decision, SeaWorld parks debuted inflatable safety vests for orca trainers, in case they fell or were pulled into the tanks. According to The Associated Press, the five-pound vests inflate like a floating device, and feature small oxygen tanks.

SeaWorld also revealed several other new safety features this spring, reported the AP, including remote-controlled pool gates and special platforms that can lift a whale out of the water in case of emergency.

A lot of people remain unhappy with SeaWorld and its treatment of both the orcas and their trainers. The animal-rights activist group PETA recently bought more stock in SeaWorld, as a means to eventually gain some control over the theme parks and release the killer whales from captivity.

By buying more stock in SeaWorld, we can continue to push executives toward the only humane solution for the orcas captive and that is relocating them to the coastal sanctuaries.

Not only has SeaWorld's stuck plummeted this year — it fell 33 percent last week alone — but the parks' attendance and revenue is way down across the United States. According to The Chicago Tribune, SeaWorld second-quarter profit of $405.2 million was far below Wall Street's prediction of $445 million.

Trainers may not be able to swim with the killer whales ever again, but at this rate, it's the least of SeaWorld's troubles.

More like this
If You Have A Dog, Trainers Say These 30 Clever Things Will Genuinely Make Your Life Easier
By Dena Ogden
What Is Happening With Sheku Bayoh’s Case?
By Sophie McEvoy
The Most Powerful Photos From The Weekend’s Abortion Rights Protests
By Melanie Mignucci
Jurnee Smollett’s Heart Is Healing
By Rebecca Carroll
Get Even More From Bustle — Sign Up For The Newsletter