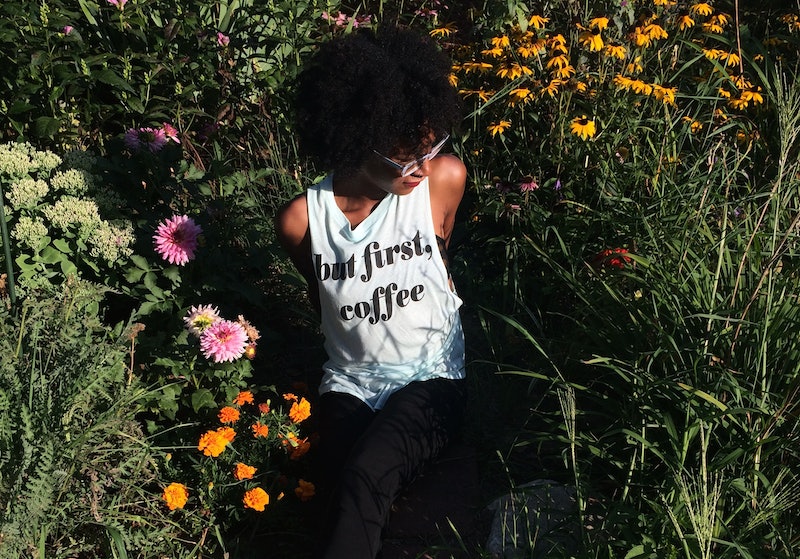 A month after the festivities of my 29th birthday dialed down, I was in a full state of panic about my upcoming 30th. I began indulging in the (mostly imagined) pressure to settle down, get a man, and start pushing out babies. If that wasn't enough, I would peer closely at my face in the mirror, imagining the lines on my face growing deeper and darker. I started noticing that I was now subject to hangovers and my usual cup of coffee in the afternoon was now keeping me up until 4am.

Obviously, it wasn't soon before I started to fret about my inevitable death — because that's what turning 30 seemed like to me. I didn't want a suburban home, I didn't want babies, and I didn't want to work a typical 9 to 5. I had to keep telling myself that my adult-dream was different than many of my peers and there was nothing to worry about.

Eventually, the anxiety needed to take a backseat and make room for the overpowering excitement I feel every time I have a birthday. Needless to say, I was blind-sighted when my fear returned while I planned my celebratory seven day Me Fest and stumbled upon an article that was a lengthy list of things you shouldn't wear in your 30s.

It was as if the article had channeled the conservative viewpoint of Ronald Reagan from the dead. "30s" appeared to be a world with short, chic bobs, high-cut dresses that bellowed out at the waist, and way too many 'slacks'. A world where whimsical patterns, blazers, and kitten heels ruled the streets. "Damn you, Reagan" I whispered under my breath, "Damn you."

It was hard to not let the article get into my head, when I had already read an article on all the things I should stop doing at the age of 30 and about half of the list were things had I done that very week. Not being someone who would cancel birthday festivities, I proposed a ground-breaking idea where I would simply turn 29 again. It was rejected, heavily, and with eye rolls.

The negative connotation and outside pressures of turning thirty had spiraled me into a woe-is-me/I'm-the-only-person-that-has-ever-turned-30 state of mind. However, it turns out that being in my 30s is awesome. For one thing, landlords are less likely to take advantage of you. Plus, you get to say things like "I'm a grown-ass woman" — which is awesome. The fact that my bank account isn't constantly overdrawn as it was 10 years ago is largely due to the fact that I have established myself further in my career. Increased income means I want to spend my cash on some fly-ass jewelry made by my fave taxidermist, I want MORE tats because I can afford it, and I'd like to spearhead a movement to allow crop-tops in the office. Oh, and invest in stuff too... totally...

If anything, the fact that I have made it to 30 should be a reward to do whatever I want. So, that's exactly what I am doing. The thing about the dos and don'ts of your 30s is that 1. I'm a grown-ass woman, how you tryin' to tell me what I can and can't do??? 2. Who wants to look or act their age? Read a book, open a webpage: Everyone is trying to look younger and feel younger. Here are a few things that Reagan's children think you can't wear that I am just buying more of. Why? Because F that shit!

It was suggested to me recently that I should retire my backpack. My reaction? "How am I supposed to carry my laptop then, brah?" Backpacks are the original hands-free device. I've been wearing one since kindergarten, and you know what? I want to be buried in one.

Anyone who thinks crop tops should retire after someone turns 30? Just. Stop. Please. Everyone should wear a crop top. They promote a healthy body image and they can be worn to casual or formal affairs if you do it right. The fact that someone is 30 doesn't mean they don't get to look and feel sexy anymore.

Look, I like to buy locally made garments as much as the next person, but you know what? That shit is expensive. Typically, I'm a thrifter or I'll spend an alarming amount on the exact same item at American Apparel that is also available at Forever. If I need a sudden outfit change on the fly? Nothing is stopping me from walking into Forever 21 and coming out with leggings that have an upside down cross on them. Nothing.

There should be no correlation between music and age. Whether you're turning 30, 40, or 50, please keep showcasing your musical preference and promoting your fave underground bands. Music tees are a great conversation starter and a casual garment to wear with a pair of jeans, a short skirt, or slouchy pants — all things you should also be wearing in your 30s.

Whaaa? No crosses? Welp, there goes one of my hand tattoos, 5 necklaces, 3 pairs of earrings, and a pair of tights. The symbol of the cross (and its variations) held many meanings for Pagans and Egyptians prior to the adoption of the symbol by Christianity, ranging from a symbol of life to a symbol of crime. Plus, they just look cool.

Please tell me it's a vicious rumor that no one wants to see your stomach after 30? If that's the case, why did I work so hard to keep a tight, healthy bod and become financially independent in my 20s if I'm not afforded the luxury of something as crucial as a bra top once I hit the big 3-0?

I don't know that I've ever purchased a pair of sunglasses that weren't a fun shape. I mean, hey, if the sun is so fun, then shouldn't your sunglasses be as well?

Nail art is the best way to temporarily express yourself. If you work a gig where a crazy mani is just completely unappreciated, than retire your weekend nails on Sunday. There's certainly no reason to ditch them altogether.

Many people have a particular aversion to wearing gold teeth: they think it's "low-brow" or they just think it's outdated. Personally? I think gold teeth are DOPE! The key is to avoid gold teeth implants that are rooted into your jaw — not every occasion is going to call for a pair of gold teeth. That is a fact regardless of your age. Get a pair of grills that you can have fun with that won't leave you with damage teeth and regrets.