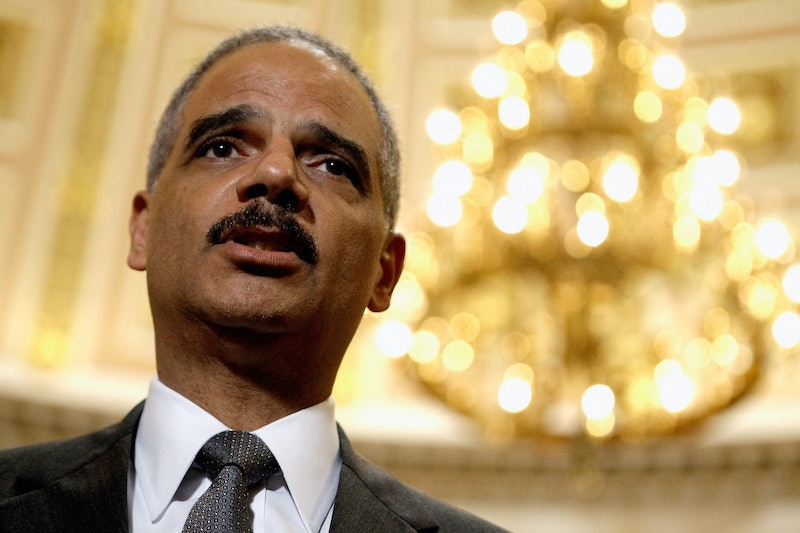 Five years ago, he chastised Americans for being "cowards" when it comes to race issues. After arriving in Ferguson, Missouri, on Wednesday, Attorney General Eric Holder may finally spark those long-overdue race discussions. While meeting with law enforcement officials and community members in the St. Louis suburb, Holder spoke candidly about his experiences as a black man in a country that continues to sweep race relations under the proverbial carpet.

"I am the attorney general of the United States," Holder said as he addressed the crowd at Ferguson's Florissant Valley Community College. "But I am also a black man."

Holder, who's the first African-American to serve as the U.S. attorney general, said he understood the anger and resentment of Ferguson residents, particularly in regard to racial profiling and police harassment. While speaking to the audience of young African-American college students, he recalled:

I can remember being stopped on the New Jersey turnpike on two occasions and accused of speeding. Pulled over … “Let me search your car” … Go through the trunk of my car, look under the seats and all this kind of stuff. I remember how humiliating that was and how angry I was and the impact it had on me.

I think about my time in Georgetown — a nice neighborhood of Washington — and I am running to a picture movie at about 8 o’clock at night. I am running with my cousin. Police car comes driving up, flashes his lights, yells “Where you going? Hold it!” I say “Whoa, I’m going to a movie.” Now my cousin started mouthing off. I’m like, “This is not where we want to go. Keep quiet.” I’m angry and upset. We negotiate the whole thing and we walk to our movie. At the time that he stopped me, I was a federal prosecutor. I wasn’t a kid. I was a federal prosecutor. I worked at the United States Department of Justice. So I’ve confronted this myself.

President Obama said earlier this week that Holder would travel to Ferguson to oversee the ongoing Department of Justice investigation into the fatal shooting of 18-year-old Michael Brown. More than 40 DoJ officials are reportedly on the ground in Ferguson, meeting with officials and collecting eyewitness testimony.

Holder's appearance in Ferguson, however, seemed to have a different effect — one that strove to create a dialogue with the community, rather than overseeing it. "He really listened a lot to the residents. I think he has a good sense of what’s going on," Adolphus Pruitt, president of the St. Louis chapter of the NAACP, told MSNBC.

Holder was also largely informal, meeting with Missouri Highway Patrol Capt. Ron Johnson at a local diner. "You are the man," Holder said when he embraced Johnson.

Holder's visit — as well as the DoJ investigation — is unprecedented for an U.S. attorney general, but it's also about time. Although Holder had promised to be a fighter for civil rights when he was appointed to the position in 2009, he had yet to present such a clear message on race relations in the United States as he did on Wednesday in Ferguson.

Obama was criticized, by some, for playing it too safe when he addressed Michael Brown and the escalating Ferguson protests earlier this week (though I personally applauded the president for "going there" at all). As The Los Angeles Times wrote, Obama knew his "self-imposed limits" before addressing the nation. But Holder, it seems, was limitless.

"The reality is the dialogue is not enough," Holder said on Wednesday. "We need concrete action to change things in this country."