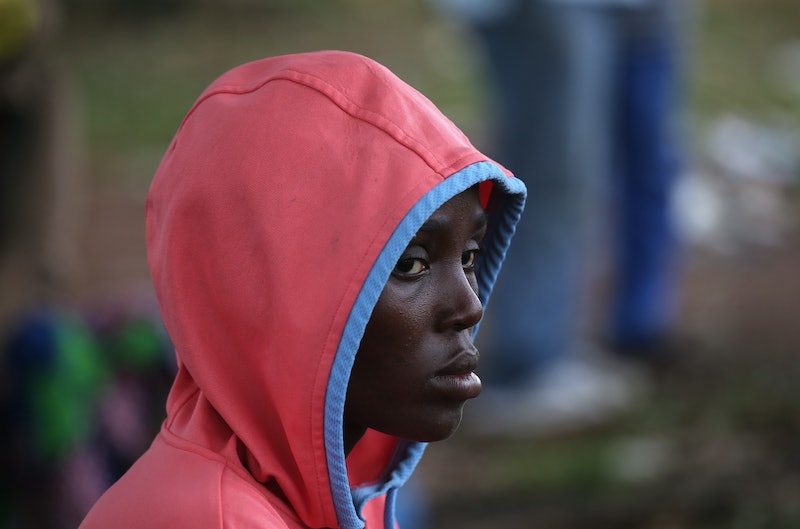 As West Africa's Ebola outbreak continues to escalate, the death toll is inching toward 1400, according to the World Health Organization. Efforts to isolate the deadly virus have been repeatedly thwarted: Local residents have mobbed quarantined areas, and access to items such as latex gloves and body bags remains limited. But some new information could help medical researchers further understand the spread of the virus: A majority of Ebola victims are women, according to West Africa officials.

According to the Liberia Ministry of Health, 75 percent of the nation's Ebola victims are women. In neighboring Sierra Leone and Guinea, where the Ebola virus has also had a devastating effect, up to 60 percent of the infected individuals are women.

Researchers cite gender roles as the likely explanation: Women are the primary caregivers in these West African nations. As a result, they are more likely to stay in the homes of their sick relatives, bathing and aiding them while they're alive and preparing their burials after they've died.

In an interview with The Post , Julia Duncan-Cassell, Liberia’s minister for gender and development, said:

Women are the caregivers — if a kid is sick, they say, ‘Go to your mom.' The cross-border trade women go to Guinea and Sierra Leone for the weekly markets, [and] they are also the caregivers. Most of the time when there is a death in the family, it’s the woman who prepares the funeral, usually an aunt or older female relative.

Women are also more likely to serve as nurses, hospital workers or health-care aids, placing them in direct contact with infected patients. And because of the current shortage of gloves, masks and other safety items in West Africa, these women health-care workers are typically unprotected.

Aside from societal gender roles, women may be more vulnerable to contracting and dying from Ebola if they're pregnant. The World Health Organization states pregnant women may be more susceptible to the virus, because their immune systems are more sensitive.

Previous Ebola outbreaks have shown the deadly effect the virus can have on pregnant women. A study published in The Journal of Infectious Diseases found that the Ebola mortality rate among pregnant women during an outbreak in the Democratic Republic of the Congo was 95.5 percent — higher than the overall mortality rate of 77 percent. The researchers said more women than men were also infected during that outbreak, which would be consistent with the current outbreak.

But a pregnant woman may pay the price during Ebola outbreaks in other ways — including being stigmatized by doctors and hospital workers. A 2011 report from the WHO cited past research that concluded pregnant women are more likely to contract Ebola from healthcare settings, where bodily fluids often mix. Because Ebola is transmitted through bodily fluids, pregnant women are often denied care, as doctors — ill-equipped to handle an Ebola outbreak — fear for their lives.

BuzzFeed's Jina Moore reports on recent cases in Liberia, where pregnant women are now dying from pregnancy complications, not the Ebola virus itself:

Fofana is not the only mother-to-be lost to the Ebola panic that has gripped Liberia. On Wednesday, a pregnant woman near the capital, Monrovia, died of labor complications because she couldn’t find a clinic to treat her. Last week, a woman died of a miscarriage for the same reason.

Perhaps the best way to understand how Ebola greatly burdens women is by looking at the origins of the current outbreak, which is the largest since the virus was identified in 1976. Earlier this month, The New York Times traced the outbreak back to a 2-year-old boy in a remote Guinea village on the border of both Liberia and Sierra Leone. After the boy's death, his mother contracted the virus, then his sister and grandmother. All had lived together and cared for the boy, and then, each other.

More like this
For These Abortion Clinic Volunteers, Going TikTok Viral Is A Risk Worth Taking
By Audra Heinrichs
5 Ways To Stand In Solidarity With Women In America From The UK
By Sophie McEvoy
How To Fight For Reproductive Rights, Based On How Much Time You Have
By Courtney Young
Every Single Big & Small Way You Can Fight For Abortion Rights
By Tess Garcia
Get Even More From Bustle — Sign Up For The Newsletter