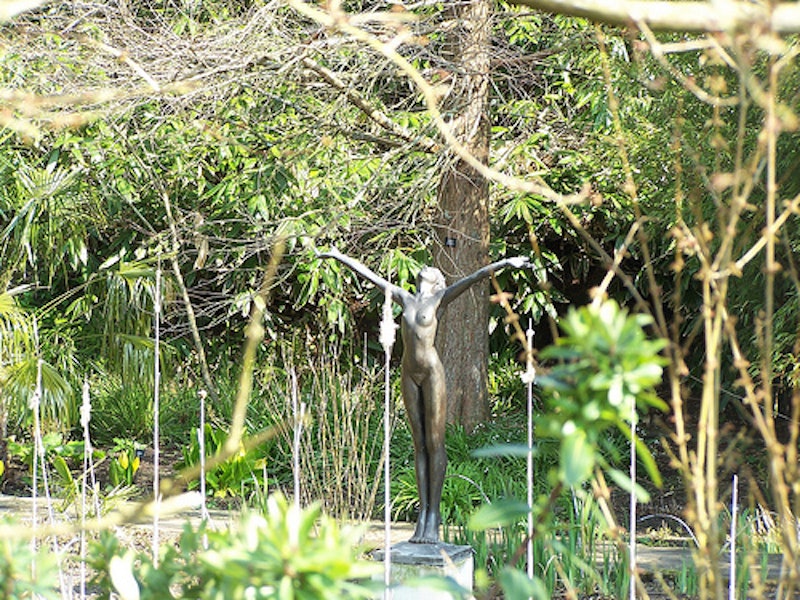 In the state of Georgia, it's 100 percent legal for a woman to be topless in public. But that didn't stop an Atlanta police officer from arresting Gabrielle Mirville during an outdoor art photo shoot on the morning of August 4.

Mirville was modeling for art photographer Robert Oliver and his wife/assistant Kanishia in downtown Atlanta at 6 AM when she was arrested and subsequently jailed, despite that the incidents of nudity (only topless nudity, by the way) were brief; Mirville was clothed except for the exact moments when photographs were actually being taken. She spent nine hours in jail before she pled "no contest" to a charge of public indecency (since she was unaware of Georgia's law at the time) and paid $500 to be released. Reportedly, when she tried to explain her situation to Judge Terrinee Gundy, she got a lesson on proper feminine comportment:

"When I tried to explain to the judge, she said, 'No, and next time maybe you'll learn to carry yourself like a lady.'"

My reaction to that can be summed up as: !!!!!!!!!!!!! It's not like Mirville was walking around topless at a crowded event where people could easily complain that she was sullying the innocent eyes of children or tempting people towards Satan via her nipples or something — although if she were, it would still be totally legal for her to have her shirt off. No, this happened during the early morning, in a place that was uncrowded. It's a stretch to say that an artistic photo shoot can be construed as "lewd exposure of the sexual organs," which is one of the ways Georgia's legal code defines public indecency. In addition, the photographers she was with said they'd had an understanding about public nudity with Atlanta police in the past, considering they'd done similar shoots around the city.

You should read Atlanta's Creative Loafing's thoughtful analysis of the situation, including the obvious problematic gender issues at play:

Mirville was not choosing to engage in sexual conduct that morning. Someone else made that choice for her, despite her protests, and acted according to his feelings about her body. This mentality speaks to a culture of objectifying women that is so deeply embedded in our collective social psyche that it's challenging for even the most equal-minded individuals to view a woman's exposed body as benign. It's a culture that, in fact, beats into women and men the notion that female bodies are exclusively sexual, even when acting in ways that would be innocuous and permissible for men. That's the real goal of the topless equality movement; it's not necessarily about the right to bare breasts, rather a larger mental shift toward normalizing women's bodies for the betterment of their entire social standing.

Topless laws have been in the news this summer; a few months ago, NYPD officers were reminded that women have the right to be bare-breasted in public in New York, and a topless activist in NJ is currently on a hunger strike while in jail in protest of her 2008 arrest. Although I don't think I'll be going topless in public anytime soon, either to model or to assert my right to let my bare breasts feel the summer sun, it's obviously any woman's right to choose to do so, especially if it's legal where she lives. I hope that drawing some attention to Gabrielle Mirville's case will force the Atlanta Police Department to be more careful about carrying out the letter of the law, but unfortunately I think we have a long way to go before women's bodies aren't considered indecent.