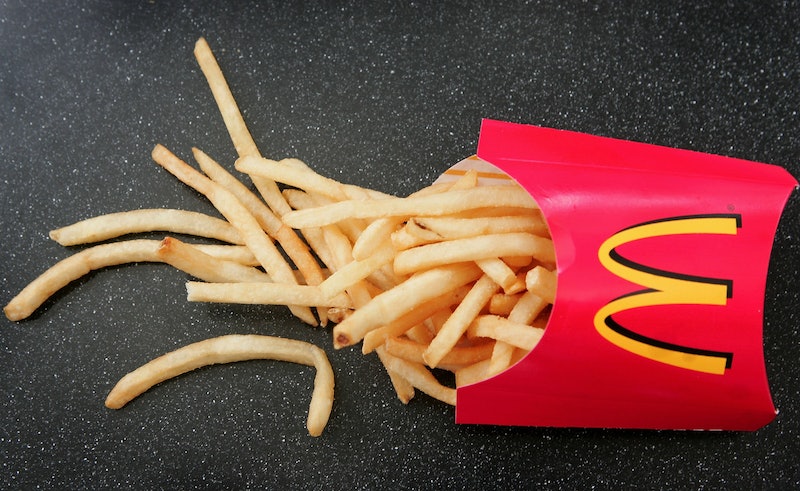 If you can light it up and smoke it, don't eat it. The simple message behind the video of Trevor Ferrell smoking a McDonald's french fry is probably the most convincing don't-eat-fast-food PSA I've seen in a long time, and I've seen a lot. After all, I wouldn't eat a cigarette, so why would I eat what Ferrell has dubbed a "cigafry?"

Ferrell's viral video was uploaded to Facebook on Aug. 16, and over the course of the past week, has been shared over 100,000 times. The 117 comments on the video are largely of shock and disgust, with many people swearing off the fast food chain in horror.

Ferrell is not the first person to try this little experiment, and in fact, not even the first person to record himself doing it — in 2009, a video emerged on YouTube of a group of friends attempting to smoke a french fry (though the fry's origins remain unknown). It met with limited results and has only been seen around 2,300 times.

Ferrell's video, on the other hand, clearly demonstrates that a McDonald's fry is quite flammable, and able to produce smoke that can then be inhaled and exhaled in the worst substitute for a cigarette anyone has ever heard of.

In his video's description, Ferrell explains that the stunt was inspired by other folks who claimed that they had successfully lit and smoked a McDonald's french fry, and like any responsible adult, Ferrell took it upon himself to do some firsthand fact-checking.

The video begins with him making a preliminary attempt at lighting the fry — it seems like a hopeless endeavor at first, as the little bugger seems to have no interest in catching on fire. But after about 30 seconds of persistence, Ferrell is met with his reward — a lit, smokable french fry.

One inhale later, and we are in uncharted territory, and a voice off camera can be heard exclaiming in distaste, "Ugh, it's working." To this, Ferrell responds, "Who can smoke a cigafry?" And so, ladies and gentlemen, the greatest new word of 2014 was coined.

But in all seriousness, who can smoke a cigafry? After taking another puff, Ferrell displays the fry to the camera, reiterating, "Bro, I'm smoking a french fry." Yes, yes you are, Trevor. And I'm every bit as repulsed as you.

"What's it taste like?" the mysterious off-camera voice asks, to which (in the best two seconds of the video), Ferrell responds, "What's it taste like? Like crap!" No surprise there, smoking incinerated and heavily processed pieces of a potato doesn't seem like it would ever be a particularly tasty event.

And then, Ferrell's powers of persuasion kick in. "Guys, happy meals and all that, your kids asking for 'em . . . they're doing something to this food guys, I'm telling you." And he's right. A quick Google trip over to McDonald's ingredients page shows that their famous fries contain no fewer than 17 ingredients. Seventeen! A Mickey D's fry is much more than a slice of potato cooked in a bit of oil — rather, it contains a whole slew of yummy preservatives and frightening chemicals.

So in answer to Ferrell's next question of "What [are] these folks giving us?" I've done a bit of research. Included in this laundry list of ingredients is natural beef flavor (sorry, vegetarians), sodium acid pyrophosphate (to keep your taters white), TBHQ (which causes stomach tumors in rats), and a mix of four different kinds of oils (because old fashioned vegetable oil just isn't enough to do the trick).

This artful concoction of unpronounceable ingredients are part of the reason that McDonald's products seem impervious to the forces of nature, like mold, rot, and decay. As the documentary "Super Size Me" and numerous successive projects have shown, leaving a McDonald's meal untouched for months upon months seems to have no effect on the food.

"This is what people crave . . . and love?" Ferrell asks, incredulous. "We've been giving our kids this for years," he continues, spinning the still smoldering (still smokable) fry in his hand. Brandishing the cigafry in front of the camera, Ferrell saves the kicker for last, challenging McDonald's fans everywhere, "Is this how we wanna feed our kids? Is this what we want in our systems, guys?"

After a final puff, Ferrell departs, declaring, "I'm gonna go brush my teeth, that was nasty," and concludes the greatest anti-McDonald's campaign to date. While critics of the chain have chastised the restaurants for years, none of their efforts have been as organic or as convincing as Ferrell's two-minute video.

Previous attempts to knock down the fast food giant have included anti-obesity ads, ingredient shaming, and accusations that McDonald's contributes disproportionately to the health issues of the least affluent Americans who are unable to afford higher quality, less fattening foods.

But as valid as all these notices are, few of them hit home in the same way that Ferrell's video does. There's no acting, no pretense, no nothing — just a man smoking a french fry. And if that doesn't convince you to stop eating McDonald's, I don't think anything will.

More like this
The Families Of Grenfell Tower Are Still Waiting For Justice, Five Years On
By Bustle UK
The 4 Best Blenders For Nut Butter
By Elizabeth Enochs
Taco Bell Announced A Crunchwrap & Tostada Made With Cheez-Its
By Emma Garza
Is The Insta-Famous Always Pan Actually Worth It?
By Jessica Goodman
Get Even More From Bustle — Sign Up For The Newsletter