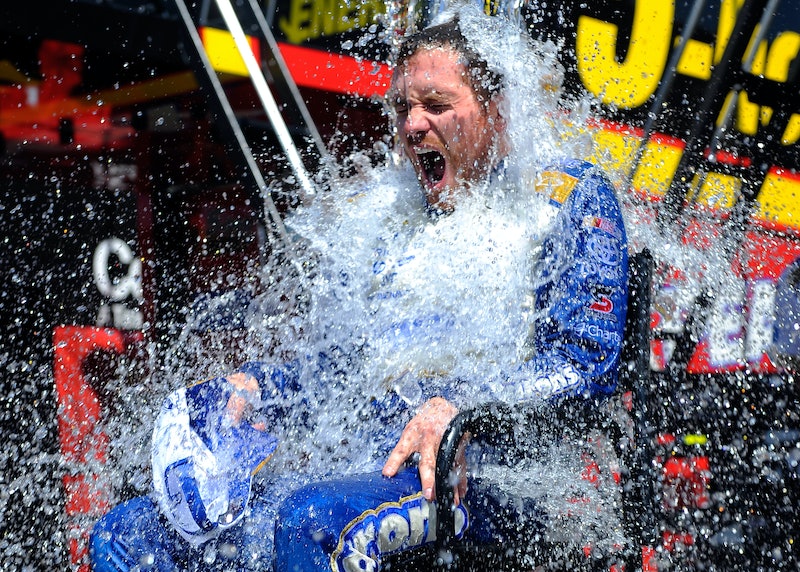 The wildly popular ALS Ice Bucket Challenge hasn't just revolutionized fundraising campaigns, it's practically reinvented them. As of Thursday, the ALS Foundation has about 41.8 million reasons to thank the slightly masochistic challenge. But California isn't feeling the love. In fact, the ALS Ice Bucket challenge may be contributing to California's drought, and some residents are less than pleased.

Of course, the challenge's cause is a worthy one, and regardless of its faults, the Ice Bucket Challenge has helped the ALS Foundation raise 20 times more this year than it did last year. But it comes at a cost — our most precious natural resource, and one that some areas of the country (and many parts of the world) are in desperate need of.

Estimates from The Washington Post and the Long Beach Post suggest that the ALS challenge has used between 5 and 6 million gallons of water thus far. The Environmental Protection Agency estimates that the average American family of four uses about 400 gallons of water a day, which means that the amount of water poured on the collective heads of Ice Bucket Challenge participants could be used to provide the water supply of 15,000 Americans.

And in California, which is well into its third consecutive water-less year, that sounds like an awful lot of H2O going to waste (especially since pouring water on your head is usually done as an alternative to donating to the ALS Foundation).

In fact, California Gov. Jerry Brown recently instated a $500 fine for wasteful uses of water, and Californians aren't exactly in a position to be dumping several gallons of water on themselves. After all, they're being encouraged to skip showers and aren't allowed to wash their cars (unless, of course, they use "a self-closing, water shut-off nozzle").

A staggering 95 percent of California is locked in a drought — one of its worst since 1580. And if conditions hold, the state could be in for what scientists fondly call a "megadrought," one that has the potential to last up to a century.

And it isn't just California. According to the U.S. Drought Monitor's map, the majority of the west coast is suffering from varying stages of drought, from moderate to exceptional. Several areas of Texas are also affected, with parts of the central and northern regions of the state classified as exceptional drought pockets.

But that certainly hasn't stopped people from continuing to participate in the challenge, including Brown, who, in an effort to save himself from a case of the shivers, decided to use his corgi as a stand-in. This may have been to distract Californians from the fact that their own governor was wasting water by using the classic but-look-at-how-cute-my-corgi-is trick.

Ironically, and super awkwardly, poor Sutter the corgi took the Ice Bucket challenge in front of what looks a lot like a water conservation sign in front of California's capitol building. But to be fair, it doesn't look like Sutter had to endure more than a couple cups of water, which he took well enough.

But regardless of the amount of water in use, for some Californians, like Stephanie Baer, a California native who writes for the Chicago Tribune, it's the principal that's drawing criticism. Baer writes,

Water isn't a prop. It's a precious resource. And if climate change and recent events are any indicator, our water supplies are fragile.

While some of her Californian friends have accepted the challenge, Baer notes that others have responded with this cheeky (but appropriate) line: "Sorry, we're in a drought."

Others have been more aggressive in their opposition to the challenge, taking to Twitter to express their malcontent. And Ricky Gervais, who I always rely on to provide me with my daily dosage of sharp wit, had the following to say about the Ice Bucket Challenge: "Dear celebrities, OK, now that's enough. Please stop pouring lovely fresh water over your heads - Africa."

Even if you don't want to completely spoil your fun, there are other ways of doing the Ice Bucket Challenge that aren't as wasteful. In an interview with The Wire, Steve Fleischli of the Natural Resources Defense Council suggested several viable alternatives, like completing the challenge in the shower or even on your lawn (maybe run around your lawn while you're doing it to become a human sprinkler system).

Still others have taken to pouring sand on their heads instead of water to highlight both the ALS Foundation as well as the deepening water crisis.

And if giving is just your thing, there are a number of water charities and organizations that you can donate to in addition to the ALS Foundation. Charity: Water, Three Avocados, Water.org, MIYA, and WATERisLIFE are just a few organizations dedicated to water conservation and bringing water to communities in need, both in the United States and abroad.