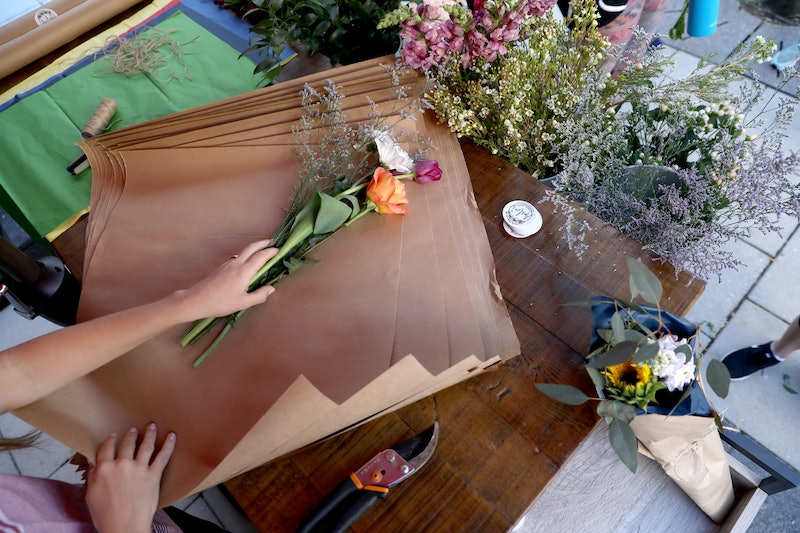 Whether you like to admit it or not, somewhere along the way, I bet you've stumbled onto Pinterest and liked it a lot more than you expected to. One minute you're searching for a recipe for that new health kick you're on, and the next you've found your ideal engagement ring. It happens to all of us; don't feel bad about. While some of us like to spend our downtime browsing through fashion and food inspiration on the site, others simply use it occasionally to pass the time while on the elliptical or in a waiting room.

Me? I'm either NEVER on Pinterest, or on a full-out Pinterest kick. Inspirational quotes? Absolutely. Engagement rings galore? Yup. "Ab-blaster" exercises I will almost definitely never carry out? Dozens. Pinterest may be a very specific social media platform when you consider that its main audience is primarily women, but despite that, it's insanely popular. And, like I said, that popularity sucks you in eventually and next thing you know you're pre-making healthy lunches for the children that you don't even have yet.

When you've spent time on Pinterest, you begin to realize that there's a handful of people you see again and again. Like anything else, you'll have all the in betweens and exceptions, but generally speaking, you always see the following people posting again and again. Here's what they look like.

1. The Wedding-Obsessed Girl Who Is Still Single And/Or In High School

This is number one. It's fair to say that almost every girl has a wedding board of some type. What if you're single? 12 years old? It doesn't matter. But I would just like to do a PSA for all of the high school girls I see pinning things on their "I Do..." and "Marry Me" boards. Where's the "I'm Going To College In Two Years" boards? Or how about "My Future Life/Career/Apartment/Anything"? Let's balance it out a little, guys! Alright, so most girls dream about their wedding at one point or another, and wedding planning is sort of an inherent part of Pinterest (I, too, pin oodles of engagement rings at times), but slowing down with all the planning wouldn't hurt anyone.

Once you get a Pinterest, you suddenly realize that, somehow, half the people you know are teachers. You have no idea when this happened or how it happened, but it's a reality.

The other day a friend of mine asked me, "Has ____ gained weight or something? Have you seen her lately?" I didn't know, I said. "Why?" "Oh, she's been pinning so much work out stuff." Ok, so maybe not the most meaningful conversation I've had lately, but there's always that one person who suddenly starts pinning dozens and dozens of healthy recipes and "Nothing Taste As Good As Skinny Feels" inspirational graphics in bold, scary coloring.

Juxtaposed to the health nuts (or the "I desperately need to get in shape" nuts), is the people who post things that make being healthy so incredibly hard. You know how difficult it is to go on Pinterest and see two dozen posts about glute-burning power exercises you can do at home, only to have them followed by ONE picture of a fried macaroni and cheese pancake or something. It's all over then. Suddenly all that health-inspiration pinning you've done is undone... all because some foodie had to post a delicious recipe. Do you know how to make that recipe? No. But you can eat chips. So you do that.

There's always that intense hipster that ends up on Pinterest and makes you think, "Woah, Pinterest really is all-reaching..." Sometimes the site tends to be overtaken by preppy, "Look at this nautical skirt I want!" posts if you're not careful about who you follow (nothing wrong with an anchor-printed skirt, by the way), so when you see the hipster posts coming through, you can't help but think "Wait, they're on here?" They usually post things like short poems from Tumblr and watercolor art. And, like the anchored skirt, there's nothing wrong with that either.

THEY. ARE. SO. POSITIVE. AND HAPPY. AND PRODUCTIVE. They like quirky, cursive fonts and short, witty statements that inspire joy and productivity. I am this person sometimes and, just so everyone knows, usually I am just pinning them to get me through the day without getting food from the vending machine and/or subtweeting something extra sassy. So try not to judge too much.

This is the person that Pinterest was made for, I think. It's almost as if sororities are behind most of what goes into Pinterest. This, of course, is not true at all, but like I mentioned earlier...because Pinterest is so popular with that demographic, one always ends up following one (or twelve thousand) person/people who post nothing but "I would like to have a summer house in Nantucket, two kids who wear tiny searsucker suits, and a golden retriever named JFK"-ish pins. Sometimes it's annoying and sometimes it just makes you think, well, a summer house in Nantucket sounds pretty magical.

8. The 'I Have No Idea How This Works' Person

We've all seen it. Maybe it's an older person, or just a Pinterest newbie. Either way, this person has no clue what is happening. They are pinning links to tragic CNN stories on wedding boards. They are naming their boards 'Pinterests.' They may not even HAVE a wedding board (are they still allowed on the site?). Usually these people disappear after a week or two, frustrated by the inundation of preppy agendas and inspirational quotes. They'll be back, though.

9. The 'Woah, I Didn't Know They Were Into That' Person

The other day I saw a pretty outwardly conservative acquaintance of mine pin something that simply said "less stress, more sex." Is there anything wrong with this? No, of course not; to each their own. But Pinterest offers you a glimpse into the minds of so many people you think you know. For example, in my case, now my followers know that I am extremely interested in making chia seed pudding and toning my inner thighs. Granted, this isn't 100 percent true, 100 percent of the time, but the initial thought to make the pudding is there. I think that's what counts, right? Whether people are posting is an accurate portrayal of their interests or not, odds are that there's always going to be person who surprises you a little, or a lot.