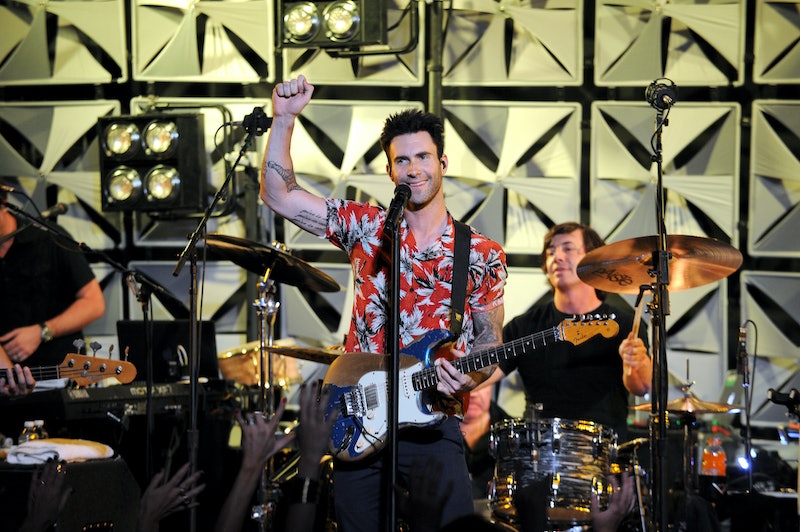 It's here. On Friday, Maroon 5 premiered their new single "Animals," and I have some seriously mixed feelings about it. Although the song is insanely catchy (like, insanely), it features some . . . interesting lyrics that I find a bit problematic. Additionally, the lyric video for the track depicts a bunch of sneaky snakes slithering around, preparing to attack an adorable bunny! I demand to know who thought up such a savage and unwholesome concept!

Idolator reports that "Animals," which serves as the second single from Maroon 5's upcoming album, V, was produced and co-written by "Payphone" hit makers Benny Blanco and Shellback. So, if you liked the band's last album, Overexposed, chances are you'll like "Animals," too. Well, if you can get past the lyrics, anyway.

"Animals" doesn't pull any punches. The track kicks off with its chorus, which means that Maroon 5 front man Adam Levine hits you straight in the face with a fuck ton of awkward right from the get-go:

Baby I'm preying on you tonight

Hunt you down, eat you alive

Maybe you think that you can hide

I can smell your scent for miles

I mean, I realize the song's called "Animals," but "Hunt you down, eat you alive"?

"Maybe you think that you can hide"??

"I can smell your scent for MILES"???

Later, Levine sings about a woman who wants to stay away from him, but just can't because her attraction is simply too strong:

Yeah, you can start over

You can run free

You can pretend it's meant to be

But you can't stay away from me

The predatory nature of "Animals'" lyrics, coupled with the fact that we have yet another man in pop music presuming to know what a woman wants, makes for a potentially unsettling listen. If you're paying close attention to the lyrics, that is. Admittedly, it's pretty easy to get whisked away by "Animals'" infectious melody and "lie-lie-lie's" and "ny-ny-ny's." Take a listen to the song below.

BUT WAIT. I almost forgot about the most horrifying line:

Y'all. Maroon 5 needs to chill.