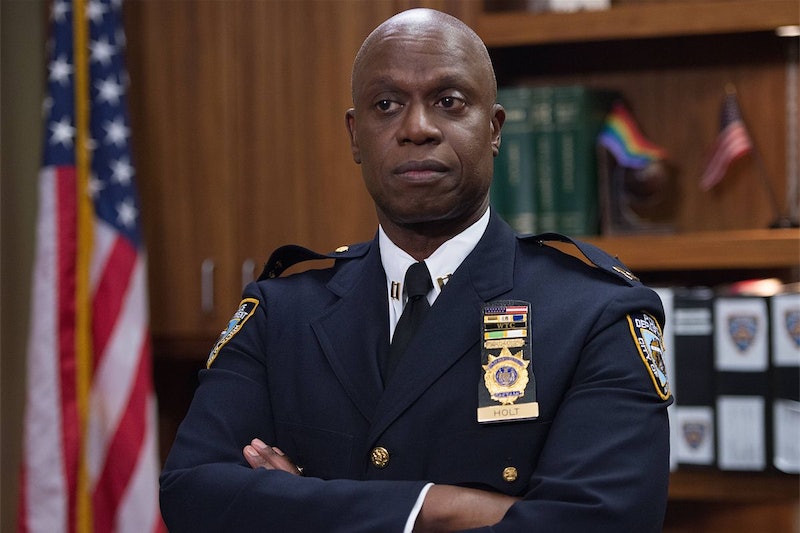 If you're not excited for the Emmys this coming Monday, here's a very good reason to be: Brooklyn Nine-Nine 's Andre Braugher has been nominated for an Emmy for his role as police chief Captain Ray Holt in the series. This is a huge deal for a few reasons: One, not only is Braugher portraying a black, openly gay man in the series (something that is hardly seen on television), but his character is also not at all defined by his homosexuality. The fact that he's gay is mentioned, of course (we meet his husband at one point, a university professor named Kevin Cozner) but it's not discussed often or used as a prop for storylines and drama. He's just a man who happens to be a police chief, and who happens to be gay — as far as his character development is concerned, identifying as a gay man is just one facet of who he is.

This (and the fact that Braugher was nominated for an Emmy for it) is so important, and yet, still seems to be uncommon on many shows. While there's no denying that the increase in LGBT characters on television in the recent decades is a step in the right direction to promote acceptance, tolerance, and understanding, we still see too many dramas ( Glee comes to mind instantly) that create entire characters' storylines based around their homosexuality.

Kurt Hummel, for instance, is a great character, and Chris Colfer is an even better actor. But, how many times has Kurt's storyline seemed to revolve around his homosexuality? We know he has more defining features than his sexual orientation — we know he's a damn good singer, and smart to boot. Why is it that in an effort to promote further acceptance and to diminish tired stereotypes that have plagued the LGBT community for years, characters with any sexual orientation that differs from heterosexual suddenly becomes all they are?

The fact that Brooklyn Nine-Nine has created a character with Captain Holt that is not only gay, but also a man in a position of power, with an amazing history and stellar performance at his job not only promotes acceptance, but it also points out what shows like Glee seem to forget: A person who identifies with the LGBT community is defined by much more than just their sexual orientation.

Thankfully, Brooklyn Nine-Nine isn't the only show that has recognized this. Orphan Black had a great scene between clones Cosima Niehaus and Rachel Duncan (both portrayed by the immensely talented Tatiana Maslany) during season 2, episode 2, which referenced the fact that Cosima identifies as a lesbian woman. The audience already knew of Cosima's sexual orientation from season 1 (when she began a romantic relationship with her handler, Delphine Cormier — also without any major speeches or plotlines surrounding the fact that Cosima is gay), but Rachel, upon finding Cosima and Delphine in a compromising position, brings it up:

COSIMA: "My sexuality is not the most interesting thing about me."

That response, right there, is flawless. And it's true. There is much more to Cosima than the fact that she likes girls — Cosima is a scientific prodigy, she's a genius, she's quirky, she's beautiful, she's sarcastic, she loves good music, and she's unbelievably witty during conversation. There was a scene where she literally was inches from her death bed, and she Macgyver'd weapon out of a fire extinguisher and a pencil in an effort to save her sister clone Sarah. Rachel was being downright disrespectful starting up a conversation with Cosima, one of the first they'd ever had, by pointing out her sexuality before the fact that she's a damn good scientist. And Cosima answered perfectly, because she knew that. This is how television shows should handle it.

Sons of Anarchy managed to pull off a similar feat, only the character in question actually identified as a transgender female: Venus van Damme (portrayed by Walton Goggins). Not only does the show throw away any stereotype one may have about biker gangs (the guys treat Venus with respect, and they use her preferred gender pronoun, "her," "she," etc. — something that people who don't have the stereotype of being bigoted sometimes can't even muster the ability to do), but Venus also ends up becoming the romantic interest of a character in the gang named Tig. This development is immediately accepted and barely discussed, just as it should be. It's normal. Instead, we get to learn more about who Venus actually is: Her history, her personality.

Any show that addresses a transgender character like this — as just another facet of who he or she is — is doing it right.

It may feel like a show is understating a character's sexuality if they handle it in a way like these shows did, at first — after all, many teens who identify with the LGBT community struggle at a young age with their sexual orientation and gaining the acceptance of themselves and those around them. But that's exactly the point I'm trying to make here: By normalizing the fact that someone is apart of the LGBT community and making it just one facet of their character (in other words, fleshing the character out past, "oh, they're gay!") on television, it's promoting normalizing it in the real world, and, thus, hopefully diminishing any struggle someone goes through when discovering their sexuality.

For instance: This isn't about sexual identity, but the message applies. When 12 Years a Slave star and Oscar-winner Lupita Nyong'o participated in an actress roundtable discussion for The Hollywood Reporter with Oprah Winfrey present, she revealed that, at a young age, it wasn't until she saw Winfrey in The Color Purple that she realized she could pursue her dream of being an actor. Verbatim:

When I was a little girl, I was always acting, and the first time I thought I could be an actor was when I watched The Color Purple. I mean, I grew up in Kenya, and a lot of our programming was from all over the world, and we didn't see ourselves on screen. So it was very rare that you see a world just populated with people that look like me. And there was Whoopi Goldberg, and Oprah and everything, and they were doing this thing that just — just called me.

Because being gay, or transgender is normal. Why shouldn't it be treated as such on television?