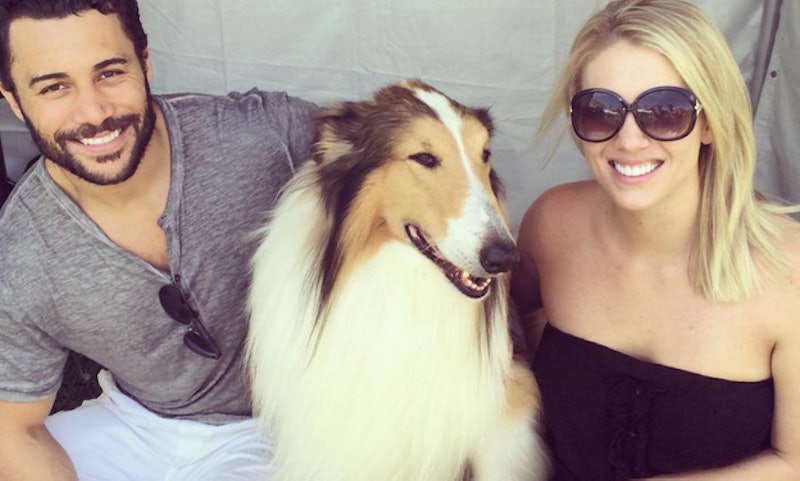 Hookups on reality TV shows are as inevitable as bar fights on reality TV shows. When seven (young and hot) strangers are picked to live in a house (with copious amounts of booze), for instance, their taped lives will almost certainly include varying degrees of physical expression. On The Real World: Ex-Plosion, the odds of cast members hooking up was both increased and decreased by the fact that their exes moved into the house. The rockiest relationship on TRW: Ex-Plosion was the one between Jenny Delich and Brian Williams Jr. They broke up in the final episode only to announce their reunion at, well, the reunion show. In fact, they didn't just get back together, they announced they were making the (terrible) decision to move in together. But that was all the way back in April, and goodness knows reality show romances have the ability to fizzle quicker than you can say "start getting real." I mean, Brian legit broke Jenny's bed frame during the finale in order to ward his machismo over cast mate Cory, whom Jenny was hooking up with.

That said, these two had been together for a whopping five years before the show. They met in Kansas City and broke up when Jenny decided to move to Los Angeles. Geography broke them up, not lack of feeling. So, where are they now? I popped over to Jenny's YouTube channel "Jenny Delish" (so clev) for the answer.

The most recent video "ROADTRIP! LA TO KC" documents Jenny and Brian's pilgrimage to where they first fell in love. According to the Jenny's caption, "Since I'm doing Youtube now, I didn't see the need to live in LA anymore." Wise career move, homegirl.

The video is 15 minutes long, so I'll just sum it up for you on the assumption that you value your time. We open on Jenny in bed, declaring "fuck this shit" with regards to having to wake up. Then she vacuums and asks Brian if he is excited to move, to which he replies, "Not really." Montage of them packing up the car. Discussion of what "gristle" is. Brian performs "Peaches" by Presidents of the USA. When they hit Colorado, they both have to pee and talk about it. They pee. Jenny asks her cat, Chief, if he's enjoying the road trip. Chief doesn't respond because he's a cat. Their tire blows out. They wait on the tow truck and use "a wooden thing" to pull the car up. "Finally fucking made it," Jenny declares 30 hours into their journey.

That's actually only halfway through the video but honestly I couldn't stomach another second. In conclusion Jenny and Brian are most definitely still together, but think they're way more interesting than they are.