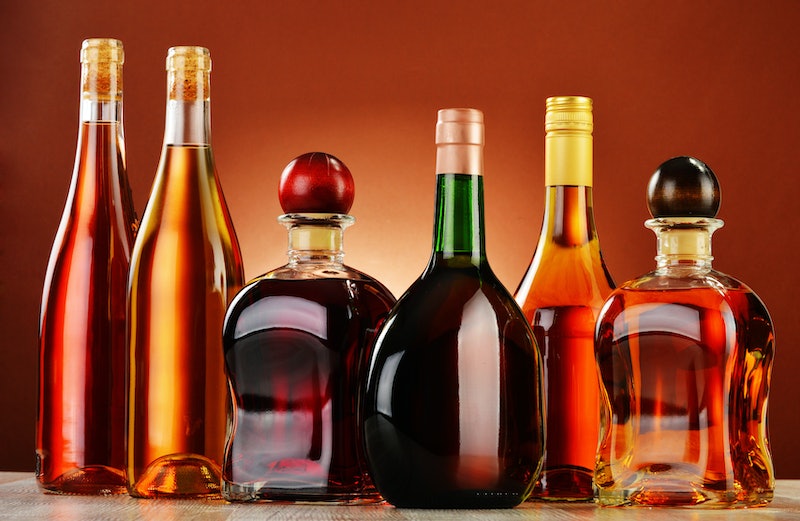 No one is going to argue that alcohol is good for you, but it is possible to make healthier choices. Leah Kaufman, MS, RD, CDN helped me to answer our most burning questions about everyone's favorite liquid: Which have nutrients, which have none at all? Which are high in carbohydrates? Which have health benefits? Here’s a handy guide to how different types of alcohol stack up health-wise so that even on the hardest nights of partying, you'll make smarter decisions (about what you drink, at least).

According to Kaufman, “Wine is the most calorie friendly alcohol option." One ounce contains 20 calories, and one five ounce glass of most types of wine usually contains 100 calories. However, she warns that dessert wines may be slightly more, as they are much sweeter. Another perk for oenophiles: Wine also contains antioxidants, which some studies report may be good for your heart. According to Kaufman, studies show that the antioxidants in wine increase HDL (good cholesterol), which helps to protect against heart disease, and Resveratrol (found in the skin of red grapes) decreases LDL (bad cholesterol) and the formation of blood clots.

Another perk? According to Dr. Steven G. Goldberg, D.D.S., the flavan-3-ols in red wine have been shown to reduce bad bacteria in your mouth. So red wine even has mouthwash-like benefits!

“One and a half ounces of hard liquor — that is, brandy, whiskey, vodka and gin — usually contains a little less that 100 calories,” Kaufman says. The catch, however, is a familiar one: Because hard liquor is often mixed with sugary juices or soft drinks, Kaufman notes that these add-ins quickly up the calorie counts to much higher numbers than 100. “Most bartenders do not measure this alcohol and are likely pouring more than 1.5 ounces, which further increases the total calorie count,” she adds. And when it comes to cocktails, the sweeter the drink, the more likely we are to drink lots of it.

When deciding on mixers, Kaufman recommends sticking to clear liquids. “I always tell my patients that seltzer, water, or diet tonic are the way to go,” she says. For a pinch of flavor add freshly sliced fruit, mint leaves, sliced cucumber, or even jalapeno.

Tequila is Kaufman's liquor of choice. Tequila is made from agavin, a naturally occurring sweetener which some studies show can help lower blood glucose levels. Plus, since tequila is naturally sweet to taste, it can be enjoyed by simply adding soda water and a splash of lime instead of dumping in lots of margarita mix, which Kaufman says "makes “one 5-ounce margarita more than 300 calories.” Tequila is also gluten-free, making it a good option for celiacs.

“Beer is my least favorite choice,” Kaufman says. Most beers contain up to 15 grams of carbohydrates, which is equivalent to the amount you get in one slice of bread. And since people often consume more than one beer at once, you're usually getting several slices of bread.

Also, while most brands of alcohol are created equal when it comes to nutrition information, Kaufman explains, “Some hard liquor options are gluten free and others are not. You have to do your research if you're gluten intolerant to find out which ones are best for you.”