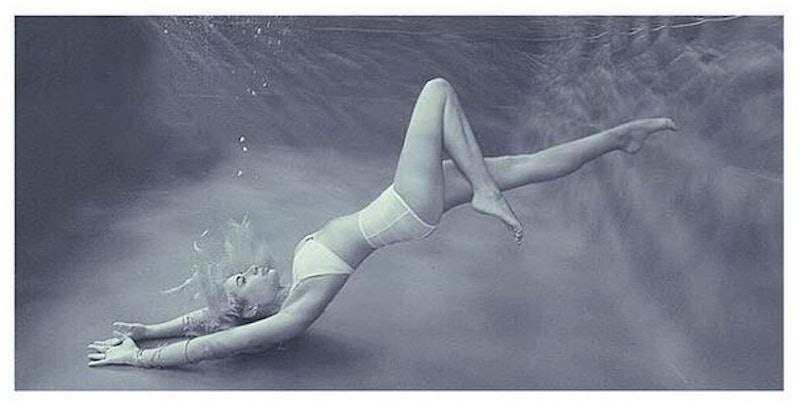 And fighting today in the body positivity corner, we have Australian model Meaghan Kausman. Kausman is a proud size eight — which is why she was so taken aback to find that a swimwear company she had recently modeled for had seemingly Photoshopped her down to a smaller size. She was not happy about it (and rightly so); she also, however, decided to do something about it. Kausman called out the company, Fella Swim, on her Instagram page, posting both the original image as shot by underwater photographer Pip Summerville and the altered version — and taking the best kind of stand in the process. Ladies and gents, meet our newest body image superstar.

“Making art is my passion. Creating beautiful photos and meeting inspiring people has really given me a new lease on life,” Kausman wrote when she posted the images. “I recently did a photoshoot wearing Fella Swim, with an extremely passionate and talented underwater photographer, Pip [Summerville]. Her photos are magical; they capture women in water and celebrate their beauty.” But last week, she found that Fella Swim had uploaded a different version of one of the images Summerville had shot. “They had drastically altered my body, thinning out my stomach and thighs in an attempt to box me in to the cultural idea of beauty.” Here are the images, with the altered one on top and the original one on the bottom:

Why the Photoshopping? No idea. Kausman is beautiful, as is the original photo. “My body is a size 8, not a size 4,” she wrote. “That’s my body! I refuse to stand by and allow ANY company or person to perpetuate the belief that ‘thinner is better.’ All women are beautiful, and we come in different shapes and sizes! This industry is crazy!!!! It is NOT OKAY to alter a woman’s body to make it look thinner. EVER!”

The image in question doesn’t currently appear on Fella Swim’s Instagram page, though they did apparently apologize on their post of the image before they took it down. According to The Courier Mail, they wrote:

“Meaghan is actually incredibly beautiful and we love the original image by @seagypsea_photography. We meant no disrespect for photoshopping the image and apologize that it has offended some people here.

“Unfortunately like most magazines, media and images you see on here, the girls have been retouched to look, taller, thinner and different to what they really [sic], and yes, all to see a product.

"Apologies to @meagsk you have made a point of us and we will remove the image. If we knew this would upset you, we would of [sic] never posted it.”

…I don’t know, guys. It kind of sounds like a non-apology to me — the sort of “Sorry you’re so sensitive” type that puts the blame on everyone else, rather than owning up to their gaff themselves. Sure, Photoshop is the norm — but that doesn’t mean it should be the norm, or that it excuses them from perpetuating the problem.

Kausman, Summerville, and Kausman’s father, body acceptance campaigner Dr. Rick Kausman, made an appearance on Australian news program Weekend Today on August 24. “People need to know that that’s not what people look like,” the model said. “It’s really important for young girls and young guys know that that’s not something for them to strive for.” Summerville, meanwhile, commented that while she Photoshops her images to some degree — “I’ll enhance an image to make it a little bit brighter, just to bring out the colors” — but she definitely doesn’t do it to the degree that the Fella Swim image ended up undergoing. Catch the whole thing here:

I salute you, Team Kausman. We need more folks like you. Because the Photoshopping? It has to stop. Seriously.

More like this
I Have Eyebrow Alopecia – & Microblading Gave Me My Confidence Back
By Jessica Morgan
Olivia Munn Got Real About How Her Body Hasn’t “Snapped Back” Post-Pregnancy
By Stephanie Topacio Long
23 Times Meghan Markle Dressed Just Like Princess Diana
By Bustle UK
42 Black Owned Fashion & Beauty Brands To Support Today & Always
By Mekita Rivas, Shea Simmons, Kui Mwai and Dominique Norman
Get Even More From Bustle — Sign Up For The Newsletter