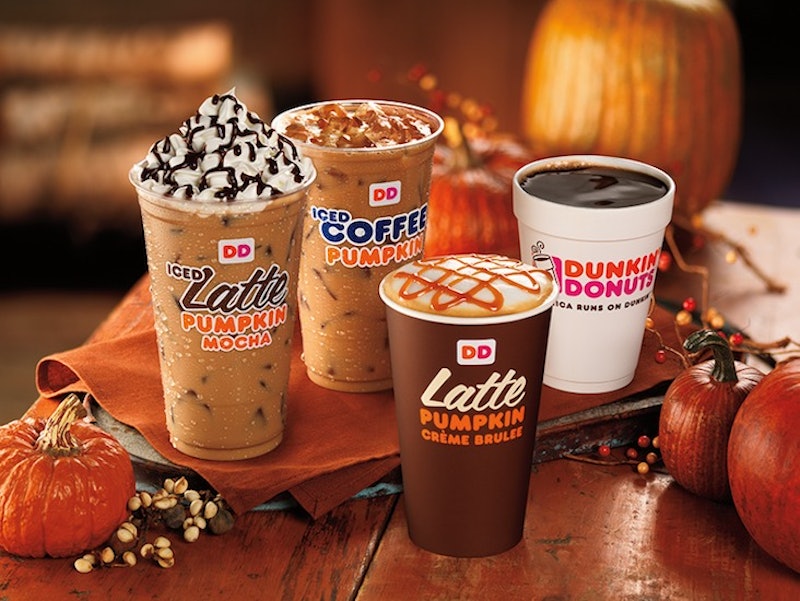 As it turns out, Starbucks won't be the only globally known franchise selling one of its fall favorites, the Pumpkin Spice Latte, early this year (and by "early," I mean today). Dunkin' Donuts pumpkin products from their fall lineup hit the market today as well. Do I smell competition in the warm, summer (definitely not fall yet) air?

According to Business Insider, the doughnut franchise will start adding pumpkin products from its fall lineup to its menus today — all of which will be available starting September 1. But there's more. On its website, Dunkin' Donuts announced it will be adding a new product to its limited-edition autumn menu: the Pumpkin Crème Brûlée coffee and lattes. The company will also be bringing back old favorites, like the pumpkin coffee and lattes, pumpkin pie doughnuts, pumpkin doughnuts and munchkins doughnut-hole treats, and pumpkin muffins.

Now Dunkin' Donuts and Starbucks aren't the only companies offering pumpkin-flavored products before Labor Day. USA Today notes that pumpkin-flavored beers are finding their way onto shelves currently as well — and rumor has it Oreo will be offering a pumpkin spice–flavored cookie this fall (so tomorrow, probably). What gives, world?

Seeing as Dunkin' Donuts was a little vague on its website as to which pumpkin products would be available today, I had to go see for myself. That and the prospect of eating something called a "pumpkin pie doughnut" sounded too good to be true. Unfortunately, the nearest location to me only offered the pumpkin lattes — so if you were also hoping to get something other than just a pumpkin-flavored coffee, you might have to wait another week. In the meantime, feel free to drool over pictures of the Dunkin' Donuts fall lineup, coming to a location near you for sure on September 1: