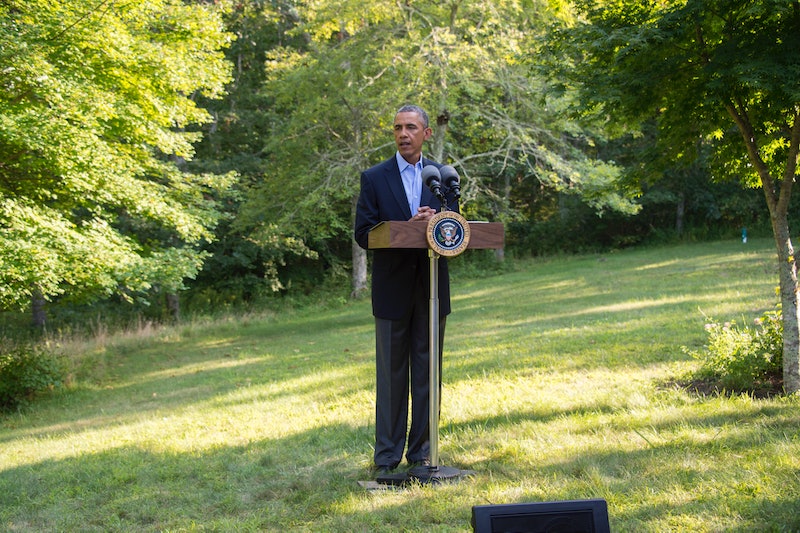 In her memoir Hard Choices, Hillary Clinton may cover her 2008 primary loss to President Obama and her tenure as Secretary of State — but she also shares some pretty sound advice that I wish President Obama heard before he went on his disastrous vacation to Martha's Vineyard these past two weeks: Don't vacation in August, says Clinton.

During her transition to her role as Secretary of State, Clinton writes that she had a string of meetings with past Secretaries. Hillary adds that former Deputy Secretary of State Warren Christopher gave her one piece of solid advice:

Don't plan vacations in August, because something always seems to happen that month.

Well, I wish someone had told the President that! President Obama returned from a his vacation Sunday, and I think it's safe to say that a lot happened while he was (sort of) gone. Right before Obama left, he ordered airstrikes against the Islamic State in Iraq (ISIS). While he was gone, there were mass protests in Ferguson, Missouri, following the shooting of unarmed Michael Brown. Days later, a video of journalist James Foley's brutal murder at the hands of Islamic State militant operatives was released by ISIS.

At one point, Obama returned to Washington for 48 hours to address Ferguson and activities in Iraq, and over the course of the vacation he addressed the nation six times, on Iraq, Ferguson and Foley.

Just makes you wonder, Is this truly a pattern? Does "something always seem to happen" in August? Yup. A few examples of why politicians may want to aim for a June or July vacation...

In Hard Choices, Clinton – or Former Deputy Secretary Warren Christopher – cites the Russian invasion of Georgia in August 2008 as a clear example of "something" happening in August.

While President Bush was at his ranch in Texas, Hurricane Katrina reached New Orleans on Aug 29, 2005.

After hearing about the hurricane, Bush kept his plans to go to other states in the nation for his Medicare Prescription Drug Program. He later called that decision "a huge mistake."

On Aug 2 1990, Saddam Hussein led the Iraqi army's invasion into Kuwait. President George H.W. Bush had been planning a trip to his family home in Maine for 25 days that month.

Regardless, President Bush went on the vacation, frequently telling the press that he and his team were handling the situation.