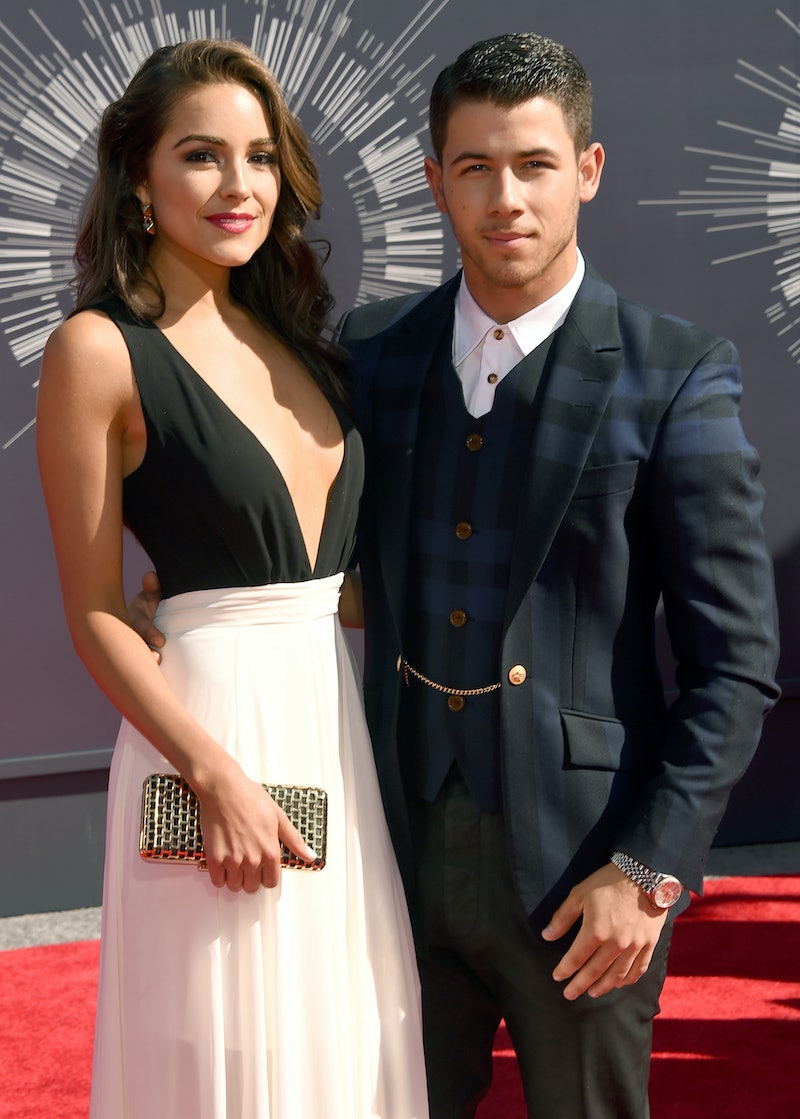 All of the JoBros have been serial relationship people since they were teens. The youngest of the three musical brothers is no exception. Sunday night, Nick Jonas showed up to the MTV VMA's with an attractive young lady on his arm who, in a break with Jonas' romantic track record, is not a pop star. So who is Nick Jonas' girlfriend Olivia Culpo? Well, she seems to be good at pretty much everything. Culpo could probably have been a musician if she wanted to, but she went on to become Miss Universe 2012.

Culpo is a Rhode Island native, the child of two music professionals, and a classically trained cellist and vocalist. She attended an all girls Catholic school in her home state called St. Mary's Academy - Bay View, and won high academic honors in her time there. Throughout her young life of 22 years, Culpo has been strongly committed to music. She grew up playing in various youth ensembles and orchestras around New England, and even played at Carnegie Hall. Choosing to pursue her music training further, Culpo attended a prestigious music institute called the Brevard Music Center for two years. Check her out below playing the cello in her "Road to the Crown" interview for the Miss USA 2012 pageant. She's kind of a beast.

Furthermore, she can sing! Listen to her riff a few lines from "New York State of Mind."

Given that she comes from a family of artists, you could probably guess that Culpo didn't grow up in the Toddlers in Tiaras circuit. Actually, the pageant thing just sort of happened to her. As she says in her "Road to the Crown" interview, she craved the world of female camaraderie that she felt while attending her all-female school growing up. The very first pageant she entered ever was in 2011, when she competed in the running for Miss Rhode Island. She wore a dress that cost her 20 bucks and had a rip in the back. Take that, multimillion dollar pageant dress industry!

Not bad for a chick who was just giving it a whirl, eh?

If it wasn't for that fateful decision she made to embark on the pageant journey, she never would have met Jonas. According to the Daily Mail, Culpo and Jonas met when he hosted the Miss Universe pageant in June 2013. The 2013 Miss Universe pageant marked the end of Culpo's year as Miss Universe, and while she may have passed on the crown, she gained a love interest. The pair was seen afterwards flitting around New York going on ultra-romantc, Lady and the Tramp-style dates. In September of that same year, the couple was photographed getting all canoodly at the US Open. Basically, this was their DTR moment to the public. Joe Jonas went on to confirm their relationship in an interview with Joan Rivers.

Since then, the two love birds have appeared all over the place together. Most importantly, they are all up on each others social media. Here they are donning some festive leis on what is most likely a Hawaiian escape.

And here they are expressing extreme tenderness for one another in a series of darkroom photos.

What's more, here they are on Olivia's 22nd birthday. Riddle me this, why are there clearly not 22 candles on this cake?

I'm imagining that the Olivia/Nick season of Married to Jonas would consist of her waking up, deciding to run for senate on a whim, winning, then going on to the race for president. Nick would wear fedoras, and look on supportively.